We had twenty three racers to try out WHO/digital, including first-time WHO racers David, Fin and Mike B.

The evening started with an intensive digital driving school session, with racers learning how to change lane, drive cars together on the track and to refuel.

At 7.30pm, track power was switched off and Mike D gave a drivers' briefing for the main event of the night - an eighty minute team endurance race. Team captains were picked and drivers allocated - with five teams of four and one team of three.

The race would be run in four twenty minute segments, with each an individual race in SSDC. A 60 second driver change 'window' straddled every five minute mark, so that drivers would run for one stint of four to five minutes in each race.

At the end of the segment, the team who'd won swapped cars with the sixth place team, second place swapped with fifth and third swapped with fourth.

Race 1: That first segment was a true learning experience for all the teams and all the drivers. The 'no-contact' rule was a tough one to get used to - and a lot of drivers were finding it hard to lane change into the penalty pit lane (where they missed a lap). Plenty of cars were running out of fuel on the track and limping back to the pit lane. And even the basics - like staying on the track - were a challenge.

The scores for that first segment reflect the steep learning curve. Race Control managed just 97 laps, by far the lowest winning score of the night. However, everyone looked as if they'd had a brilliant first twenty minutes of competitive digital racing and were looking for an improvement in their next stints.

Race 2: With cars swapped, the lights went green a second time. Three teams - Blue Blurs, Race Control and Team Rambo - really seemed to click in this session. Smooth driving and staying out of trouble was the name of the game. And there was still a lot of trouble to avoid! By the end of the segment, Race Control held a two lap lead over Team Rambo, with Blue Blurs winning Race 2 and closing up to just 14 laps behind the leaders.

Race 3: The race for the win became intense in the third segment. Team Rambo equalled Blue Blurs 108 laps from race 2 - which would remain the top score of the night. That put Team Rambo a lap ahead of Race Control. On the track, the racing was settling down with fewer crashes and only a handful of contact penalties handed out.

Race 4: The tension and excitement in the room reached fever pitch for the last twenty minutes. It was a brilliant race through the field with five out of six teams smashing the hundred lap mark. The aptly named 'Oh Bugger I Hit Him Again' won the segment with a score of 106 laps, with the two Mikes and Stephen finally hitting their stride. It wasn't enough to catch Blue Blurs in fourth, with John, David, Fin and Alex regretting a disastrous first segment, without which they could have been contenders for the win...

Behind those two teams in sixth were Red Robins. Simon, Jonah, Tyler and Paul just couldn't hook things up all night - but they will have learned plenty. Without their awful first segment, a better finish would have been on the cards. Yellow Dogs - Dave, Duncan, Jay and Richard - were able to consolidate the third place that had been theirs since Race 1.

So that just leaves the battle for the win. Team Rambo looked to be in pole position with their lap lead, but nerves would come in to play for both teams - especially as the pressure mounted. Race Control took an early lead over their main rivals, but were never able to stretch it beyond a couple of laps.

Pit stops, penalties and crashes saw both teams tumble down the leaderboard and then recover back up again. Going into the final stages, nerves certainly became frayed! The lead in the battle for the overall win continued to change. Race Control needed a two lap margin, but as the chequered flag fell, that gap was just one lap and the total scores after eighty minutes were identical.

A brief captains meeting decided that the tie-breaker should be a comparison of the finishing places in each race. With a win, two seconds and a third, Race Control had the advantage. That meant Mike, Ned, Ash and Andy were the winners - and Gareth, Andy, Matt and Ollie were already plotting their revenge for next time.

It was a highly enjoyable evening at the Barn and a brilliant introduction to Scalextric digital and SSDC racing. The unanimous verdict was that there must be more. 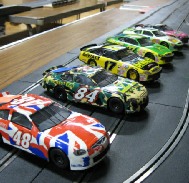 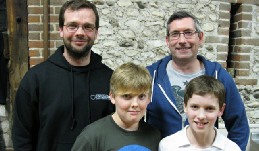 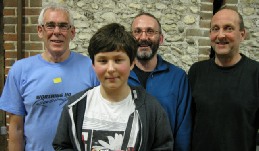 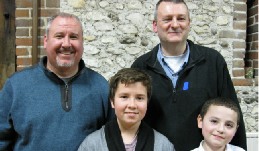 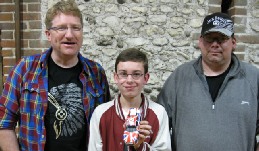 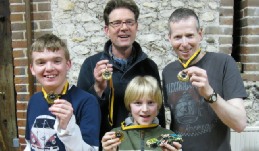 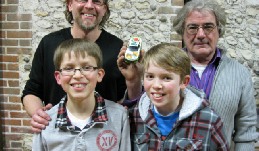 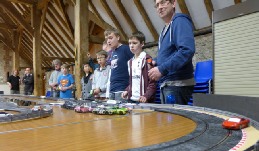 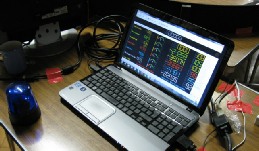