It was a cracking evening at the Barn with 37 people coming along and 29 racing. The new AFX Mega-G+ cars survived the evening and were fast and fun to drive. The racing was exciting, with the result in the balance right until the end…

After some nice local press coverage, it was great to welcome a bumper crowd to the Barn for our first AFX Endurance Championship team race. We had thirty-seven people through the door, twenty-nine racing and another eight spectators enjoyed what they saw and wished they'd come along earlier to race. There's always next time...

For the new championship, it was fitting that the beautiful AFX Peugeot 908 HDi FAP Le Mans prototypes were racing on a big, 22 metre-long replica of the Le Mans circuit. However, for the half-hour practice session, it was the club's Micro Scalextric Nissan club cars that took to the track. The Peugeots were kept pristine for the race.

The twenty-nine drivers were allocated to seven teams - six teams of four and one of five, with Daryl and Isaac sharing a seat. Each team was captained by a junior racer, supported by one 'seeded' racer and at least one novice driver. The hope was that the teams would be reasonably evenly-matched as they raced for fifteen minutes on each of the four lanes - one hour in total.

The eagled-eyed captains learned a lot from the first fifteen minutes - blue lane was wonderful, red and white not bad, but yellow was most definitely tricky, not helped by a rather too punchy controller. Still, it would be the same for all the teams. Success would come from getting the most out all four of the lanes.

It was no surprise that the two teams starting in blue lane led after 15 minutes. Top of the pile were Finlay's Skeleton Crew - Finlay ably assisted by the two Mikes and Barry - a whole nine laps ahead of Rachel's Power Wheels, featuring Rachel alongside Keith, Ash, Isaac and Daryl.

Best of the rest were the Hot Rods, who'd done great in white, just behind Power Wheels. In fourth - and also in white - were Donald Trumped, followed by Don't Steal My Team Name v.2 (red) and Van Ryan's Express, who'd set a good score of 108 laps in yellow. Bringing up the rear were Daemon Hill, who'd had fifteen tricky minutes in yellow.

The Oreca Matmut car on blue lane continued to drive superbly. The Hot Rods - Oliver, Andy Player, Dave and Deborah - set an immense 144 laps, winning the segment and taking the lead by just one twentieth of a lap over the Skeleton Crew. Team Donald Trumped also had a productive fifteen minutes in blue - Alex, Neil, Dan and Daniel scoring an impressive 140 laps and moving up to third overall.

A gap of nearly twelve laps had opened from third to the Power Wheels in fourth. Von Ryan's Express moved up to fifth with an excellent 127 laps in white, ahead of Don't Steal My Team Name v.2 despite their own superb score of 112 laps in yellow. Daemon Hill - a strong-looking team of Aaron, Duncan, Terry and Andy Phillips - languished in seventh and last place, but they did have blue and red lanes to come...

The race was getting interesting and the captains were very aware the standings could change significantly, depending on what lanes their team had left to run. Oliver's Hot Rods did everything they could by stretching out a ten lap lead over Donald Trumped. They'd used up the best three lanes and were left with yellow - would ten laps be enough? Donald Trumped were in the same position - facing yellow last - so maybe the gap from first to third was more important. That gap was a huge twenty-six laps. Oliver was quietly confident.

The team in third after the third fifteen minutes were Von Ryan's Express. Ryan, John, Sharon and Stephen had slipped under the radar, but after solid scores in yellow and white, they'd jumped up the leader board with a 141 lap stint in blue. Daemon Hill had bettered that with 144 laps and moved up to fourth. Both would finish on red lane.

The two teams who'd driven the third segment with the Renault-liveried car on yellow lane had struggled, both scoring 93 laps. That dropped the Skeleton Crew to fifth and Power Wheels to seventh. In between them, remained Don't Steal My Team Name v.2 in sixth, despite another very good performance scoring 129 laps in white. That left them fifty laps off the lead, but finishing in blue lane...

The Barn is a particularly wonderful place when it is full to the rafters and we've got the finale of a team race looming. The atmosphere for this last segment was electric. What was going to happen? Well, the first things to happen were two big scores for teams in the first group. Daemon Hill hit the front with 141 laps in red - the top score of the night in that lane. Setting the best score on any lane - 146 laps on blue - were Don't Steal My Team Name v.2. Aiden's team had blitzed three top lane scores - in blue, yellow and white - but a poor opening fifteen minutes in red had wrecked their race and left them thirteen laps behind the Daemons at the end. Plenty of "what ifs..." for Aiden, Simon, Steve and Jamie.

In that first group, team Donald Trumped had flopped at the last hurdle in yellow, managing just 95 laps and dropping behind DSMTN v.2. Power Wheels recovered with a good 118 laps in white and waited to see how the second group got on...

The pressure was mounting on the Hot Rods, holding the lead going into the final fifteen minutes, but facing that tricky yellow lane. Team captain Oliver took responsibility for the first three-and-three-quarter minute stint and managed a solid 27 laps - if all four drivers did the same or a smidgeon better, it would be enough to move ahead on Daemon Hill. Oliver's younger brother Ryan started for his Express in red lane. They knew a top score might give them the race win. Ryan gave his team a great pep talk and they looked focused and determined on the track.

After Oliver's strong start, the Hot Rods wobbled. Andy took over last and had a lot to do. The Hot Rods ended on 105 laps, falling three laps short of Daemon Hill. Meanwhile, John had taken over for the Von Ryan Express. A strong, consistent performance from the entire team over all four lanes had put them in a nail-biting position. Could they do it? A score of 138 laps at the chequered flag looked good, but Daniel on race control needed to crunch the numbers and kept everyone on tenterhooks.

Finally, the official results were announced. In seventh were Power Wheels on 456 laps. Sixth were Skeleton Crew, a strong final run in white lane not quite enough to put them ahead of Donald Trumped in fifth. The two of them were on 488 and 485 laps. In fourth were Don't Steal My Team Name v.2 on 498 laps - if only that red lane score had been better...

Third were the Hot Rods on 508 laps. We know Daemon Hill were three laps up the road, but were they first or second? Daniel put us out of our misery - Daemon Hill were second on 511 laps and Von Ryan's Express were the winners, five laps to the good on 516. A close finish, with the top three teams separated by a little less than eight laps after an hour of racing.

Huge congratulations to Ryan, John, Sharon and Stephen. I'm not sure many would have backed them as winners at the start of the evening, but it was only Ryan who didn't have a WHO team race medal - and that was because he'd never raced at the Barn before! All four got extra prizes - a Le Mans sticker each, plus Ryan got a much admired Oreca Matmut Le Mans baseball cap. Nice loot...

A big thank you goes to everyone who came along and made it such an exciting and fun AFX Endurance evening at the Barn. Special thanks go to Daniel and Stephen who ran race control so well and to all those who came early to set up and stayed late to pack away.

The first AFX Endurance Championship points have been allocated, with the four Von Ryan's Express team members top of the table. There are three more races - two team races and one individual race - so they'll be plenty more twists and turns until the championship trophy and prizes are handed out in October.

Next up in the championship is the Easter team race on Wednesday 19 April. We'll be racing on an 88 foot version of the Circuit of the Americas. Yee-haw! 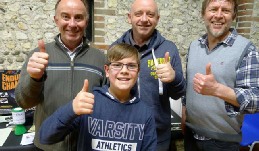 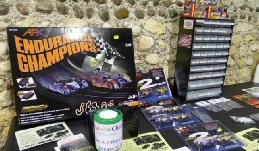 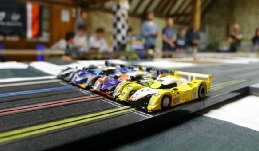 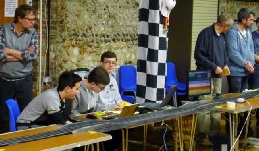 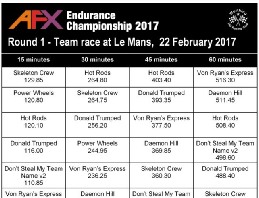 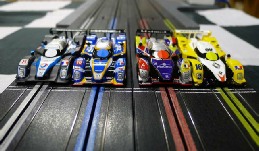 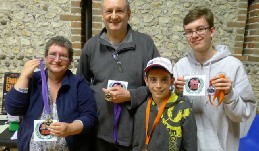 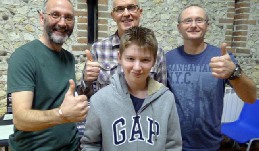 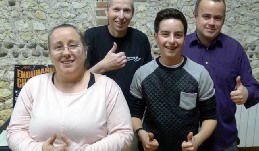 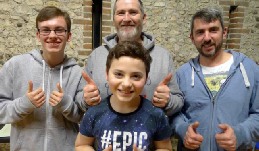 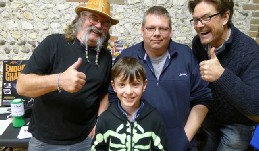 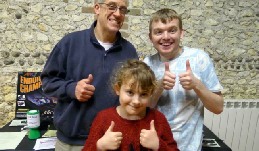 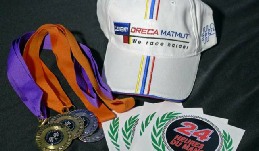 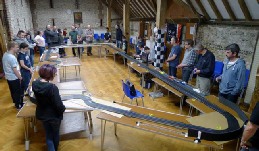 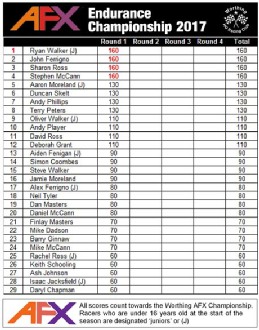