Fourteen racers took to the grid for our fourth and final AFX Endurance Championship team race of 2018. The championship was nicely poised with Matthew leading Simon by just twenty points. Daniel and Terry were not far behind and Oliver just needed to turn up to claim the junior title. And that's where the drama started...

At five to seven, there was no sign of Matthew and no Oliver. Our championship leader arrived on the stroke of seven a little flustered, but safely on the race sheet. Meanwhile, Daniel and Andy were scratching their heads trying to figure out how to allocate the teams. They were just as relieved as Oliver when he, Ryan and Steve walked through the door after a lengthy two-hour crawl along the seafront from Hove.

The teams were now much easier to put together - two teams of three and two with four, each with a racer making their WHO debuts. Andrew was very nearly the youngest WHO racer of 2018 - he teamed up with Ryan, Simon and Steve. Andrew's grandad Richard joined Daniel, Mike and Andy.

Four teams meant half an hour for each team on each lane and a total race time of two hours. After the late start, we cracked on with the action. Like last time, the red car looked quick. Oliver, Ash and Terry (aka O.A.T.) had the pleasure of racing in red lane first and laid down a pretty impressive marker of 337 laps. The blue Oreca Peugeot 908 looked back on song and the blue lane looked nice to drive, leaving Daniel, Richard and Mike to rack up 310 laps - fourth team member Andy, sat out this lane.

If the two middle lanes were nice to drive, yellow and white were more tricky. Our HO version of the Autódromo Hermanos Rodríguez - where the Mexican Grand Prix will take place this weekend - was quick and flowing, but had a couple of corners that could catch out the yellow or white lanes. White had to go careful on the inside of the hairpin at turn five and yellow often got loose round the inside of the loop at turn eight. The marshalls were busy at both.

Having said that, Jerome, Matthew and Peter (aka Triple HO's) did okay on white, scoring 302 laps. Ryan, Andrew and Simon (Steve did a run to KFC, so sat out) certainly struggled on yellow, but they hoped everyone else would too...

It was the turn of the race leaders to move to yellow for the second half hour. Oliver, Terry and Ash did well - finishing just two laps short of 300 laps. Andrew, Ryan and Steve (now with the team name 'KFC Trademark Ltd') had the misfortune of following yellow with white. They marginally improved to post a score of 276 laps, but that left them ninety-five laps behind the new leaders. Simon's championship chances were hanging by the flimsiest of flimsy threads.

The new leaders were Team Name Volume 3 - Daniel, Richard and Andy driving this time and Mike sitting out. They managed 334 laps, three laps short of O.A.T.'s score in red. Team Name vol.3 had now completed the best two lanes, surely they wouldn't hang on to a slender nine lap lead over the next hour? The Triple HO's had smashed the best score in blue with 329 laps, so things were looking good for them, sitting in third, just four laps behind O.A.T. in second.

This would be Andrew and Richard's final action of the evening as Andrew was expected home by nine. He certainly made the most of it, showing skill and determination to run smoothly in blue and finish the first ten minutes neck and neck with Ash in white. Richard battled valiantly in yellow, handing the controller over to Mike before saying his farewells. We hope to see them back for the AFX races next year.

Andrew's performance was the start of an impressive recovery by Team KFC - Simon and Steve consolidated on the youngster's good start to score 328 laps, clawing more than forty laps back on Team Name vol.3 as Richard, Mike and Andy managed 286 in yellow. Meanwhile, O.A.T. racked up a handy 310 laps in white, which put them in second place, 33 laps behind the Triple HO's going into the final segment. O.A.T. were looking forward to blue lane, Triple HO's more than a little nervous about yellow...

Ryan lead the KFC charge in red lane - surely there was no chance of a race win, but third certainly looked possible. Team Name vol.3 were in their sights. For the race win, O.A.T. knew they needed to gain eleven laps on the Triple HO's every ten minutes. When the margin was 20 laps at the first driver change, the pressure was suddenly all on Jerome, Matthew and Peter. Although Matthew suspected second was enough for the championship (if Simon's team didn't win), he wanted to win to make absolutely sure. It was a tense thirty minutes.

In the battle for third, Ryan and Steve had put KFC within striking distance of Team Race vol.3 with ten minutes to go. Andy dug in with the white car and Simon could only grab another ten laps with the rapid red car, leaving KFC eleven laps behind in the overall standings at the end. Simon had driven extremely hard - KFC's 358 laps was the highest segment score of the entire race. Team Race vol.3 had set the best score in white lane to defend their third place.

The duel for the win was over long before the final ten minutes. Terry brought the blue car home second in the segment with an impressive 352 laps - the second best segment score of the race. With the Triple HO's back on 296 laps, that gave a winning margin of twenty-three laps for Oliver, Ash and Terry - a great performance over all four lanes and top scores in blue and yellow.

Huge congratulations to O.A.T. for their win. The result also pushed Terry and Oliver into second and third in the final championship standings. However, it was Matthew who extended his championship-winning margin to forty points and took home an armful of AFX loot, together with his first WHO title. Oliver picked up the junior rookie title last year, but he was delighted to add the 2018 AFX junior crown and take home an AFX car.

A big thanks to all the thirty-three racers who have taken part in our second AFX Endurance Championship - it has been a lot of fun! AFX have kindly supported and publicised our races and provided prizes for our winners and champions.

There are a few changes to the AFX championship for next year - we'll have just three races, but they will be better publicised and all AFX racers will score bonus points towards the WHO club championship. We start it all again in the Easter holidays. 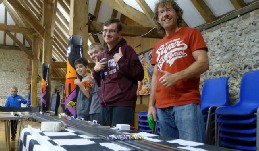 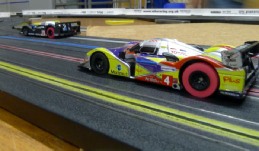 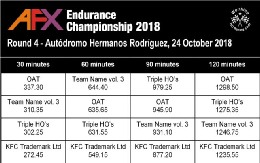 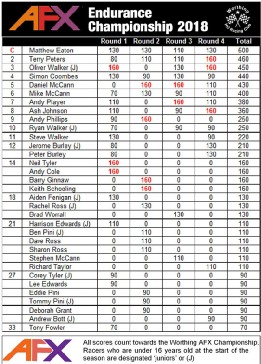 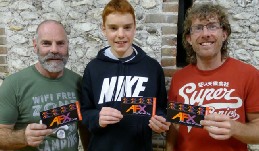 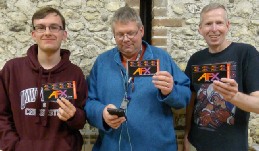 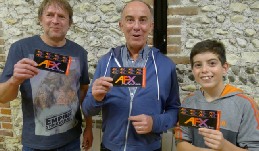 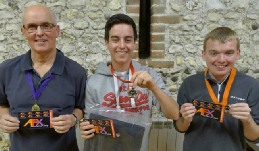 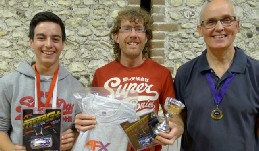