Our second AFX Endurance Championshipteam race of 2018 was a little low on numbers - fifteen racers - but full of excitement. With Andy unwell, everyone mucked in to set-up the track and run the evening - a very big thank you to everyone who ensured the race went ahead.

You can study the results by clicking on the tables to the right. All the pictures, tables and diagrams enlarge if you click on them. There are more pictures posted on Flickr, plus a video of the night’s action will appear on YouTube - click the buttons above.

The second round of our 2018 AFX Endurance Championship took place in the Whitsun half-term and featured a return to our version of the Le Mans layout which hosted the first AFX team race last year.

With Andy falling ill a few hours earlier, it needed a magnificent team effort to get the track built and the show on the road ready for practice at 6.30pm. Although we were a little low on numbers, three racers - Eddie, Tommy and Ben - made their WHO debuts. Tommy and Ben joined Rachel and Daniel to captain the four teams. Each team would race for 20 minutes on each of the four lanes, using the four AFX Mega-G+ club cars.

The secret to success in the AFX team races is to get the best out of each of the lanes - blue and red are usually the best and white and yellow more tricky. Everyone races the lanes and the same cars, so everyone faces the same challenges. The Dirty Rollers - Daniel, Barry, Andy Phillips and Keith - started in the favoured blue lane and they certainly hit the ground running, blasting out an impressive 197 laps. That gave them a huge 16 lap lead over Rachel's RRRR team that also featured Mike and Matthew. That didn't look a bad score for RRRR in white lane.

With two team members making their debuts, The Dragons Den - Tommy, Eddie, Deborah and Simon - had done well to score 180 laps in red. That just left Team Vipers in yellow, which certainly looked the trickiest of the four lanes. Ben, Terry, Sharon and Dave worked hard to get to just over 161 laps - how would that match up with the other teams' scores with the yellow car?

It was the turn of The Dragons Den to squeeze what they could out of yellow lane in the second 20 minutes. They came up five and a half laps short of Team Viper, with 156 laps. An excellent score of 184 for the Vipers in white put them up to third place and they had the two best lanes to come.

The Dirty Rollers had just completed the best two lanes, adding 191 laps in red to their 197 in blue. That gave them a huge advantage at half distance, but with the two 'gutter' lanes to come. However, it was Rachel, Mike and Matthew who won this segment - their 195 laps in blue putting them on schedule to challenge the Dirty Rollers by the end of the evening...

With the race leaders moving to the tricky yellow lane, it was time to see how the two previous scores in that lane matched up. The Dirty Rollers managed 163 laps, not much more than the other two. Rachel's RRRR took advantage and their score of 187 laps gave them the overall race lead.

It was the blue car that won the segment yet again. Ben, Terry, Sharon and Dave were working together brilliantly and set the highest score of the evening so far - Team Viper scoring 197.3 laps. The Dragons Den lost some momentum due to car troubles and scored just 167 laps in white.

Our team races usually run for an hour, but with just four teams on the grid tonight an extra five minutes was added to each lane. That meant the outcome of the race was down to the final twenty minutes. RRRR had a five lap lead over the Dirty Rollers, with Team Vipers just a further eight laps back. The Dragons Den seemed out of the running - but they were finishing in blue lane...

It was a sensational final session with all the teams at their best and pushing for the biggest scores they could get. RRRR had the most difficult job, racing in yellow lane, but Rachel, Mike and Matthew ended up ten laps ahead of the previous best in that lane - finishing with 173.5 laps to give them a total of 740 overall. Would it be enough?

The Dirty Rollers had a five lap gap to overturn and they managed that comfortably, setting the highest score in white - an extremely impressive 196 laps which would be the fourth highest score by any team on any lane. They had been 100% focused on winning the race and did so by seven laps.

Almost as impressive were Team Vipers. Their 193.5 laps was the highest score of all the teams on red lane and pulled them up to just three and a bit laps behind RRRR - a great performance over the four lanes.

Despite finishing fourth overall, The Dragons Den could be extremely proud of the their final twenty minutes - scoring a massive 205.8 laps in blue lane, winning the segment and setting by far the highest score of the evening - the only team to break 200 laps. It was a steep learning curve for Tommy and Eddie, but they certainly were on top form by the end.

At the end of a busy and exciting evening, it was congratulations to our winners, the Dirty Rollers - Daniel, Barry, Andy and Keith. Huge thanks go to the set-up and tear-down teams and to Daniel who took charge of race control. Tonight's results put Matthew top of the AFX championship table at the halfway point. We're back for the final two races in August and October. 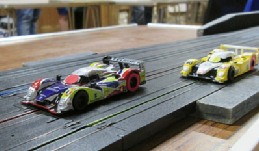 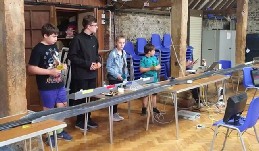 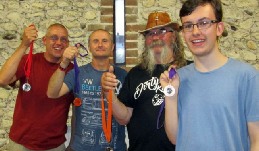 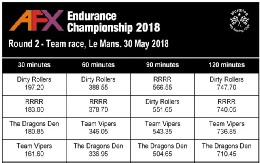 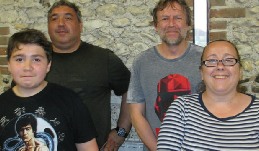 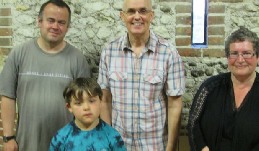 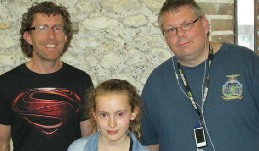 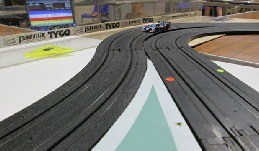 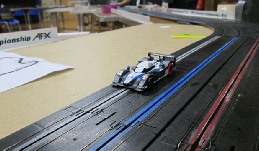