Our second AFX Endurance Championship race of 2019 took place in the summer holidays. Twenty-two drivers took part and gave us another nail-biting finish.

You can study the results by clicking on the tables to the right. All the pictures, tables and diagrams enlarge if you click on them. A video of the night’s action is on YouTube - click the button above. The AFX button takes you to the 2019 AFX championship page.

We returned to our AFX version of the old Silverstone circuit for the second round of the 2019 Worthing AFX Endurance Championship. Twenty-two racers included seven making their WHO debuts and four racing at the Barn for only the second time. It was also great to welcome Andy back for his first race of 2019.

However, there were only eighteen at 7 o'clock. These were divided into six teams of three, with Al, Gillian, Max and Simon making up a rather inexperienced team of four to slot nicely into the second group of teams. As usual, all the captains were juniors and young adults - although Ash was the only captain aged over-16 this time. Each driver would race for five minutes and swap over at the bell. The one team of four would have three drivers on each lane, one driver sitting out each time. With strategy discussed and team names decided on, it was time to race...

Team One, Slow Silvers and Panda Panja Roon were the three team to race in the first heat. By far the most youthful team on the grid, Panda Panja Roon set the best score - Dylan, Kalina and Gareth did a fabulous job in red lane. Their score of 152 laps was beaten by The Tigers, who had red in the second heat - Mateusz, Matthew and Andy Player scoring 161. Those were our top two after fifteen minutes. In third were Team Fancy Pants, the quartet of complete novices surprising everyone with an excellent 150 laps in blue lane. With no experienced drivers in their team, they were at a big disadvantage, but certainly made a flying start.

The other four teams all shared the 'gutter' lanes of white and yellow - these lanes are always on the inside or outside and the trickiest to race in. The overall race result is often decided by who does well in white and yellow. It was Detroit 74 who were the best in this first race - a score of 148 laps in white looking a very handy score indeed. Slow Silvers raced in yellow, scoring 141 but losing laps when a pick-up shoe needed replacing. Team Progress were two laps back in sixth after a solid run in yellow. Team One struggled in white and were in last place, a further three laps adrift.

The first lane change would give us some idea of the direction the race was heading. Team One recovered sensationally from their poor first stint - Ash, Alex and Terry scoring an impressive 163 laps in blue lane. That would push them from last place up to third. The other two teams in that first group has a rough time in the gutter lanes. Slow Silvers managed 139 laps in white - but that left Alex, Deborah and Alan in fourth place overall, the worst two lanes finished with and the best still to come. Like most of the teams, Dylan, Kalina and Gareth did not enjoy yellow lane much - their 122 laps dropped them to sixth place.

The second group's scores were also a mixed bunch. The Tigers did better than most in yellow, their score of 143 laps ended up as the best in that lane all night, with captain Mateusz driving particularly well. However, Detroit 74 surged into the overall lead with a mammoth 168 laps in blue - Harry, Keith and Andy Phillips were superb. Team Progress - Szymon, Simon and John - had another solid gutter-lane run, this time with 136 laps in white. They now just had red and blue lane to enjoy. Team Smarty Pants' brilliant start faltered a little with 118 on red. That dropped them to the back, six laps behind Panda Panja Roon at the halfway point of the race. Team Progress were fifth, Slow Silvers fourth, Team One third, The Tigers second and Detroit 74 in the lead by twelve laps.

Team One and Slow Silvers made the most of the middle lanes in the penultimate 15 minutes. Team One's 155 laps put them up to second overall - a great recovery from last place after the first lane. Slow Silver's excellent score of 167 laps in blue kept them in fourth, but they remained in with a shout with red lane still to come. Panda Panja Roon had a good run on white, Gareth coaching his younger team mates to a very solid 130 laps on the tricky inside lane.

Detroit 74 were full of confidence and they knocked out another fabulous score of 167 laps to stretch their lead at the top. They would be finishing on yellow, so there were no premature celebrations - Keith made sure his team mates kept their feet firmly on the ground. Team Progress were true to their name and maintained their forward momentum with 164 laps on blue and red lane to finish on. The Tigers were all very happy with 146 laps on white. It might have dropped them to third overall, but they were gearing up for a fun finale on blue. After 118 in red, Team Fancy Pants' 114 laps in yellow was pretty impressive for the first-time AFX racers - those gutters ain't easy. They stayed seventh, but were enjoying themselves.

The mark of a good AFX team race is when no-one is brave enough to predict what's going to happen in the final 15 minutes. Even with a 29 laps lead, Detroit 74 knew they were in battle with at least three, possibly four other teams. Team One dropped out of the equation with 130 in yellow - certainly not a bad score, but not enough. Slow Silvers put down the score to beat from the first group - their 149 in red meant a total of 597 laps would be the target. That would probably not be enough, but anything could happen. Panda Panja Roon finished on a high with 154 in blue - they had done really well for such a young team.

The race result was all down to the final group. Team Fancy Pants did their best in white, but all three drivers found it hard going. They will have learned plenty for next time and should be happy with their scores, especially the excellent 150 laps in race one. Detroit 74 would have been delighted with such a score on yellow, but they knew from the start they wouldn't get near it. The Tigers in blue cut the deficit to the leaders by 16 laps in the first five minutes and another 13 laps in the second five - that left them just four laps behind overall. Team Progress had also cut into the lead - they started 45 laps back, but reduced the deficit to 27 laps with five minutes to go. It was going to be tense!

Detroit 74 had the perfect driver in Keith to try and defend their lead on the final leg - he certainly looked serious when he took over from team captain Harry. The Tigers had Mateusz - complete with awesome tiger face paint - to try to grab a famous victory. John was on final stint duty for Team Progress, ready to take advantage of any mishaps and aiming to get past the Slow Silver's score of 597 laps. Mateusz drove superbly, but Keith was not going to let the race win slip away. Mateusz had shaved another two laps off the lead with just thirty seconds remaining, he passed Keith again before the end, but time ran out - Keith had held out and Detroit 74 finished an hour of racing just 1.95 laps ahead of The Tigers. In the final seconds, John did just enough for Team Progress to pass the Slow Silvers for third - by just 2.45 laps.

Congratulations to Harry, Keith and Andy on a very exciting victory. Harry was particularly delighted to win on his first visit to the Barn, but his team mates were pretty chuffed too - WHO winners medals are always well-earned and hard to come by. Well done to all the other teams who all drove brilliantly and showed excellent teamwork to give us such an exciting race from start to finish. In addition to the winners medals for Detroit 74, everyone went home with AFX stickers and the captains of the top three teams now have their own WHO t-shirts.

A big thank you to everyone who came along, to the set-up team, Ash's excellent work on race control and to those who stayed behind to pack away. AFX kindly supported the championship back in 2017 with cars, banners, stickers and prizes and we really appreciate the generosity of Steve and everyone at AFX HQ in Nevada. The third and final race of this year's AFX championship is our traditional Halloween team race in October half term. Hope to see you there. 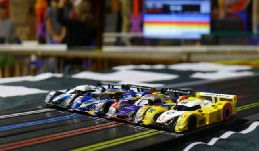 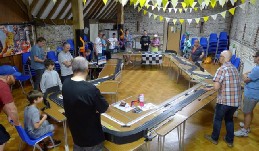 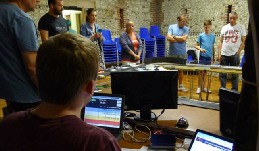 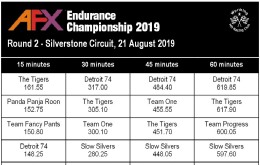 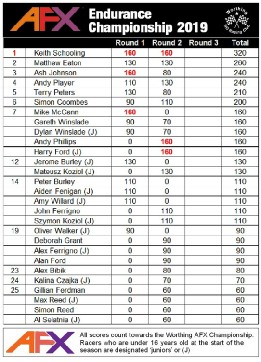 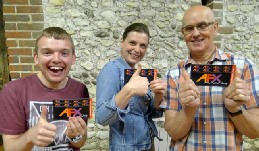 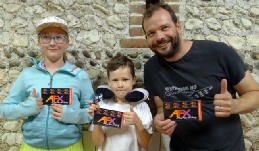 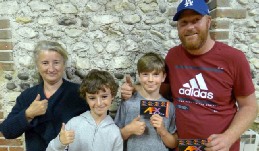 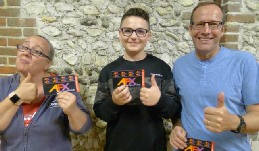 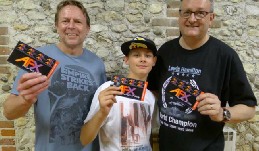 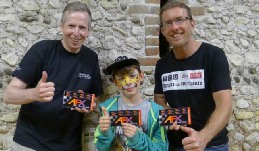 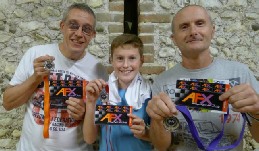 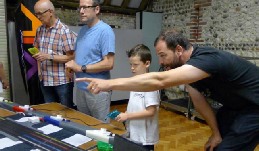