Our third AFX Endurance Championship team race of the year saw a typical mid-August attendance of eleven - a select bunch of mostly AFX regulars, plus Brad who was making his AFX debut. Three teams of three and one pair meant that the total race time would be two hours and each team would spend thirty minutes on each lane.

Oliver and Ryan captained the first two teams. Stephen and Daniel, both nineteen, volunteered their services to captain the other two teams as the youngest of our 'jadults'. That meant Ash could put his feet up after trekking halfway across the country at the weekend.

In fact, no-one got to put their feet up - all hands were needed to drive, marshal, cover race control and take the occasional official picture and video clip. The Shanghai-inspired track certainly had a lot of corners - some slow, some excitingly quick - and each lane had its challenges. Driving for ten minutes at a time would take full concentration.

After practice, seeded drivers were matched with captains - Ryan paired with Mike, Oliver with Simon, Stephen with Terry and Daniel with Andy. The remaining three racers and the imaginary Mr Zero were then randomly allocated. Ash joined Ryan and Mike, Brad teamed up with Oliver and Simon, Matthew with Stephen and Terry. Daniel drew Mr Zero, leaving him and Andy the team of two.

The middle lanes - red and blue - usually provide the big scores in these races. Shanghai was no exception. Stephen's 'Beep, Beep, Beep' were first in red lane and they had a fabulous 30-minute battle with Daniel and Andy 'Featuring Mr Zero' in blue. After the first stint, blue had a slender lead over red, but the very quick (but difficult to stop) red Matmut Oreca car gradually pulled away, Matthew finishing the final stint five laps ahead of Andy.

Behind them, it was a close race in the gutter lanes between Ryan's team - 'No Team Name Yet, But We'll Think Of One By The End Of The Night' or NTNY-BWTOOBTEOTN or simply 'No Team Name Yet' or NTNY - in white lane and Oliver, Simon and Brad -  B.O.S. - in yellow. Ryan and Oliver took the first stint and were separated by less than four seconds after ten minutes of racing. By the end, Mike and Ash had added a comfortable fifteen lap margin - although they were thirty laps behind the leaders.

With such gaps between the middle and gutter lanes, the outcome of the race would only become clear in the final stages of the two hours. Race leaders 'Beep, Beep, Beep' moved to the un-fancied yellow lane. Racers were finding the end of the long straight tricky in yellow and it certainly needed perfect timing to get round in one piece. Daniel and Andy (Featuring Mr Zero) moved to red, Daniel having twenty minutes with the fast car. After five minutes, Daniel was two laps up on Ryan in blue, Brad was three further laps back in white and Terry was hanging on, just a lap back in yellow.

Andy took over with a seven lap lead and would pull further away from Ash in blue. Simon put in a great ten minutes in white, holding the gap to blue and pulling out eight laps to Matthew in yellow. At the end of the stint, Daniel had delivered a crushing blow to his rivals - ending 28 laps up and going seventeen laps better than the previous score in red. Oliver squeezed the best out of white, finishing a decent sixteen laps behind his brother's team NTNY. The gap back to the Beeps in yellow was twelve laps - Stephen putting in a good final ten minutes and their solid team performance eclipsed B.O.S.'s score in yellow by nine laps.

Daniel and Andy had done well in the middle lanes, but they'd finish with both gutter lanes. Their lead over 'Beep, Beep, Beep' was fifty laps, but would that be enough? B.O.S. who had blue and red to come were eighty laps behind - it seemed a lot, but they were certainly not out of contention...

The race leaders were immediately faced with the challenge of yellow lane. Ryan's NTNY and Oliver's B.O.S. were in red and blue - and those were the two cars that battled for the lead, the team captains at the wheel. Ryan handed over to Mike with a four lap lead, Simon taking over from Oliver. Andy was six laps back, handing over the yellow car to Daniel. Matthew handed the white car to Stephen two laps behind.

Simon drove brilliantly and moved to the front, Mike finding the red car difficult to stop for the slow corners. At the final change-over, Brad started with a six lap lead over Ash and Terry was twelve laps back in white, two laps ahead of Andy. It was a cracking final ten minutes. Brad and Ash fought hard at the front. The B.O.S. team had done a great job wringing every last ounce of power out of the blue car - which is not as quick as it was last year. On the other hand, the red car is loosening up with age, but that does make it difficult to slow down...

Behind them, Terry battled hard to fight off a charging Andy, who was definitely getting the most out of yellow. At the end of the segment, the form book had been turned upside down - blue beat red by two laps and yellow beat white by three. The gap between second and third was sixteen laps.

After a great run on blue lane, B.O.S. were on a charge from the start in red. Brad had them fourteen laps ahead of 'Beep, Beep, Beep' after ten minutes and Simon stretched the lead to twenty four after twenty minutes. That put B.O.S. up into second place overall with ten minutes still to go - but were they still in with a chance of the win? Daniel was taking the lion's share of white lane for 'Featuring Mr Zero'. He kept within four laps of blue at the end of the first stint and Andy halved that gap in his ten minute run. That made the gap to B.O.S. a mere twenty-six laps. B.O.S. has started the segment sixty-eight laps behind. Overturning forty-two laps in ten minutes seemed unlikely.

With Daniel back on track with the white car, 'Featuring Mr Zero' struck trouble. The car stopped dead at the end of the long straight. It did it three laps in a row. Nothing obvious seemed wrong with the car. Would the spare chassis be needed? Marshals had a quick look at the track, just in case - and there was a track break. The white car was going again - Daniel and Andy were much relieved!

Stephen was going great guns in blue, but Oliver managed to extend B.O.S.'s lead by another couple of laps - giving them the highest stint score of the whole race. Daniel and Andy finished six laps back in third, with NTNY finishing twenty-seven laps back after a tough half hour in yellow lane.

With the final numbers crunched, Daniel and Andy were confirmed the race winners by just over thirty laps - a gap based entirely on better gutter lane performances. Leaping from last place to second were B.O.S. - who had finished so strongly in the middle lanes. Stephen, Terry and Matthew finished a further twelve laps behind in third, with NTNY fourth and another sixteen laps back.

Congratulations to our winners and a big thanks to all tonight's racers for contributing to a memorable endurance race. The results leave Matthew and Simon separated by just twenty points at the top of the AFX championship table going into the fourth and final round in October. After two wins in two races, Daniel is not far behind. 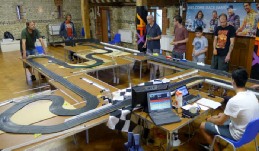 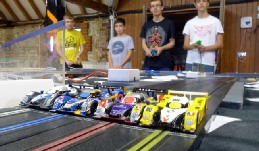 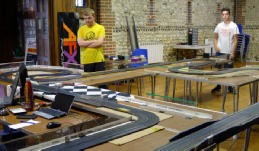 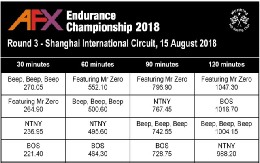 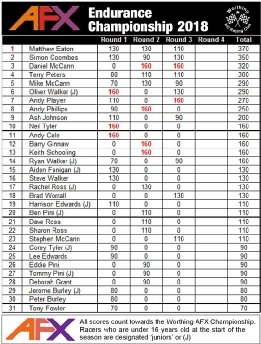 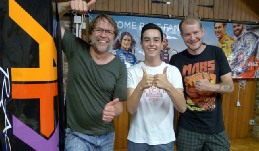 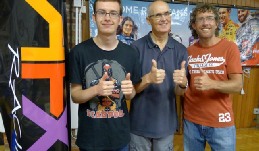 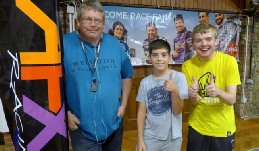 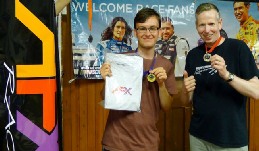 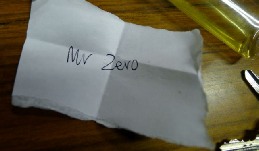