Wow! What a great turnout and what an exciting evening at the Barn, racing on the fast Fuji International Speedway layout. A fabulous 32 racers this time, which meant we switched from the planned individual sprint race to a team race with eight teams of four racers each.

Our August school holiday race is quite often a cosy get-together, with most people off on holiday or doing outdoor stuff in the fine weather. That's why we schedule the one individual sprint race into the mostly team-oriented endurance championship...

However, at 7pm and with the thirty-second racer just through the door, a decision was made to switch to a team race - otherwise we'd still be working our way through the finals at midnight!  The attendance of 32 beat the best of 2017 so far, and that was 28 at the first AFX Endurance Championship race back in February.

Nine racers were making their AFX debuts, including Andrew, Lucie and Oscar who have been waiting patiently for the East and West Sussex school holidays to coincide (the AFX races being in the West Sussex holidays and them living in the East). We also welcomed Caleb, Marcus, Aaron, Ellie and James for their first ever WHO races at the Barn.

One of our top junior racers captained each of the eight teams, the other members randomly selected from three pools - top racers in last year's endurance championship, regular WHO racers and rookies. With teams selected and team names decided upon, we were off racing. The track for the evening was a fast and flowing layout based on the Fuji International Raceway in Japan. Tomy, the parent company of AFX, is from Japan, so the choice of circuit seemed just right - after Le Mans in February and the Circuit of the Americas for the Easter race.

The AFX Le Mans prototype Peugeot body shells look absolutely stunning and the AFX Mega-G+ underneath are perfect for our endurance championship. The four cars would run almost non-stop for just over two hours, taking plenty of punishment and still running fast and smooth at the end. The only maintenance was a tyre clean and a shoe polish between each sixteen minute race.

Blue lane was driving beautifully and Oliver's team of Simon, Ash and James (aka "Bullet") topped the leaderboard after the first sixteen minutes - each team member driving for four minutes each, with slick in-race driver changes keeping the momentum going. First to enjoy blue lane in the second group of teams were Rachel's "Slimers" - they were just two laps behind Bullet in second place. A few feet further back were "Rocket! Rocket!" who'd done very well in white lane. We had a few technical hiccups with the yellow lane, car and controller. These were sorted out, but we needed to adjust the scores of "Chrono Accelerated" and "Squirrels, Squirrels & more Squirrels" so not to penalise either team for circumstances beyond their control. Even so, they were at the back of the field.

As always, the pace increased a few notches in the second stint of the race, as drivers got more comfortable with the cars and track, identifying the corners to go cautiously through and other places were they could go a bit quicker. Blue and white continued to be the favourite lanes and delivered the highest scores. Rocket! Rocket! put in an enormous 175.95 laps in blue, which would not be bettered all night - Ryan, Andrew, Andy Phillips and Dave were driving superbly and jumped into the race lead. Behind them, with 169 laps in blue where Corey and his team "Gun". Slimers slipped to third, although their score in red lane had been better than their opening score on blue. Fourth were Bullet, followed by Oscar's Squirrels, Marvellous Marcus, Chrono Accelerated and Aiden's "No team name".

With the best lane (blue) and the most tricky lane (yellow) being, on average, around fifty laps apart over sixteen minutes, it would be difficult to see how exactly the race was panning out. Teams with yellow lane yet to do knew they'd need a good gap on their pursuers to say ahead. And for those with yellow lane already in the bag, the only way was up. Our top two teams, Rocket! Rocket! and Gun, were in red lane this time and then finishing on yellow. With the pressure on, both of them absolutely blitzed red, finishing just behind their rivals in blue - that was Chrono Accelerated and Squirrels etc.

Undoubtedly the top performance of this sixteen minute section was Slimers' superb 134.55 laps in yellow - the top score of the race in the tricky lane - and that kept Rachel, John, Mike and Aaron in third place overall. Squirrels and Chrono had moved up to fourth and fifth, with Marvellous Marcus still in sixth after a good solid score in white lane for Marcus, Andy Player, Deborah and Sharon. Bullet were now in seventh, just ahead of No team name. As expected, the gaps were starting to close up and no-one was quite sure what the final result would be...

The mood most definitely changed in the final half hour of racing. There'd been a buzz of excitement all night amongst the thirty-two racers, but even the one non-racing spectator - Oliver and Ryan's mum - sensed the tension in the room as the clock ticked down towards the finish. The top two both had yellow to reckon with, and the rest of the field would put them under immense pressure.

In the first group of teams, Gun put in a very respectable 125 laps in yellow, easily enough for Corey, Neil, Matthew and Caleb to finish top of their group, ten laps ahead of Chrono Accelerated - Alex, Duncan, Terry and Ellie being one of the teams to suffere first thing in yellow. Ten laps behind the Chronos, the final two teams in the first group finished less than a lap apart after completing all four lanes. It was Aiden, Tony, Daniel and Lucie (aka No team name) who just overhauled our early leaders, Bullet. Where would they finish overall? We'd find out after the final group of four teams had their last turn on track...

Rocket! Rocket! now had the advantage of knowing what they needed to do - to get 112 laps in yellow lane to beat Gun and finish no more than fifty laps behind Slimers. Ryan, Andy and Dave handled the pressure and handed over to Andrew with the winning target in sight. Andrew didn't relax until he'd passed 112 laps - and that wasn't until well into the final minute. The team ended on 118 laps - giving an overall total of 618 laps and a margin of just under seven ahead of Gun. Slimers just couldn't push on for the score they needed, but the ended up an excellent third - ten laps behind the winners and just three laps back from second. Those three teams were certainly the pick of the bunch tonight.

A small gap of seven laps separated Slimers in third with the chasing pack - fourth to eight covered by a mere ten laps. The gap between fourth and fifth - Chrono Accelerated and Squirrels, Squirrels & more Squirrels - was a miniscule 1/20 of a lap or just less than a metre. Marvellous Marcus continued with their perfectly consistent scores, finishing sixth on 599.6 laps, less than two laps away from the two teams in front. That meant the close finish between No team name and Bullet was for seventh and eighth place, Bullet having tumbled from first after sixteen minutes to last place after sixty-four.

Huge congratulations to Ryan, Andrew, Andy and Dave on their race win. That left both Ryan and Andrew with 100% win records in the AFX Endurance Championship, Ryan having three wins out of three and a very commanding championship lead. Indeed, he only needs to turn up to the final round to pick up the trophy. Andrew must have been pretty chuffed to win on his AFX debut, although frustrated about the out-of-synch school holidays. Both Andy and Dave picked up their first WHO HO medals, so a memorable night for them too.

Big thanks to everyone who came along and made it a very special night at the Barn. Top marks go to Stephen and Daniel who ran race control perfectly, keeping the race rolling along at a good tempo and for keeping the excitement buzzing - it's not an easy job. We are ever grateful to all those who turn up early to set up and stay late to pack away - we wouldn't be able to build and race on such big tracks without you. 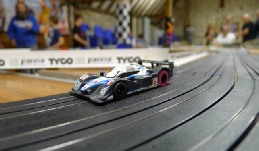 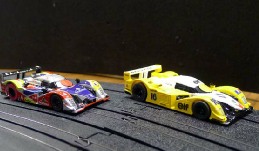 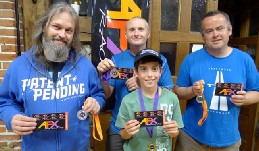 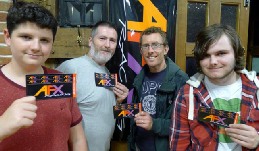 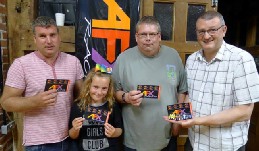 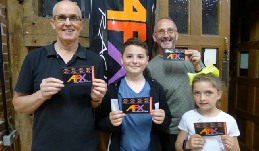 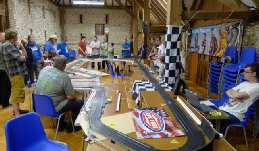 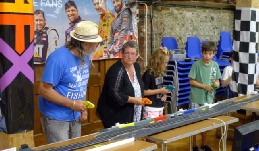 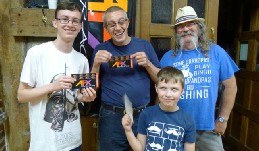 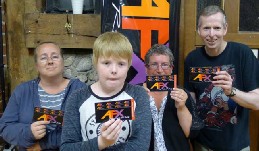 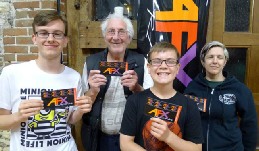 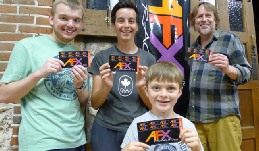 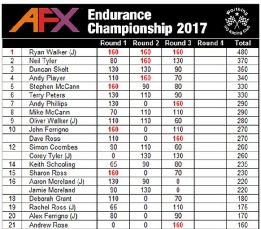 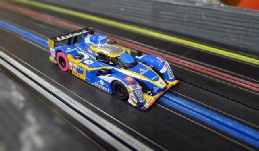 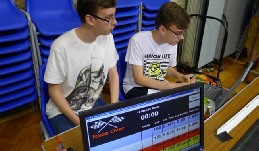