It was another excellent evening of AFX endurance racing at the Barn. Fourteen racers were divided up into four teams for a full two-hour race on our replica of the Sebring International Raceway. Amy and Dylan joined us for their first taste of racing at the Barn - six-year-old Dylan comfortably the youngest WHO racer of 2019 so far.

The two four-person teams contained our rookie racers and they would start on the easier middle lanes - each driver racing for seven and a half minutes. Dylan had the exciting experience of starting for Team Flash and soon got into perfect rhythm, moving up from fourth to second before handing over to his dad. Amy drove the third stint for Team Team, keeping them in the lead. Team Flash had some problems with the blue car, requiring a switch to the spare. Despite the delay, Simon and Oliver managed to haul themselves back into contention, Oliver overtaking Peter with just two minutes to go. Team Flash won the first segment, finishing two laps ahead.

Behind the top two, the Air Sparrows - Ash, Keith and Mike - did a solid job in yellow. Driving for seven and a half minutes each, Ash did the fourth stint on this lane to finish just twelve laps behind the leaders. That left white lane, which looked to be the trickiest. 'Hold on to First' had some work to do to live up to their team name, Jerome, Terry and Matthew ended thirty laps off the lead.

Hold on to First were delighted to move on to blue lane for the second thirty minutes. We stuck with the spare car that was running so well. Terry did two stints and with support from Jerome and Matthew racked up an impressive 259 laps to go second overall. Team Flash were seven laps short in red - an excellent score that gave them a race lead of twenty four laps at the one hour mark. However, they did have the two outside 'gutter' lanes to come.

In those gutter lanes this time were the Air Sparrows and Team Team. Aiden, Andy, Amy and Peter battled hard to reach 213 laps in yellow lane - that dropped them a place to third overall. The Air Sparrows weren't far behind in white, their 205 laps - Mike doing the double stint - would prove the best score on that lane. It left them dead last and sixty laps off the lead, but with the two middle lanes to come they were ready to press on.

And press on they did. Air Sparrows monstered blue lane with the highest score of the evening so far - 273 laps. Keith had been relentless in his fifteen minutes, reeling off lap after lap without error. Hold on to First managed to leapfrog Team Flash to take top spot overall - Matthew leading a great team performance in red lane. It would have been better, but a pick-up shoe came loose with 3 minutes to go. Simon's slick pit-work had the Matmut Oreca Peugeot back on track very quickly. An excellent half hour on yellow lane allowed Team Flash to hold on to second place in the race, twelve laps behind Hold on to First and five laps ahead of the Air Sparrows. Team Team were fifty-five laps behind Team Flash after enduring white lane and clocking up a decent score of 203 laps.

We tweaked the format slightly in the fourth and final segment - the four-member teams carrying on as before, but the three-driver teams switched to ten minute stints. That way, every driver had an equal share of the race. Oliver on race control ensured everything ran like clockwork. A hush descended on the Barn for the start lights, as everyone knew the race would be decided in the next thirty minutes.

Team Flash were realistically looking at defending third place - they would need a great performance in white and Team Team had a gap of fifty five laps to gain in blue lane. The battle for the win would most likely be between Air Sparrows in red and Hold on to First in yellow. Hold on to First would need a super-human effort to, you know, hold on to first. The gap was just seventeen laps at the start.

It was an intense half hour - all four teams and all fourteen drivers racing their best laps of the night. At half way, Air Sparrows led the way in red, twelve laps up on Team Team in blue and twenty-four laps ahead of Hold on to First in third. Team Team had a twenty-nine lap advantage over Team Flash. The battle for the race win was looking good for the Air Sparrows, but the battle for third was still very much in the balance. And there was still fifteen minutes to race.

Simon and Oliver would defend those precious twenty-six laps for Team Flash - and it was up to Amy and Peter to reel them in. After Amy and Simon's stints, the gap on the road was 43 laps - the margin overall down to just twelve. Oliver battled hard, but could not hold off Peter's charge in blue - the Team Team team effort gave them a score in of 264 laps which was the third best of the evening - only beaten by the Air Sparrows' scores on red and blue. That gave Team Team third place by just over six laps.

The Air Sparrows scored a huge 276 laps in red - the top score of the night. Despite a very strong 232 laps in yellow by Jerome, Terry and Matthew, the Air Sparrows beat them by twenty-seven laps overall. Hold on to First were blown away by those massive scores on the middle lanes where Keith, Ash and Mike were simply the best. Huge congrats to the Air Sparrows, who took home AFX winners medals, Easter eggs and AFX stickers - plus fifty bonus points each for the WHO club championship.

Many thanks to everyone who took part, including Deborah who helped with the marshalling. Special thanks go to the set-up team, the race control duo and to all those who stayed behind to pack up. Thanks also to AFX Racemasters who support these races, providing stickers for all the racers and end-of-season prizes. The next AFX event is the summer holiday team race in August - we'll be racing on the WHO Le Mans layout. 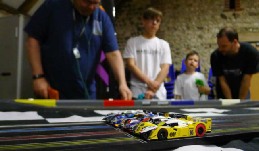 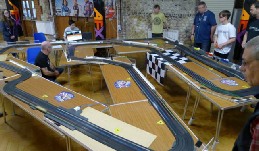 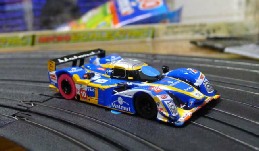 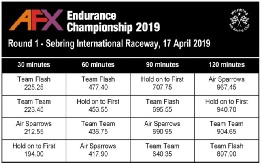 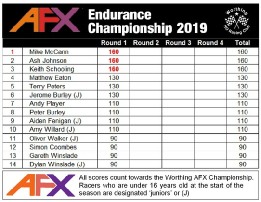 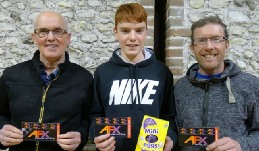 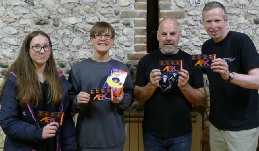 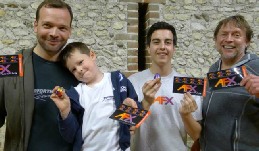 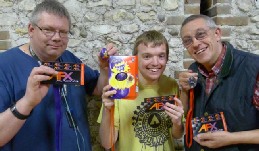 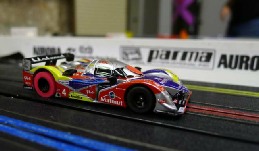 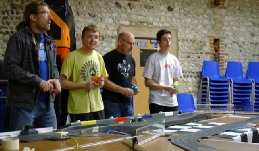