You can study the results by clicking on the tables to the right. All the pictures, tables and diagrams enlarge if you click on them. Plus there are loads more pictures on Flickr and a video of the night’s action is on YouTube - click the buttons above.

The opening round of our AFX Endurance Championship moved from the traditional February half term date to April, thanks to a particularly early Easter this year. We welcomed nineteen racers to the Barn, plus Mark and his family who popped in to see what WHO Racing is all about.

The nineteen were divided up into six teams (five of three and one team of four), each team captained by a junior racer and each having a 'seeded' driver - the highest-ranked grown-ups from the 2017 AFX championship. It looked like there would be some good teamwork tonight - the six team names were all decided in super-quick time.

The track layout was inspired by the Spa-Francorchamps track in Belgium, famous for its Grand Prix and the annual six-hour endurance race. It was a fast track, with some high-speed esses and three corners where drivers needed to be very careful - the La Source hairpin, the chicane and the Bruxelles loop. The practice session was with Micro Scalextric cars, the AFX race cars being kept fresh for 7 o'clock. That meant the first 15 minute run would be a bit of a test session to see how the AFX Mega-G+ cars would handle the track.

Ryan, last year's AFX champion, drew the short straw by going first in the tricky inside white lane. Ryan, Mike & Tony - the Munch Bunch - managed 90 laps, which was twelve laps back from Corey, Andy Phillips and Lee - aka Haven't a Clue - in yellow. But the top scorers of the first trio of teams were the AFX Demons - Jerome, Terry and Peter - who'd scored just under 115 laps in red. How would those scores match up to the second group?

Oliver's Army (Mark Two) - Oliver, Neil and Andy Cole - certainly confirmed that white lane was tricky. They did manage four more laps than the Munch Bunch. Aiden, Simon, Steve and Matthew - Aiden's Angels - beat Haven't a Clue by two laps in yellow. Ash, Harrison and Andy Player (A-ha) scored just under 118 laps to top the table at the end of fifteen minutes. With the differences between the lanes, it looked like all six teams were on a pretty similar pace - we could be in for a very close race...

The blue car joined the fray for the second fifteen minutes and it looked quick in the hands of the two teams who'd struggled with white lane in the first segment. The Munch Bunch put in a decent score of 113 laps, but Oliver's Army blew everyone away with a massive 124 laps in the second group. That was only enough to put them third, with A-ha retaining the lead after a solid 109 in yellow. The AFX Demons held on to second, having put in just under 108 laps, also in yellow. They both had white lane in the next round, so Oliver, Neil and Andy C were sitting pretty.

However, Haven't a Clue and Aiden's Angels did rather well in white - both scoring over 100 laps. That set them up nicely to finish in blue and red, although they had over 20 laps to make up on the leaders...

This time, it was the turn of the yellow car to take a well-deserved break. On track, the red and blue Oreca Matmut cars lined up against the works Peugeot in the white lane. In that white lane, the AFX Demons really struggled, falling just short of 90 laps. Also in white, Harrison, Ash and Andy P just broke the 100-lap barrier, but that meant they dropped off top spot. Oliver, Neil and Andy C smashed their way into the lead with another huge score - this time 127 laps in red lane.

Munch Bunch also scored well in red - 121 laps moving them off the foot of the table and up to fourth. Three laps ahead of Ryan's trio and just two laps behind A-ha were Aiden's Angels. Their 121 laps in blue had dragged them up into third. Back in fifth, but only three laps behind the Munch Bunch were Haven't a Clue. Going into the final fifteen minutes, there was everything to play for, but Oliver's Army had a very handy 17 lap lead to defend in yellow lane - although their closest rivals would be racing them for the win in the favoured red and blue lanes.

The top three were running in the second group, but the others were keen to do as well as possible and hope that nerves would get the better of the racers who came after them. Haven't a Clue in red and AFX Demons in blue were locked together for the first ten minutes, racing hard and pacing each other to big scores. In the end, AFX Demons finished on a huge 130 laps - the best score of the night so far. However, Haven't a Clue were just two laps back and that meant they were leaders overall - 446 laps the target to beat. Munch Bunch finished as they started - struggling in a gutter lane, this time yellow.

The race win was all down to the last fifteen minutes on track. Oliver's Army had to go patiently in yellow, look after the car and ensure A-ha stayed within 17 laps and Aiden's Angels didn't get more than 19 laps ahead. It was Aiden himself who took responsibility for the first five minutes and put his team two laps ahead of Ash and six laps ahead of Andy C. That wasn't enough to be on schedule for the win, but had put his team level with A-ha for second.

Aiden handed over to Simon, Andy to Oliver and Ash passed the blue controller to Harrison. Simon put in a great stint, stretching his team's lead over A-ha to seven laps - and ten laps over Oliver's Army. It looked like Oliver had done enough to defend his team's lead, but a lot could still happen in the final five minutes...

Neil had the job of bringing the yellow car home. Up against him were Matthew - who was pushing hard to get those extra nine laps for the win - and Andy P, who wanted to grab that second place back. Neil drove smoothly, keeping an eye on Matthew and realising he didn't need to push too hard. Nonetheless, the pace was breathtaking. Matthew never gave up, but also had half an eye on Andy who was the only driver making up any ground. When the chequered flag fell, there was a three and a half lap gap between Matthew and Andy, plus an eight and a half lap gap between Matthew and Neil. That gave Oliver's Army the race win by almost exactly ten laps and Aiden's Angels the runner-up spot by two laps. Haven't a Clue were fourth, AFX Demons fifth and Munch Bunch sixth.

The pace of that final stint needs to be put into perspective. Aiden's Angels set the highest score of the night - 131.65 laps. The highest score in yellow had been 109 laps (A-ha), which wouldn't have been enough to win - yet Oliver's Army smashed that previous best by 14, finishing on 123 laps. A-ha's score of 127.90 on blue was not shoddy either.

After that full-on final fifteen minutes, it was all smiles. The traditional post-race team photos were taken and then Oliver, Neil and Andy were presented with their prizes. Huge congratulations to our winners and a big thanks to everyone who took part. Special thanks goes to the set-up and tear-down teams; to Harrison and Terry who had their first tastes of race control responsibilities; and to Steve and the AFX crew for supporting the championship and sending us prizes, cars and the excellent AFX stickers that everyone went home with.

We are back for our second AFX round of 2018 - a first ever Whitsun half term team race - on Wednesday 30 May. 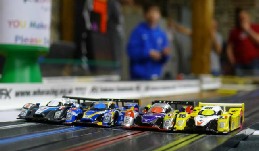 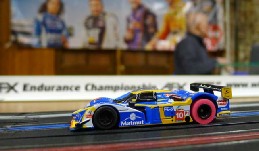 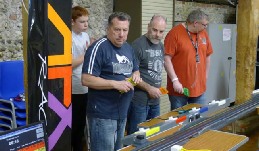 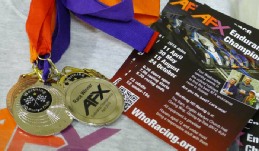 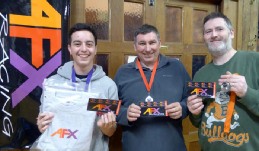 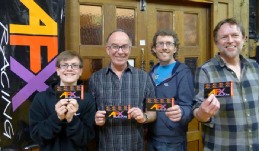 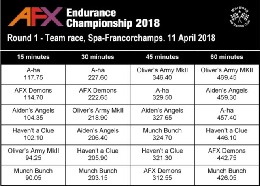 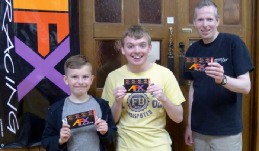 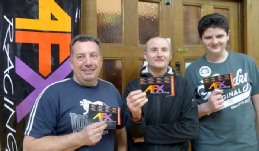 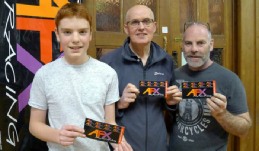 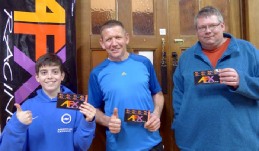 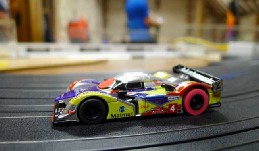