It was a fun evening at the Barn on the fast and flowing Circuit of the Americas layout. Only 14 racers this time, but that meant we could run a mammoth two-hour race with four teams running thirty minutes on each lane. It was brilliant!

The second round of the AFX endurance championship was very different from the first race in February. A sunny Wednesday, just after the long Easter weekend, and with lots of regulars busy with holiday activities meant we were just half the number of racers. Every cloud has a silver lining - the fourteen drivers were split into four teams and the race was doubled in length from the usual sixty minutes to two full hours. The teams would run for thirty minutes on each lane.

The Circuit of the Americas layout was a big one and had a huge variety of challenges for the drivers, which really suited the WHO Mega-G+ club cars and their wonderful AFX Peugeot Le Mans Prototype bodies. We were all set for the big Easter race...

Right from the off some things were clear. With a big track and each marshal covering several corners, staying on the track would be key. It also looked like the middle two lanes - red and blue - were the best lanes, but it might just be the performance in yellow and white that would be the difference between winning and losing. None of that was exactly rocket science, but how the teams put that knowledge into practice is what's important.

First in red lane were Oliver's Army - Oliver joined by Simon, Mike and Terry. They certainly put the hammer down, but the Three Amigos - Ryan, Andy and Neil - matched them lap for lap for most of the half-hour session, before dropping back a little at the end and finishing eleven laps adrift. Blue lane certainly had some tricky points, especially the short shoot to turn twelve, coming off the main long straight. The Three Amigos wouldn't be the only team to have problems there.

Sixteen laps back were 'You're Putting Me Off', with Corey, Duncan and Jamie having a difficult first half hour in white lane. Fourteen laps behind them Aaron, Tony and Stephen - Team 'Stop Distracting Me!' - had clearly been distracted on yellow lane. Theirs was the worst score of any team on any lane all evening...

This was the opportunity for the top two to maintain their momentum and for the others to redeem themselves after a tricky start. The lap times were certainly tumbling. Ryan had won the race in February and was determined to show it was no fluke. Although the youngest of all the racers, he was confident of his strategy and not shy to tell his more senior Amigos what to do. The team really hit their stride in red lane, scoring a massive 230 laps and giving themselves a thirty-three lap lead over Oliver's Army. They had finished the two middle lanes and now had to defend that lead in the gutters. Would it be enough?

Oliver, Simon, Mike and Terry had certainly done a more than decent job in yellow lane, their 186 laps putting them in second, twelve and a half laps ahead of Corey, Duncan and Jamie. If the Three Amigos had to worry about a challenge, it was probably 'You're Putting Me Off' they had their eyes on. A big score of 200 laps on blue set them up nicely with red still to come. And 'Stop Distracting Me!' weren't completely out of it. They had both red and blue to come - and they'd be joined by Keith for the final hour, after a late finish at work. However, two sub-optimal scores in the gutter lanes had left them nearly eight-seven laps behind the leaders. A big hill to climb.

I did say that it would be teams' performances in the gutters that might win the race... The Three Amigos pulled out 197 laps in yellow, coming second in the half-hour segment to 'You're Putting Me Off'. The gap between the two - twenty-eight laps - was important, but it was probably the Three Amigos who were happiest. That gave them an eighteen lap lead, with both teams ending on a gutter lane, the Amigos on white and YPMO on yellow. Barring big disasters and even bigger miracles, that would be the race for the win.

Oliver's Army had a second solid half-hour on the gutters, but would have it all to do in blue. Behind them, 'Stop Distracting Me!' continued to struggle. Now over a hundred laps back from the leaders and sixty-seven laps adrift of third place, they really had nothing to lose and could have a fun run in red lane for the final thirty minutes..

With that gap between the top two at eighteen laps, the first ten minutes would be vital. Neil went first for the Three Amigos, up against his son Corey. Neil was immediately in the groove, leading the first few laps until 'Stop Distracting Me!' found their rhythm in red. Neil pulled out a few laps lead over Corey, until a dodgy couple of minutes allowed Corey to peg him back. The two lanes - yellow on the inside, white on the outside - had their tricky bits on different parts of the circuit, so racing each other was fraught with danger. But with the win a stake, both teams were going hard at each other.

Neil handed over to Ryan with a four lap lead. Corey handed over to Jamie. It remained cat and mouse for another ten minutes. Ryan was certainly under pressure and apart from his own dodgy couple of minutes when he lost a little concentration, he held his nerve superbly. At the final hand-over, the Three Amigos led by three laps in the segment and twenty-one laps overall.

Duncan was quick out of the traps for 'You're Putting Me Off' and shaved some time out of Andy, who had the luxury of being able to ease himself into white lane. When things settled down, they were lapping on a very similar pace. Andy began to find extra speed in white lane and Duncan just wasn't going to give up. However, as Duncan pushed, yellow lane punished him and a string of offs - one of them big - dropped him back another couple of laps each time. It was a valiant effort, but the margin at the end was fourteen laps, thirty-two laps overall.

Although all eyes were on the battle for the race win, the winners of the final segment were 'Stop Distracting Me!' with a massive 230 laps on red lane, all but matching the Three Amigos’ best score of the evening. Finally things came good for Aaron's team and they finished a mere fourteen laps behind Oliver's Army after Oliver's team had a tricky final stint in blue.

And that was the race... Huge congratulations to the Three Amigos, especially to Ryan on a second successive AFX Endurance Championship win and a perfect 320 points on the championship table. Ryan went home with an AFX T-shirt, an Easter egg, AFX stickers, a Circuit of the Americas sticker and a WHO winners medal. That's quite a haul of loot! Thanks to a recently-arrived package from AFX HQ in Reno, we have a box of AFX prizes and everyone went home with some stickers. It being the Easter team race, a chocolate egg also went to each of the captains, plus one to Stephen for running race control so perfectly. We don't want any of our younger racers experiencing chocolate-withdrawal symptoms...

Sure, it was an unexpectedly different evening at the Barn, but the long race on the big track was brilliant. Massive thanks to everyone who came early to set up and who stayed late to pack away. Next up for the AFX Endurance Championship is a heats and finals 'sprint' race on Wednesday 16 August, running on a layout inspired by Fuji in Japan. It might just be crucial in deciding the championship. 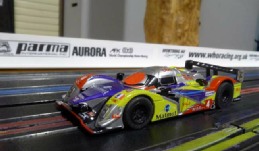 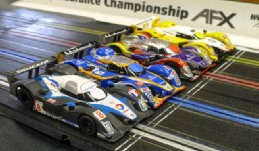 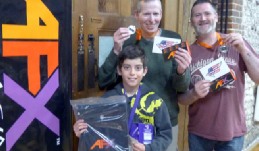 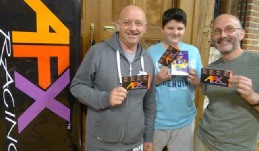 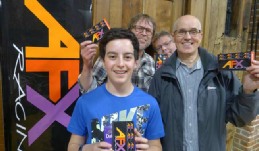 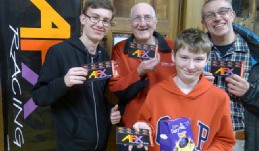 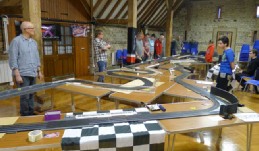 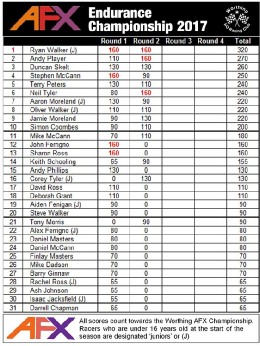 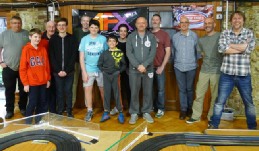 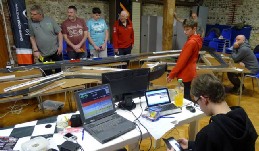