Our fourth WHO/digital Wednesday of the year saw seventeen people take to the grid for a Nascar club car team race and a Trans-Am pairs race. The results, stats and some pictures are on the right, plus there’s a video over on YouTube. Updated championship tables are on the 2019 season page.

The penultimate Digital Wednesday of the year saw seventeen drivers take part in some excellent Nascar and Trans-Am racing - battling for race wins and for crucial championship points. Simon's layout certainly required plenty of concentration - perfect for a field of experienced WHO/digital racers.

The seventeen drivers were divided into five teams of three and one pair. Four fifteen minute segments would make up the hour of racing, drivers swapping after five minutes - apart from the duo of Jerome and Terry who'd swap halfway. The winners of each stage would swap cars with the sixth place team, second with fifth and third with fourth. With all the practicalities sort out, we were ready to race!

Stage One - 15 minutes.  For a gentle re-introduction after two months off, the RCS64 race management software ran with just a fuel simulation for the first stage. It was a very close race until the Unity Taurus of Matthew, Andy and Rob pulled out a two lap advantage in the closing stages. There were then three cars locked together on 46 laps - Ash, Jean and Peter with the Dewalt Taurus; Jerome and Terry's STP Ford; and the Home Depot Pontiac of Simon, John and Daniel. A further two laps adrift were Mike D, Dean and Duncan with the Juicy Juice Ford - two laps ahead of the Coca Cola Ford of Alex, Alex and Mike McCann.

Stage Two - 30 minutes.  After a car swap and now both fuel and tyre simulations switched on, we were racing again. It was the turn of Mike D, Dean and Duncan to shine - this time with the Dewalt car - finishing on 48 laps. Jerome and Terry's orange Pontiac rolled in second, two laps behind, but taking the overall race lead. The Alexes and the other Mike drove the Unity car to third, equal on 45 laps with the Juicy Juice car of Ash, Jean and Peter. The top two from the first stage came in fifth and sixth on 43 laps. Overall, the top five were covered by just three laps - Alex, Alex and Mike six laps behind the leaders.

Stage Three - 45 minutes.  We stayed with fuel and tyres for the penultimate segment. The Dewalt Taurus was again the winning car with 48 laps, this time piloted by Simon, John and Daniel. Just a lap back were Mike D, Dean and Duncan with the blue STP car. The top two in the stage were also top two overall - Mike D's team holding a one lap advantage going into the final fifteen minutes.

The other teams had all lost ground. Matthew, Andy and Rob put in a decent score of 44 laps with the orange Pontiac to sit three laps behind the leaders overall. Ash, Jean and Peter had finished fourth in the stage with the Unity car to take fourth overall, just ahead of Terry and Jerome who had struggled with the Coca Cola Ford. Ash, Ash and Mike had struggled slightly more with the green Juicy Juice car. These were the two cars that would be handed to the teams leading the race for the final fifteen minutes…

Stage Four - 60 minutes.  The race began on a damp track, with rain arriving after four minutes and everyone changing to wets. After the first driver change, Jerome and Terry were in the lead with the blue STP Ford, a lap up on the two teams of Ash, Jean and Peter and Simon, Jean and Daniel. Another lap back were Matthew, Andy and Rob, who were a lap up on Mike D, Dean and Duncan. That meant Simon's team were just ahead overall. The rain soon stopped, but left a very wet track. The sun came out with seven minutes to go and the track began to dry.

Mike D, Duncan and Dean struggled with the weather and made a mess of their tyre choices, dropping them to the back of the field. Most teams chose Intermediates and it was Ash, Jean and Peter who navigated their way most effectively through the changing track conditions, leading by a lap coming up to the final driver change. Simon's team held second and took Hard tyres earlier than everyone else. Jerome and Terry were on the same lap on Intermediates.

The track was still damp at the final driver change and Intermediates were still probably the best choice of tyres. Rob was making excellent progress on Intermediates, overtaking Terry, Jean and moving up to the same lap as the leader Simon - all of them on Hard tyres. Dean was trying to make up some ground on Intermediates and was soon in fifth and closing in on Terry. However, more problems for the former race leaders dropped them to the back at the end. At the front, Simon held off Rob to take the stage win and the overall race win - Simon, John and Daniel finishing two laps ahead of Matthew, Andy and Rob.

Ash, Jean and Peter finished the stage third and took third overall, four laps off the winners. Mike D, Duncan and Dean were cursing their luck, having finished last in the stage, but enough for fourth overall, just a lap ahead of Jerome and Terry. Congratulations to Simon, John and Daniel on a hard-fought victory. After the traditional team photographs and medal presentation for the winners (thanks to Professor Motor for the stickers) it was time to move on to the Trans-Am pairs race...

Nine cars were entered for the Trans-Am pairs race. Matthew required a randomly-chosen racing partner, who was John for the ten-minute qualifying heats. They went in the first race. Simon and Duncan's Ford Falcon XB lead at halfway, but they had to make do with second after an excellent second five minutes for Mike D and Jean's Camaro. Matthew and John's Camaro was third, Mike and Daniel's Pioneer Mustang fourth and Terry and Rob's Javelin fifth.

Ash and Andy's Javelin blitzed the second heat, taking overall pole position. Alex and Dean were second with their fabulous Pioneer Charger, slotting into third place in the feature race behind Mike D and Jean and just ahead of Simon and Duncan on fastest lap time. John and Alex's third place in heat two put them fifth in the feature race. The sixth and final place went to Matthew - Peter and Jerome's Pioneer Camaro had looked really quick but didn't make it to the end.

Consolation race - 5 minutes.  Peter and Jerome made up for their disappointment in the heats with an absolutely blistering drive in the consolation race. The Javelin of Terry and Rob was locked in an exciting battle with Mike and Daniel's Mustang. At the end of the five minutes, Peter and Jerome finished with a huge score of 20 laps, three laps ahead of the other two with the Javelin just beating the Mustang to second.

Feature race - 5 minutes.  The feature race was set up as a damp-rain-drying race, but we forgot to change back the race length to ten minutes! When the rain came after a minute, the error was spotted - but we decided to continue in what would be a chaotic and frantic sprint to the line. As heavy rain fell, the top five were on the same lap but on completely different tyres. Pole-sitters Ash and Andy were on Soft tyres, Mike and Jean on Wets and everyone else on Intermediates. Soon after the panic of the rain - with everyone apart from the two Camaros of Jean and Alex F pitting for Wets - it was time for the mid-race driver change…

In such a short race, a second stop was a disaster. Jean and Mike managed a fuel-only stop, putting them into a comfortable lead, ahead of John and Alex who waited until the driver change to swap to Wets. Ash and Andy had gambled on no tyres or fuel at the driver change, leaving the pits third and fought back to take second place. That was until a late splash-and-dash dropped the Javelin down to fifth, just behind the Charger of Alex and Dean. Mike and Jean cruised to victory on the same tyres they started on, a lap ahead of John and Alex. Simon and Duncan took an excellent third. Matthew, partnered by Peter, rolled in sixth.

Jean and Mike's win means they only need to turn up in July and race together to win the Trans-Am drivers' championship. Alex sits third, two points ahead of Andy and Ash.

So that was the end of another excellent Digital Wednesday at the Barn. Congratulations to our winners and a big thank you to everyone who came along and took part. Special thanks goes to the set-up crew, Daniel and Andy on race control and to everyone who stayed behind to pack away. We wouldn't have any WHO/digital racing without the generosity and enthusiasm of Mike D - so a massive thank you from all of us. 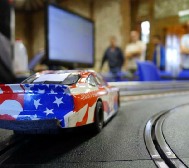 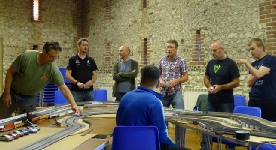 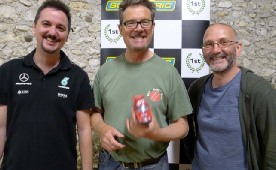 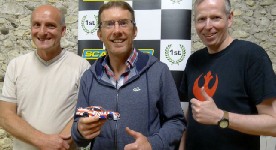 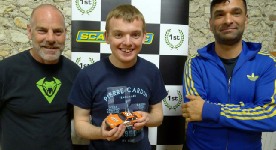 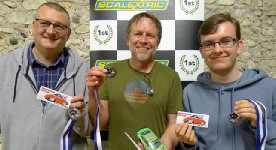 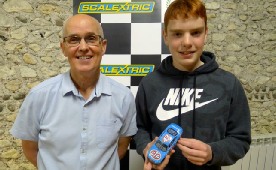 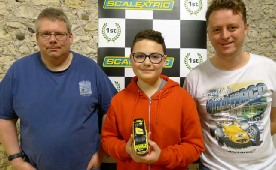 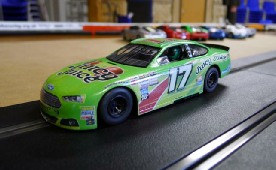 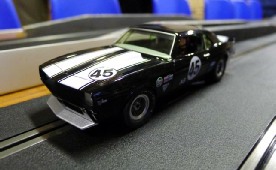 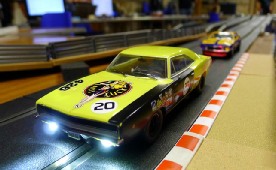 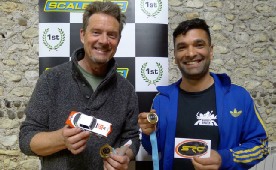 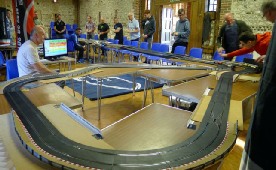