After a gap of four months, the big Scalextric cars made a return to the Barn for another WHO digital Saturday. In the interim, a maintenance evening had spruced up both cars and track, plus WHO road trips to the Havant and Orpington swap meets had promised to swell the Goodwood Revival field.

The early morning set-up team put together Simon's superb track design and the SSDC computer system was fired up and ready for some practice around 10.30am.

By 11 there were twelve of us to give four teams of three for the Nascar team race and time for each team to run each of the four cars - the Jetsons Cartoon Network Ford, the Coca Cola Chevy, the Unity Ford and the Home Depot Pontiac.  Names were picked out of a suitable receptacle (Mike's hat being unavailable), team names decided upon and we were off...

It was clear from the first fifteen minute leg that this would be a close race. Annihilation Machine (Duncan, Deborah & Stephen) led the way, but were just a lap ahead of the Totally Incredible Track Stars (Alex, Keith & Mike McCann) and the Player Specials (Andy, Andy & Simon). Three laps back were Florence and the Machine (Florence, Matt & Mike D).

As the race went on, the lead swapped between the Player Specials and the Track Stars, with the Annihilation Machine losing a bit of ground and Florence and the Machine hanging on in there. With the last fifteen minutes looming, Florence and Matt had to head home and David joined Mike for one final push.

Andy handed over to Simon and Alex passed the white controller to Keith. And it was a frantic five minutes with two fine drivers right on the limit. Keith edged into the Player Specials' overall lead, cutting it to half a lap. That meant if the race ended at the right moment for Keith, the difference in the stint would register as just four laps and the race win would be shared. Tragically, Keith had to pit for a splash 'n' dash late in the stint and that half lap - and the race - was lost.

After an hour of racing, the Player Specials won by a single lap. They were delighted, especially as Andy Phillips had just won his first ever WHO medal. Disappointed by their second place, the Totally Incredible Track Stars had the consolation of race control calling out their team's acronym... Third were Annihilation Machine, twelve laps back from the winners and six laps ahead of Florence and the Machine.

The Barn had filled up some more by the end of the Nascar race, just in time for some of Simon's legendary WHO dogs. Incredibly, Simon managed to cook lunch (with the help of Barbs) and win the morning's race...

At 1pm the racing began again with a full GT rotation - everyone running four minutes with each of the six GT club cars. The lunchtime influx saw seventeen on the grid, including a few digital novices.

Stephen took over race control and did a splendid job of keeping the heats rolling over and the excitement high. First-timer David was the first to finish his six heats and set an impressive marker of eighty-nine laps. David knew he wouldn't be at the top of the tree for long and it was Duncan that set a new score to beat of ninety-seven laps.

The only racers to beat Duncan went over a hundred laps. The first was John, who scored 103 laps. Keith was tantalisingly close to drawing equal, needing seventeen laps, but only getting sixteen. Mike D needed to do the same - or get eighteen to go into a clear lead - but seventeen and a share of the lead is what he got.

That left Andy Player in the final heat needing exactly the same as Keith and Mike to draw or to win. He'd just missed out on nineteen laps in the previous heat, crashing at the final corner, so was thoroughly revved up... Perhaps a little too revved up and a crashy start meant he managed just sixteen laps and a share of third place with Keith.

It had been an incredibly close two hours of racing - Mike D and John shared the win and Alex claimed the medal for top junior. That eighty-nine lap score of David's gave him an impressive eighth place, ahead of quite a few seasoned digital racers.

That was the end of the club car racing and time for our WHO digital 'bring your own' class - the Goodwood Revival pairs race. On the grid were John's new Ford GT40, Stephen's Mercury Cougar, Keith and Deborah's Boss Mustang, Andy Player's '69 Camaro, Duncan's Escort, Mike D's 1970 Camaro and Andy Phillips' new 1970 Camaro.

With those seven cars, we ran two qualifying races of ten minutes, with a driver change at halfway. The pairs with the fewest laps would be eliminated. Four laps short of safety, it was Andy Phillips and Barry who got the chop. Keith and Deborah had claimed pole position with thirty-four laps, one lap ahead of Mike D and David G. It was close - the top five covered by three laps.

The feature race was lengthened to twenty minutes, with a driver change at halfway. After nine minutes, Andy Player had a lead of two laps over Deborah and David G. Alex was two laps further back driving his dad's GT40, a lap ahead of Simon in the Escort. Stephen was struggling with the Cougar, a further two laps back.

We know those gaps because the track shorted out and we yellow-flagged the race. With the short sorted, we continued through the driver change until another frustrating short with five minutes to go. That left Dave R (with Andy's Camaro) tied in the lead with Keith's Mustang and Mike D's Camaro. Two laps back was John's GT40. Five laps adrift was Duncan's ailing Escort, who was just one lap ahead of Mike McCann in the Cougar.

Investigations showed it was a loose weight in the Escort that was causing the short circuit and Duncan retired his car. That left a five minute sprint to the chequered flag. Keith had been driving beautifully all day and he put in lap after perfect lap, a performance than neither Dave or Mike could match. Dave admitted to having "a bit of a loss of concentration" and dropped back to tie for third with John's GT40. Mike also cracked and finished two laps behind Keith in second place.

Deborah knew the win was in the bag and erupted with delight as the race ended. Having been there or there abouts since the debut of their Mustang, the win was well-deserved after superb drives from both Deborah and Keith. With the Escort's retirement, the Cougar inherited fifth place - disappointing after a win last time out in July.

And that was the end of the day, more or less. Before packing up we tried a quick new single-driver Goodwood Revival format that, time-permitting, we may add to future digital Saturday schedules. John won the 20 lap race with his new Brut-sponsored Camaro - another recent swapmeet purchase.

Huge congratulations to all the day's winners and a massive thank you to everyone who took part in an excellent day - especially to those who helped set up and pack away; to Simon and Barbs for preparing lunch; and to Stephen for running race control for the GT race. We do it all again on the Saturday before Christmas! 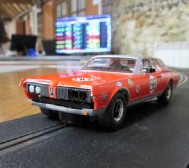 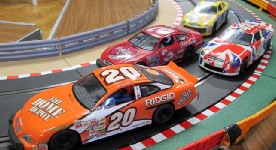 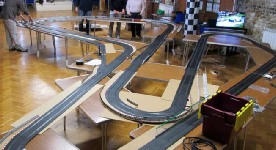 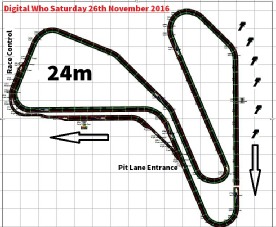 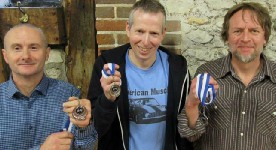 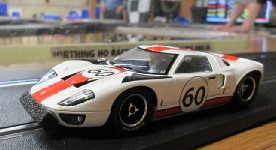 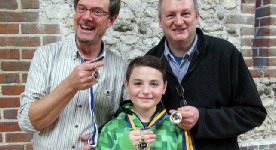 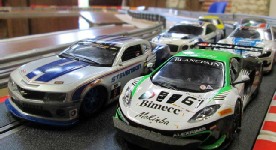 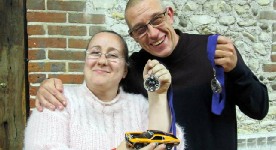 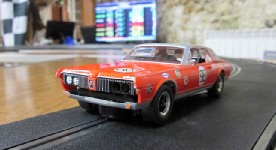 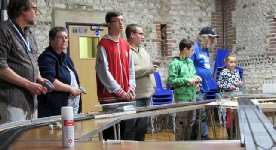 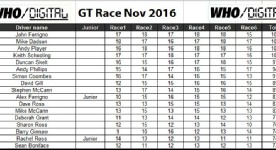 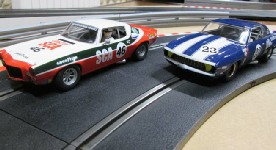 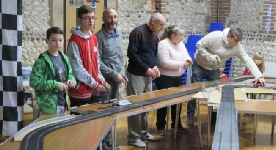 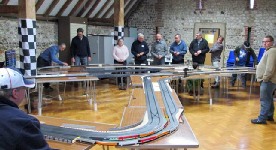