Our May digital evening saw another great turnout of twenty-three racers and one of the closest Trans-Am races we have seen at the Barn. The Nascar team race was excellent fun and very competitive too.

The evening’s results and some pictures are on the right, with more pictures via the Flickr button. A video of some of the action is available via the YouTube button.

Simon had designed a particularly excellent track for our May Digital Wednesday. It looked rather good on paper and proved even better in the flesh - a fine combination of long straights, sweeping bends and the occasional tight radius two curve to keep us on our toes. The pit complex was nicely contained inside a loop section, giving good visibility and plenty of time to choose an empty pit stall. It all went together quickly and we even had a spare table over at the end...

Twenty-two racers came along for the Nascar team race, giving us four teams of four and two of three. The six junior captains gave strategy, driver order and team names plenty of thought... and then we were ready to go racing.

We eased everyone back into digital racing and the RCS64 software with a fuel-only stage one. There was certainly a little rustiness around and you could see who'd done a few pit stops during the practice session and who hadn't... It was the two lean-and-mean three-driver teams who were on it from the start - Oliver, Mike D and Terry (aka Oliver's Rocket) set the early pace, but couldn't stop Anglo-Franco (Jonathon, Jean and Alex) finish the first twenty minutes with a three lap lead. The leaders had 67 laps, second place had 64.

The battle between the top two had left the other teams well adrift. Jerome's Jets and Corey's Team finished on 60 laps, Ryan's Fish 'n' Chippy were on 59 and Aiden's Jolly Hockey Sticks had been the most rusty of the pack, finishing on a shameful 57 laps - things could only get better for Aiden, Jim and the two Andys.

With the addition of the tyre-wear simulation and more complicated pit stops, you'd have expected lower scores in stage two - but you'd be mostly wrong. This was a much closer twenty minutes of racing and Jerome's Jets and Jolly Hockey Sticks were right up on the pace of the two leading teams, giving us a four-way fight for the stage win.

In the end, Anglo-Franco did it again, finishing on 66 laps - two laps ahead of Oliver's Rocket and Jerome's Jets (Jerome, Neil, Matthew and Peter). Jolly Hocky Sticks were a further lap back on 63 laps, a vast improvement on their first stage. Then there was a big gap back to a couple of teams who might have struggled a little with the extra pit stop options - Fish 'n' Chippy (Ryan, Graham, Daniel and Mike Mc) scored 58 laps and Corey's Team (Corey, Simon, Ash and Paul) managed just 56.

Going into the final twenty minutes, Anglo-Franco had a five lap lead over Oliver's Rocket. Barring a combination of utter disasters and complete miracles, that would be the battle for the win. Jerome's Jets and Jolly Hockey Sticks would fight for third, just four laps apart. And Fish 'n' Chippy were just a lap ahead of Corey's Team to see who would come fifth and sixth.

This time we added a damp, drying track to the complex web of RCS64 simulations - which also gave two more options in the pit stop menu. All six teams started on intermediate tyres and it was Anglo-Franco who rocketed off the line and led a gaggle of four teams by two laps at the first driver change. Jerome's Jets were at the rear, six laps off the leaders.

The track had completely dried just before the twelve minute mark, all six teams correctly anticipating the change - five swapping to hard tyres and Jolly Hockey Sticks choosing the soft compound. Positions were as they were three minutes before.

After the second driver change, Anglo-Franco held a two-lap lead over Fish 'n' Chippy and Oliver's Rockets, who had Mike D at the helm for the final double-stint. Mike needed a seven lap swing to claim an improbable win - quite an ask, but his team mates believed in him. Jolly Hockey Sticks were just a lap behind, still bucking the trend on soft tyres. In fifth, Corey's Team were dropping back, three laps behind fourth and just a lap ahead of Jerome's Jets.

Moving into the final five minutes, Oliver's Rockets had overtaken Fish 'n' Chippy into a clear second place - but still two laps back and a pit stop looming. Jolly Hocky Sticks were closing on third place, Corey's Team had rebounded and Jerome's Jets were plummeting.

Rather than Mike challenging for the lead, Alex was pulling Anglo-Franco even further ahead and Aiden was driving superbly to close the gap on the second-place car. As the chequered flag fell, Anglo-Franco had scored a massive 69 laps, giving them a margin over Oliver's Rocket of three laps, Jolly Hockey Sticks finishing on the same lap and just failing to grab the runner-up spot for the stage. Back on 62 laps, Fish 'n' Chippy finished ahead of Corey's Team. Jerome's Jets were back on 58 laps.

That gave Jonathon, Jean and Alex a thumping overall win, eight laps ahead of Oliver's Rockets. Jolly Hockey Sticks won the tussle for third by four laps, with Fish 'n' Chippy maintaining their slender one-lap lead to take fifth. Maybe not the closest of team races, but it had been an exciting one and brilliant fun to drive.

We waved goodbye to Peter, Jerome and Andy Phillips and welcomed Steve to make up a perfect ten pairs for the Trans-Am race. Steve would fill the empty seat in Paul's new Genesee Beer Chevy Camaro and they'd race in the first of two ten-minute qualifying heats.

The first qualifying heat looked quick. Oliver and Ryan were the class of the field, their 1970 Camaro newly-shod with Dadson urethanes. The brothers finished on 35.50 laps and claimed fastest lap. Aiden and Terry came through in second place, hoping their 33.75 with Andy's reliable Al's Body Shop Camaro would get them in the feature race. Simon and Matthew's Mustang was three laps back, along with Mike and Daniel's Cougar - they were thinking about the consolation race. So were Paul and Steve after a tricky, but very useful shake-down session with the Camaro.

A power issue into turn two made the start of the second qualifying heat a bit challenging. The fault was quickly sorted and the drivers soon got into the groove. It was fast. Mike D and Jean piloted the big Ford Falcon XB into pole position with a massive 37.75 laps. March's Trans-Am winners Corey and Neil put their Camaro second, just ahead of Ash and Andy's Javelin. Graham and Jim's Mustang also beat the Walker brothers' top score from the first heat, but things looked iffy for Alex and Jonathon... A couple of missed laps out of fuel had put them in deep trouble, but a fastest lap and a great recovery drive put them through to the feature race, three quarters of a lap ahead of Terry and Aiden.

The consolation race was the usual five minutes of mayhem. Simon and Matthew took a small advantage over Aiden and Terry, with Daniel and Mike showing good form in Stephen's Cougar. Paul's Camaro was going better, but definitely needs decent rear tyres. That was the order at the end - the winning margin a lap and the blue Camaro just about holding off the Cougar for second. Aiden and Terry claimed fastest lap.

That just left the Trans-Am feature race - and it was an absolute cracker! Jean and Ash battled for the lead over the first few laps, but the Frenchman had opened a decent lead coming up to the first round of pit stops - Oliver was second, Jonathon had worked himself up to third, Jim was fourth, Ash fifth and Corey sixth. Everyone was on the same lap - it was incredibly close and competitive racing.

After those first stops, Jonathon had closed right up on Jean and Ash was up to third. Any mistakes were costly, so a communication mix-up and an unscheduled pit stop dropped the Javelin from third to sixth. Meanwhile, Jonathon was driving the red Camaro without error, moving past Jean into the lead and stretching out a handy lead going into the driver change.

With pit stops and driver changes completed, Alex was now in control of the race, Mike and Ryan in hot pursuit and Andy not far behind in fourth. Graham and Neil both had work to do to get back in the race.

Alex replicated Jonathon's smooth, error-free race, maximising each fuel run to go just a little further... Ryan, Mike and Andy all came in for a stop before three-quarter distance, which proved just a little too early. Alex, Graham and Neil were able to stretch their fuel runs and it looked like their stops would see them to the end.

The lead for Alex was over a lap with a minute and a half to go. Ryan dived into the pits from second and a long stop dropped the #5 Camaro back to fourth. Mike was looking marginal on fuel and chose to splash and dash. Andy took second, but was concentrating more on his fuel levels than driving hard. A last-gasp decision to pit for fuel dropped Andy behind Mike, Ryan and Graham - those four covered by just over half a lap when the flag fell. Up front, Alex had finished the race on fumes - his fuel gauge well in the red and showing just 4%. Talk about cutting it fine!

Huge congratulations to Alex and Jonathon on their momentous Trans-Am victory. It was fabulous drive, no doubt boosted by their team race success earlier in the evening. The win was a first at WHO for Pioneer - Alex has persevered with the car, which hasn't always been as quick or nibble as the Scalextric Trans-Ams. That work has finally paid off.

A big thank you to everyone who took part in another excellent evening of digital racing at the Barn. Special thanks, as always, goes to the set-up and tear-down crews and to Daniel for his invaluable contribution to the race control team. That was our twenty-seventh WHO/digital event - none of which would have happened without the loan of Mike D's awesome Scalextric digital set-up. Thank you Mike! 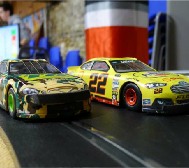 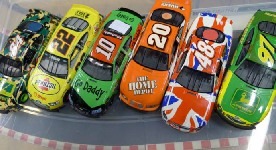 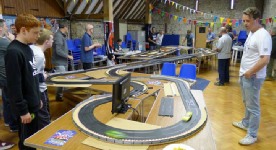 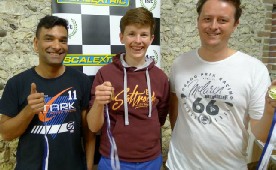 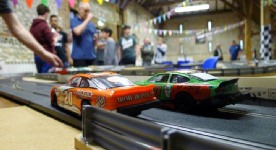 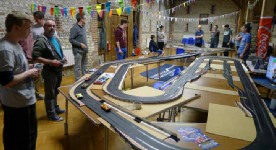 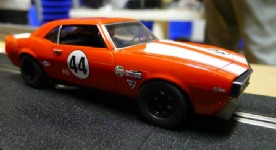 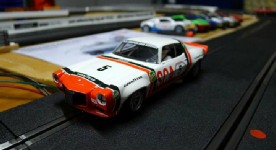 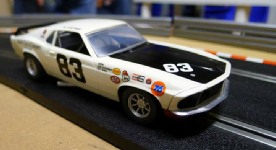 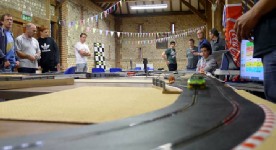 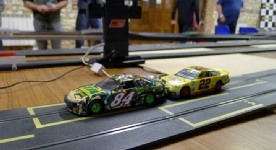 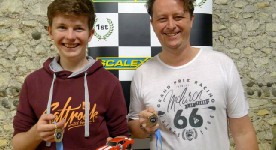