Our digital race at the Barn came just two days after the terrible loss of life in Manchester, so it was inevitable that those affected would be in our thoughts... Maybe a little subdued, we cracked on with setting up another of Simon's superb track designs and getting the new Truspeed controllers ready so WHO/digital could go fully wireless for the first time.

As the Barn filled up with racers, everyone got some practice and enjoyed a little bit of roaming round the track with the Truspeeds. Moving away from the traditional 'driver station' was a little disconcerting, but rather exciting at the same time. Along with the big monitor, there was also a smaller screen next to the pit boxes - something that will be essential for RCS64 pit stops in the future.

However, the main event of the night would be a final hurrah for SSDC, the race management system that we've been using since the start of our digital racing at the Barn. We selected six GT club cars - two Maserati Trofeos, a Lamborghini Gallardo, a Camaro, a Bentley and a McLaren MP4-12C - that every driver would race for three minutes. A tiny (50%) fuel tank size was chosen, so at least one fuel stop would be required during those three minutes - otherwise the car would be limping round the track, out of gas.

We ended up with seventeen on the grid, with Pete racing at the Barn for the first time since the summer of 2011. It wasn't technically his first WHO/digital race - he'd helped us organise the WHO/digital roadshow at Brighton's Open Market a couple of years ago.

Pete had to wait to race, as SSDC introduces drivers in strict alphabetical order. That did mean our three juniors got to race early, with Aiden putting in a big score of 17 laps and winning the first race, a lap ahead of Corey. Aiden, Duncan and Graham all hit 17 laps in the second race - and that seemed a good score until Duncan went one better in race three.

Duncan was the first driver to complete his six races, scoring 99.25 laps - an average of just over 16.5 laps per race. Not a bad benchmark, but would it be enough for a win? All eyes were on Graham who'd scored a 16 and three 17s, before hitting 18 laps in his fifth race. Another sixteen in his final race placed Graham on 101.25 laps and making him our new GT race leader.

Graham wasn't getting too excited... He'd seen Mike D start his races with a huge eighteen laps in the stars & stripes Trofeo. Mike followed that up with two seventeens, two more eighteens and finished with a nineteen - the first of the night - with the other Trofeo. His score of 107.25 laps looked unbeatable, and his average of just under 18 laps was stunning.

Mike's strategy had been to run hard and to fill the tank at halfway. Others had  tried - and failed - to stroke the cars round without a pit stop, but needed a quick 'splash & dash' near the end. Andy - the king of fuel conservation and our GT winner in January - went with the latter strategy. Have messed up his first race with a bad start and running out of fuel well before the end, it looked like Andy wasn't going to threaten the lead...

Somehow, Andy managed to stretch the small tank of fuel almost to the end, whilst keeping up a decent pace, scoring 18 laps in his second race and following that with three more 18s and a big 19 lap score in the middle. Amazingly, that put him on 107.75 laps, squeezing into the lead just a half a lap ahead of Mike D. A tantalisingly close finish.

The SSDC rotation brought the juniors back on track for some late excitement. Going into the final race, Aiden had a slender lead over Corey. Aiden finished with a 17 lap score and Corey had a disaster, scoring just ten laps. That gave Aiden his first individual junior medal and dropped Corey behind Aaron.

After a brief medal ceremony, it was time to close down SSDC and launch RCS64 for the Goodwood Revival pairs race. Negotiations about cars and pairings were concluded as Andy and Mike D set up RCS64 - we had seven cars entered, which meant two qualifying races and one pair would fail to reach the feature race.

We'd decided to offer racers just the pure driving experience of RCS64 this time, turning off all the extra features. That meant getting used to the brake button and adjustable sensitivity knob on the Truspeed controllers. The cars certainly felt very responsive and being able to brake at the end of the straights was lowering lap times. After a two minute practice session, each qualifying race would be eight minutes long, with a mandatory driver-change pit stop at halfway.

The first heat saw championship leaders Mike D and Graham up against the father-and-son pairing of Mike and Stephen McCann with their GT40, plus Duncan and Terry's Escort. Neil and Corey were bumped to the second race after problems with their on-loan Pioneer Mustang. It was Mike and Graham's 1970 Camaro that ended with a whopping fifty laps and a sub-eight second fastest lap (7.910 secs) which would be the quickest of the night. The Escort was eight laps back, the GT40 a further four behind - leaving Mike and Stephen biting their nails over qualification for the feature race.

Neil and Corey negotiated another loaner car from Mike D, this time an orange Scalextric '69 Camaro. And they were really quick, defending their lead from another fast '69 Camaro in the hands of Ash and Andy. The orange car would win the heat by exactly two laps - 49.25 to 47.25. On the pace of the top two cars, but a little crashy was Jean and Aiden's GT40 MkII. They were beaten to third place by Simon's brand new Mercury Cougar - Simon partnered by Pete. All four cars beat the McCann's qualifying score, so it was the McCann GT40 that was eliminated.

The feature race was lengthened slightly to ten minutes, with the driver-change pit stop at halfway. Unsurprisingly, it was the top three qualifiers - Mike D and Graham; Neil and Corey; Ash and Andy - who set the early pace. A big impact for Simon's Cougar seemed to have wrecked the car, but some determined pit work by Mike D eventually got Simon and Pete back on track. Disaster also struck for Neil and Corey. Having qualified second and run strongly behind the leaders in the early stages, their Chevy Camaro retired after twenty-four laps. Ash and Andy inherited second place and would battle Mike D and Graham for the win.

After the driver change, Mike D had a four lap gap over Andy - the leading 1970 Camaro was definitely quicker than the '69 car... but Andy was keeping it on the track slightly better. The gap ebbed and flowed, but remained four laps at the chequered flag - Mike and Graham taking their third Goodwood Revival win of 2017. Nine laps behind, the battle for third was close. In the end, it was Jean and Aiden who finished almost exactly a lap ahead of the Escort of Duncan and Terry. A superb come-back drive saw Simon and Pete finish less than four laps further back.

That was the end of the action, just a little after ten o'clock. Congrats to all our medal-winners and a big thank you to everyone who took part and made it an exciting and enjoyable evening of digital racing at the Barn. Particularly huge thanks goes to Mike D, Simon and Duncan who stayed behind (not quite into the early hours, but not far off) to pack everything away at the end. Our digital nights take a little more time to set up and pack away, but they are worth it.

Digital racing returns for a full day of WHO/digital action on Saturday 17 June, when we'll be running only RCS64 and we'll introduce all the features of this amazing digital race management system. 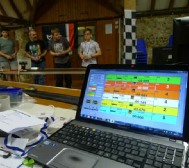 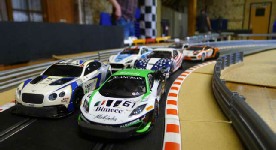 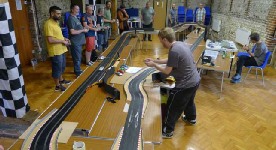 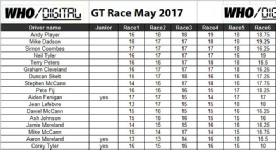 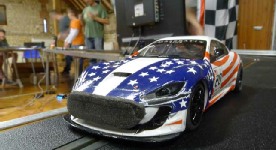 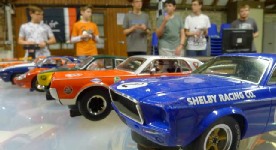 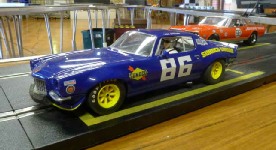 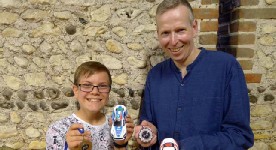 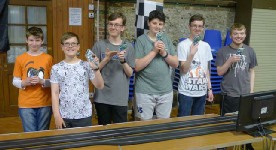 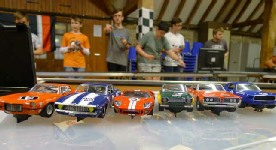 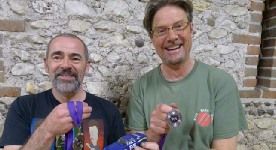 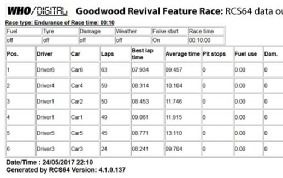 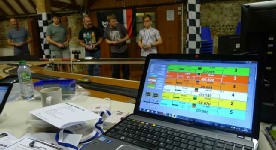