It was all a bit déjà vu at the Barn for our second WHO/digital SSDC Saturday at the start of May half-term.

Firstly, we had yet another brilliant track, designed by Mike D and built by a dedicated team in record time. The track utilised plenty of wide radius 3 and radius 4 turns and had a nice long pit lane entry. The stand-out feature was the return of the bridge, this time vaulting over two parallel straights. The track was a feast for the eyes as well a thrill to drive.

First up was the GT competition. With a bijou round dozen on the grid for the morning, we'd run four twenty-lap six-car qualifying heats, with ten points for a win and five down to one point for second to sixth. The top three on points would qualify for the A final, the next three for the B final and the remaining six would fight out to fill the three empty places in the B...

It was intended be a quick-fire format with lots of close racing to build up an appetite for Simon's lunchtime feast. At least that was the plan! Just like last May, we were plagued with technical issues that were varied, unrelated and relentless. We had track power problems, shorts, SSDC problems, laptop issues and more... Everything was sorted out eventually, but it was a slow old process, punctuated by the racing.

Andy picked up two routine qualifying wins, with Stephen and Simon also grabbing a maximum score that got them in the A final. The next three were Duncan, Ned and Mike D, with the rest in the C. Thankfully, by the time we got to the finals, everything that was going to go wrong had done so and we had three excellent races.

The top three finishers in the C final would move up to the B, giving us an epic contest. Twenty laps meant at least one pit stop for refuelling, two if you were pushing and three if your car was a bit too stuck down. Different driving styles meant different strategies and it could be anyone's guess who would be up there at the end...

The battle looked like it would be between Tony, Mike McCann and Paul at the start, with Hayley, Neal and Daniel waiting to profit from any slip-ups. Refuelling issues for Paul dropped him back. Neal recovered well from an early drive-through penalty and was able to challenge Tony, before being overtaken by Hayley as the first pit stops came round.

As all the pit stops ended and we approached the end of the race, it was Neal who'd driven the best twenty laps to beat Mike for the win. Behind them, the big question was whether Tony could overhaul Hayley for that last step-up position? It was very close, but the answer was no. Hayley was delighted to hang on and beat her dad.

The B final was an equally compelling encounter. This time it was the two Mikes and Ned that got away and tussled for the win. Duncan and Neal kept in contact, which meant it still looked like a five-way fight as the race went past half way. Sadly, Hayley was out of contention this time.

It was Mike McCann who reached the line first, getting the better of Mike D. But it was another massive battle for the final step-up place - Ned cracked under the pressure and Duncan gratefully took third. A distraught Ned came fourth, then Neal and Hayley.

The A final got off to a frantic start, but it was Andy who lead the way into the first pit stops with most of the field breathing down his neck. Coming out of the stops, the pressure was starting to take it’s toll and the two-time GT winner rolled his car out of the reach of the marshals. Any chance of a hat-trick was out of the window.

The two Mikes and Duncan took over the battle for the winner's medal and the pace was intense. Mike D eked out a lead and he kept his cool and his car on the track to finish just ahead of Duncan, with Mike McCann a lap back in third. Simon pipped Andy to fourth, with Stephen sixth and top junior. Mike was rightfully well chuffed with his win having qualified only sixth.

Lunch came an hour or so later than expected, but Simon's feast hit the spot. Replenished and refreshed, we waved goodbye to Duncan and welcomed Andrew, Ben and Nathaniel for the Nascar team race.

The non-mag vibe is always an enjoyable one on Mike D's big tracks. Our fourteen racers were randomly allocated into two teams of three and four pairs to enjoy those wide open turns and long straights. With less time than expected, we'd run three fifteen minute segments and rotate the cars after each one.

It looked like it would be yet another close team race. After the first fifteen minutes, the Three Amigos of Paul, Tony and Andy lead the way with 59 laps, just one lap ahead of Stephen and Simon's Better Than The Actual McLaren (we called them BTTAM).

It was BTTAM who broke the sixty lap barrier in the second segment and took the lead. One In Ten - that was Mike McCann and Neal - moved up to second, three laps adrift and two laps ahead of Daniel and Mike D (The Boss With The Helicopter). The Three Amigos had dropped to fourth, with Andrew, Ben and Nathaniel's Aperture Racing in fifth and Awesome Sauce - Ned and Hayley - in sixth. Ten laps covered all six teams.

As always, the pace continued to rise as the race went on. With the top four covered by just six laps, the last fifteen minutes was going to be interesting. BTTAM faced a challenge with the unfavoured blue Scooby-Doo car and they would have to manage their losses - they did have a decent lead to play with.

Stephen did a good job to protect that lead, which they just about still held on the change-over. One in Ten were close behind after a good run from Mike McCann, but Daniel had made the most progress for The Boss, making it a three-way battle between Simon, Neal and Mike D over that final seven minutes...

As the siren sounded and the cars stopped, The Boss had won the segment, followed by Awesome Sauce, The Three Amigos and One in Ten. It looked very close, but we needed to wait for Hayley to update the spreadsheet to see who'd won the race...

Incredibly, One in Ten, The Boss and BTTAM had all finished with 178 laps. It would all rest on that final track position - The Boss had finished just short of the start line, BTTAM about half a lap back and One in Ten a couple of feet behind them. That was our top three.

In fourth were the Three Amigos, just three laps back. Awesome Sauce had jumped Aperture Racing with their excellent final segment. The whole field was covered by nine laps.

Congratulations - and the medals - went to Mike D and Daniel. That was Mike's second medal of the day, but Daniel's first ever WHO Racing medal.

Sadly there wasn't time for the Goodwood Revival race this time, although the cars looked great in the paddock. Our WHO/digital events are still taking shape and packing away gave us time to think and chat about the format - we'll start looking at the 2016 calendar soon.

Many thanks to all fifteen racers who took part and to everyone who helped set-up and pack away and particularly to Simon who did all that and provided us with well-needed hot food at lunchtime!

Until next time - which will be the Scalextric World Championship race and SSDC Saturday in December. 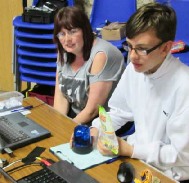 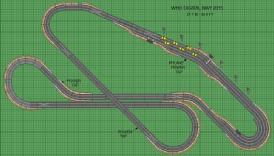 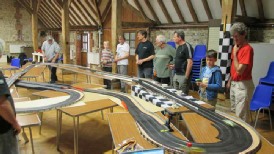 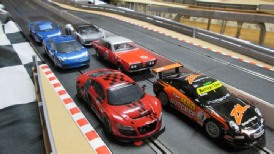 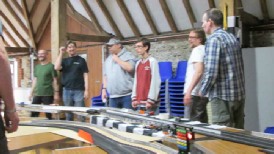 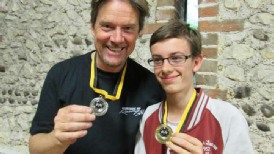 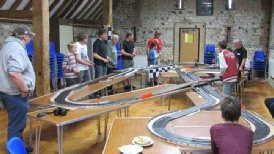 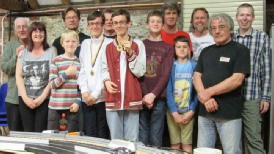 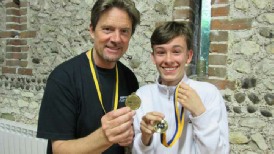 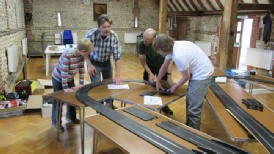