Our last WHO/digital Wednesday before the Coronavirus break saw nineteen people take to the grid for a Nascar club car team race and a Trans-Am pairs race. The results, RCS64 stats and some pictures are on the right, plus there’s a video over on YouTube. Championship tables are on the 2020 season page.

With the Covid-19 Coronavirus storm brewing, it looked like our March Digital Wednesday might be the last racing at the Barn for a while. Most slot car clubs had already suspended activities, but we wanted to meet up, have some fun and say goodbye to each other. While Simon’s monster track was being built, the Barn was set up for minimum infection risk – and anyone having any symptoms of a fever and dry cough was asked to stay away.

Simon’s track was fast, flowing and very long. There were a few tricky bits to master, but a good lap was all about maintaining that flow. Nineteen racers joined us and, with practice over, we were ready to start the Nascar club car team race.

We split the race into four 15 minute segments, driver changes happening at 5 minute intervals. A couple of adults deputised as team captains, as Ash, Alex and Harry stayed at home. Steve and Mike Mc were our nominated over-age ‘jadults’ for the evening. Running just the fuel simulation in the first 15 minutes, it was Jerome, Oli and Terry who set a big score of 47 laps in the orange Home Depot car. They were a full three laps ahead of Daniel, Jean and Matthew, who had the white #10 Valvoline Pontiac, which was particularly fun to drive. Third after the first segment were Mike Mc, Andy P and Peter who had set 43 laps with the yellow M&Ms car.

Then there was a three-lap gap back to fourth – Steve, Alex, Duncan and John not enjoying the green Interstate Batteries car that much. Another lap behind were Ryan, Mike D and Andy D with the only Ford on the grid. Last – and ten laps behind the leaders already – were Oliver, Dean and Simon – they just hadn’t got in the groove with the blue STP Pontiac. However, at the end of the segment, it was all change – the first place team swapped cars with the last placed team, second with fifth and third with fourth…

We went straight to fuel and tyres for the second 15 minutes. Despite a sub-standard 39 laps with the blue car, Jerome, Oli and Terry maintained their overall lead, which was now down to just one lap. Two big scores were put in by the fifth and sixth placed teams from the first segment. Oliver, Dean and Simon hit 47 laps with the Home Depot car, finishing top and grabbing second place overall. Ryan, Mike and Andy managed 45 laps with the Valvoline Pontiac, putting them equal second overall. None of the other teams made it into the 40s – Jerome team’s 39 beating the other three teams, all on 38 laps. That made the gap from first to fifth overall just five laps at the halfway point…

Overall positions hardly changed in the third 15 minutes, as all six teams scored consistently – 43, 44 or 45 laps. Jerome, Oli and Terry hit 45 laps with the M&Ms car – the same as Ryan’s team with the Interstate car and Daniel’s team with the Home Depot Pontiac. That put Ryan, Mike and Andy up to second place, two laps behind the leaders and one lap ahead of Oliver, Dean and Simon who managed 44 laps with the Exide Taurus. Going into the final 15 minutes, Daniel’s team were just four laps off the lead, so it looked like a very exciting four-way battle for the win…

The final 15 minutes was a little bit frantic and a little bit messy. Jerome’s team were back with the blue STP car which they hadn’t enjoyed in the second segment, but it had gone well with Steve’s team. Ryan’s team were back in the white Valvoline car and Oliver’s team back with Home Depot. However, it was the Exide Taurus that really set the pace – Daniel, Jean and Matthew threatening to leap up from fourth place to take the win. As the RCS64 clock counted down, Jerome, Oli and Terry had fallen away badly and the battle was between three cars – the Exide Taurus leading the Valvoline and Home Depot Pontiacs by a lap. If the gap to the white #10 car stretched to two laps, they would win. Mike was on the anchor leg for Ryan’s team, up against Jean who was trying to grab that extra lap for Daniel’s team. Oliver wasn’t completely out of it – he needed to put a lap on Mike and get on the same lap as Jean. It was tense last few minutes, but the order stayed the same – that gave Daniel, Jean and Matthew the segment win and second place overall, but it was Ryan, Mike and Andy that grabbed the overall win, the medals and a sheet of Jadlams stickers each.

We drew breath and sorted out pairs for the final race of the evening. With Ash, Graham and Ed staying at home, there were three Gold-seeded drivers in need of a new team mate. Mike D teamed up with Matthew in the Falcon XC, Jean grabbed Duncan to debut his Penske Camaro and Simon joined Andy to drive the quick, but skittish Javelin. Nine cars required two ten-minute qualifying races, Daniel driving with his dad, before being subbed for Steve in the finals.

Qualifying heat one looked quick. Alex and Dean topped the chart with 35 laps, a quarter of a lap ahead of John and Andy D. Mike D and Matthew finished with 33 laps and Mike Mc and Daniel 27. Two Chevys followed by two Fords. The five-car heat two was quicker. The all-conquering duo of Oliver and Ryan took pole position with 36.50 laps. Peter and Jerome tied with the heat one winners – the two Pioneer Camaros separated only by Peter and Jerome’s superior fastest lap. Jean and Duncan took fifth overall with 34 laps. Oli and Terry’s Dadson Camaro came in seventh overall with 31 laps – Andy and Simon’s Javelin tying with Mike and Daniel, but having a better fast time.

Consolation Race. Mike and Matthew graciously offered to trial a step-up consolation race, which we would like to introduce next year. As sixth-place qualifiers, they’d start in pole-position. The Falcon stormed away at the start and never looked troubled. Simon and Andy tried to keep in contact, but ended up four laps back. The winners’ 19 laps in five minutes was sensational. Mike Mc and Steve finished third, a lap behind the Javelin – Oli and Terry were fourth.

Feature Race. Mike and Matthew joined the back of the grid and it was Mike’s quick start that caused a three-car crash even before they crossed the start line – Andy and Duncan also getting caught up in the mayhem. The race started with rain and a wet track – RCS64 forecasting overcast weather and a drying damp track through the race. Everyone started on Wet tyres, some guzzling more fuel than others. Duncan stayed out to hold the lead, Andy also driving economically to hold third place – Peter leading the group who had pitted, sitting second overall after two minutes of the race.

Coming up to the half way point and the driver change, both Duncan and Andy had got through with just one pit stop. However, it was Mike and the Falcon that had the lead – Duncan second, Ryan third, Peter fourth, Andy fifth and Dean sixth. Ryan and Oliver had made the brave decision to change early to Intermediate tyres on a still wet track. Everyone else was on Wets. It was Ryan and Oliver who had by far the best handover pit stop and they took the lead – Mike having to make some quick adjustments to the Falcon before Matthew took over, which dropped them back to fifth. The top five were covered by not much more than a lap.

With four minutes to go, it was neck-and-neck between Oliver, Jerome and Jean – although Jerome’s Camaro was really guzzling the gas. Everyone was now on Intermediates, apart from John who had stayed on Wets – still probably the best tyre choice for the conditions. Over the next few minutes, the pressure was on Oliver in the lead, closely followed by both Jean and Jerome. Going into the final ninety seconds, the whole field was covered by less than three laps, Alex charging up into fourth place. The tension was rising and Oliver had a few offs – some his fault, others not. Jean was closing in and took the lead as Oliver and Ryan’s Camaro sat in the pits for their fifth and final pit stop – it looked like Jean and Duncan would get to the end with just three stops. That was just forty seconds to go. An even later stop would cost Jerome and Peter third place – they dropped down to sixth at the end. Alex missed out on third too – a last lap splash and dash dropped him and Dean to fourth. That was how close this race was and how important fuel consumption was to the result.

As the chequered flag fell and the dust settled, Jean and Duncan had cruised to a well-deserved win by one lap over Oliver and Ryan. Matthew had driven superbly to drag the Falcon up to third place. Alex finished on the same lap, with John and Jerome finishing a lap back.

Huge congratulations to our winners – taking home the final WHO medals for a while. A very big thank you to all nineteen racers who came out in strange circumstances to give the club a suitable send-off into a period of hibernation. To all those who came along or stayed at home – take care, stay safe and keep in touch. We will start racing again when it is possible to do so. 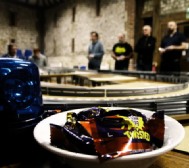 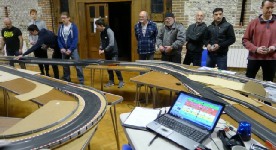 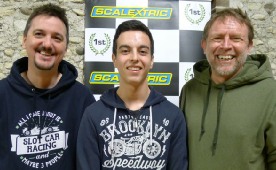 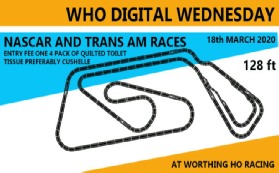 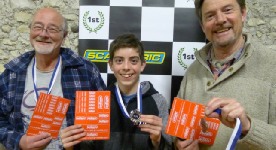 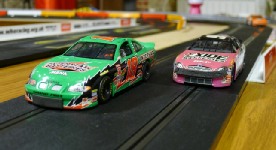 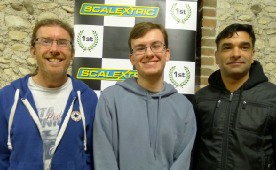 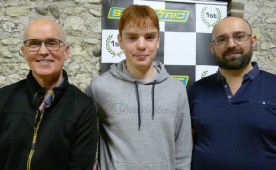 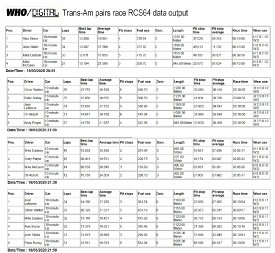 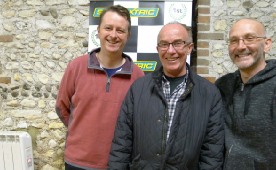 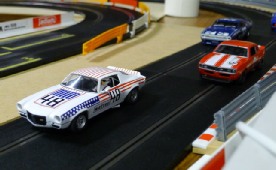 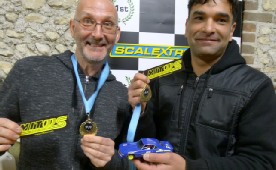 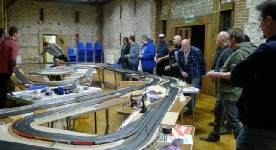 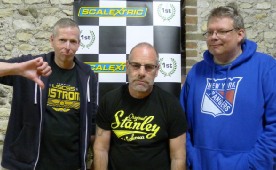 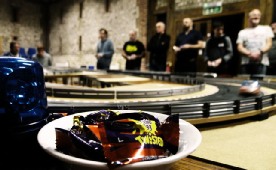