Our third WHO/digital Wednesday of the year saw twenty-two people take to the grid for a Nascar club car team race and a Trans-Am pairs race. The results, stats and some pictures are on the right, plus there’s a video over on YouTube.

Unbeknown to us when we set the 2019 calendar, our third WHO/digital evening of the year fell on both the Spring equinox and International Day of Happiness. Twenty-two races decided that some digital slot car racing was the way to celebrate and hoped they'd be going home extra happy with a winners medal.

We welcomed two racers for their first visits to the Barn - Rob's nephew Ralph and David's son Lawrence. It was the first time David had raced in a long time. After a busy practice session and a part scientific, part random team selection, we were ready to race...

Four teams of four and two teams of three lined up for the start of the Nascar club car team race. We'd have three 20 minute segments, totalling one hour of racing and a swap of cars after each race. The theory behind the seeded team selection is that we have more or less equal teams. The first twenty minutes suggested the theory had worked quite well, with the top four teams clocking up 66 laps on a fuel-simulation-only run. Daniel, Mike D, Dean and Rob A were the first to cross the line in the green Juicy Juice car, followed by Alex, Alex and Mike McCann in the red(-ish) Exide Ford Taurus.

We added the tyre simulation into the mix for the second 20 minutes, making those pit stops harder. Plus everyone had different cars to get used to. Lawrence, Simon, John and Matthew started in third place and drove the best race in the white Unity car, scoring 67 laps to take the lead overall. Daniel's team were second best, two laps adrift. Alex, Alex and Mike were a further two laps in arrears having given the yellow Jetson's car a good thrashing. Third in the segment were one of the strugglers from the first segment - Jerome, Graham, David and Steven. They had moved on from the Jetson's car to the lovely Exide Taurus and scored 66 laps. Ralph, Jean and Andy struggled the most - finishing last, but stayed in fourth - nine laps off the leaders.

Going into the final 20 minutes, the top five were covered by twelve laps. Ash, Terry, Peter and Rob D were way back in sixth, but they grabbed their best score of the evening - 67 laps - with the Unity Taurus to finish the race on a positive note. However, the segment did not start well for the race leaders - the Juicy Juice car died and required replacing. Luck is part of racing, but this slice of bad luck came at the worst possible time and cost them around three laps on the leaders - slightly less on their nearest rivals. They were soon back in action and hunting down the pack.

Out in the lead were Ralph, Andy and Jean with the Exide car. They led from start to finish, putting in an almost perfect 20 minutes and scoring a massive 71 laps - the highest score of the night. Behind them, Daniel's team had inherited the overall race lead and they only needed to stay ahead of Alex, Alex and Mike and at least two laps ahead of the recovering Lawrence, John, Simon and Matthew. That recovery faltered, leaving Daniel & co to breathe a big sigh of relief. As the chequered flag fell, the win, the medals and some Policar stickers were theirs.

That is only part of the story as the top four were covered by just four laps at the end of the hour - one of the closest team races we've ever seen at the Barn. Although credited with second on the night, a data-entry error was later corrected that dropped Lawrence, Simon, John and Matthew into third. It was Ralph, Jean and Andy who finished second, with Alex, Alex and Mike fourth.

Congratulations to our winners - Daniel, Dean, Rob and Mike. After team photos and the medal ceremony, we said goodbye to Ralph, Jerome, Peter and Daniel and swiftly moved on to a Trans-Am race - which featured nine pairs.

Four Chevys, three Fords and two AMC Javelins made up the March Trans-Am grid. Two 10-minute qualifying races, with a driver change at halfway, would set the grid for the feature race. The first heat saw Mike and Jean's Camaro score a massive 44.5 laps, five ahead of John and Alex's Chevy. Graham and Steve looked iffy on 38.5, but Terry and Rob A were really biting their nails with 37.5 laps on the scoreboard.

The second heat had five cars and only Alex and Dean's Pioneer Camaro managed a clean-ish run, scoring 40.5 laps to qualify second. Behind them, Matthew and Simon had the advantage at half distance, but they fell away allowing Ash and Andy's Javelin to slip through into second and finish with a score of 38 laps - giving them fifth best time. The nail-biting only got worse as Matthew and Simon tied on distance with Terry and Rob for the final place in the feature race. That would be decided by fastest lap - 10.502 for Terry's Javelin and 10.679 for Matthew's Camaro.

At least Matthew and Simon had the consolation of blitzing the other two non-qualifiers in the five-minute consolation race. However, they did almost throw it away at the end... Deciding not to splash & dash, it looked like they would run out of fuel and hand victory to Mike and Rob's Pioneer Mustang. However, Simon slowed right down and took the flag just moments after the five minutes were up - his quick thinking won the race. Lawrence and David were a close third in Mike D's Ford Falcon.

That just left the ten-minute feature race - rather more of a frantic sprint than last month and with weather thrown into the mix. After some contact off the line between Terry and Steve, Mike raced off into an early lead. Both Dean and Alex F were keeping Mike's white Chevy firmly in their sights, with Terry leading Ash in the AMC battle. The rain arrived on cue just before the driver change at half distance - everyone changing to wets apart from Alex S and Graham who chose Intermediates. Jean and Alex returned to the track on the same lap, with Rob and John two laps down, Andy a lap further back and Graham another lap adrift.

The battle for the win was relentless. Alex kept pace with Jean and started to close in, the Intermediates proving the better tyre. A big off for the white car let Alex's Camaro through with just over a minute to go. Jean was unable to respond due to a loose rear wheel, probably a result of the crash. Alex made sure of victory with a strong finish. Behind them, Rob brought Terry's Javelin to the line in an excellent third place - just ahead of a hard-charging Andy, who was fully-focused on keeping John's faster Camaro behind. All three finished on 37 laps, with Graham bringing the Mustang home in sixth, six laps behind the winners.

With a second medal of the night, Dean was top of the international happiness charts - although Alex was pretty delighted too. Twenty points for the win moved him up to equal third place in the Trans-Am championship table with just two rounds to go in May and July.

A big thank you to everyone who took part in the racing and made it such an enjoyable evening. Special thanks go to the set-up team, race control duo and to all those who stayed behind to pack away. The hall was clear just after ten, so a great effort! A massive thanks to Mike, as always, for the loan of his amazing Scalextric digital kit, without which we wouldn't be having so much fun. We'll do it all again on Wednesday 22 May. 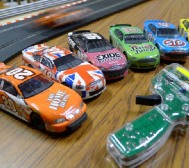 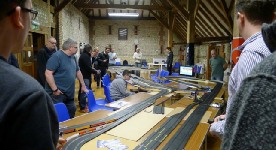 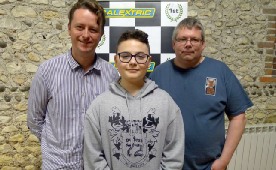 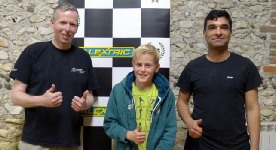 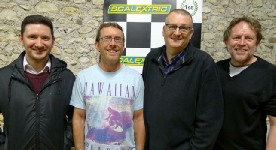 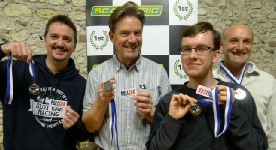 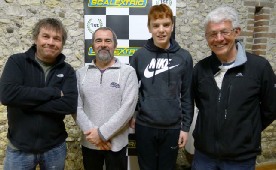 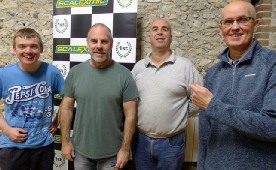 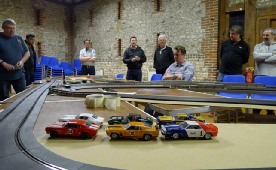 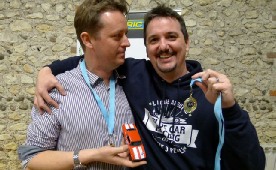 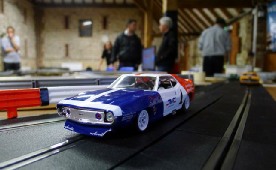 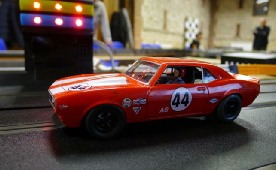