Simon had designed us another monster track that filled up most of the Barn for an evening of WHO digital racing on a foggy evening in Goring. And there would be a few notable firsts... Of the 23 racers, Ollie from South Downs Slot Car Club and Mike D's work colleague Jean were making their WHO debuts. WHO/digital went wireless for the first time - two of the latest Truspeed digital controllers were hooked up to the club's new Slot Car Solutions wireless receiver box. And, for the Goodwood Revival race, we'd introduce RCS64 - an even more feature-packed race management system we like very much. But more of that later.

After a breathless set-up session, digital driving school duties were shared around, with Neil taking digital newbies Steve, Oliver and Ryan under his wing. Meanwhile, the six young team captains drew their teammates names out of a hat, giving us five teams of four and one of three. Six Nascars were chosen, all the data punched into SSDC and we were off.

Three 20 minute segments made up the team race, with cars swapped each time - the winning team getting the sixth place car for the following segment, second getting fifth and so on. It was the team of three that rocketed into an early lead. The Three Furies - Corey, Keith and Graham - piled on the laps with the yellow Jetsons car, while the others tippy-toed around, still learning the track.

At the end of the first twenty minutes, the Furies had 81 laps, five ahead of Aiden's team - called "Corey Cut Me For No Reason" (disclaimer: no fatal injuries occurred, it was all just a misunderstanding) - and with "Cartastrophe" - Aaron, Duncan, Oliver and Terry - in third, another three laps back. Then came "Hubba Bubba Flubba Tubba", the "Bond Villans" and "Massa's Back Again". First to sixth were covered by twelve laps.

With cars swapped and team strategies tweaked, we were off again. This time the racing was incredibly close, with no-one getting away. The winners of the segment were CCMFNR, with Aiden, Steve, Neil and Andy driving the Tropicana car to 79 laps. The Hubba Bubbas, the Three Furies and the Massa's all tied for second place on 76 laps. The Bond Villans were on 75 and Cartastrophe had a catastrophe with a mere 70 laps. But it had been a pretty close twenty minutes of racing.

That left the Three Furies with a slender two lap lead over Aiden's CCMFNR - 157 to 155 laps. There was a seven lap gap back to the Hubba Bubbas - Alex, John, Deborah and Mike McCann moving up nicely to third place. Only five laps covered third to sixth place, so that would be a great battle going into the final segment.

The Furies had a real hunger about them at the start of the final twenty minutes and they were right back on form with the orange Home Depot Pontiac. Also right on it were Stephen's "Massa's Back Again", sharing the blue STP car. Those two battled it out for the lead and left the other teams in their wake. That was bad news for Aiden's CCMFNR and their chances of a race win. As Neil handed over to Andy for the final five minutes, the gap to the Furies was six laps on the road and eight laps overall. Up against Keith - last year's WHO/digital Nascar champ - Andy had no chance. In fact, Keith added another two laps to the Furies' winning margin. It was an impressive performance and a comprehensive win for the trio, racking up 240 laps overall.

CCMFNR hung on to claim second place, but the big story was the rise and rise of "Massa's Back Again". Stephen, Mike D, Ollie and Jamie recovered from a flaccid first segment to end up three laps off the runners-up spot. That final run of 82 laps (just a lap behind the Furies) was one of just three eighty-plus scores. Top job. It was the Hubba Bubbas who were knocked back from third, finishing two laps back. The Bond Villans - Jonathon, Jean, Ryan and Simon - finished on 220 laps, having some consistent but not earth-shattering scores for their fifth place. Bringing up the rear (someone has to do it) were Cartastrophe. After an excellent first twenty minutes, they then successfully lived up to their team name...

After a big round of applause and some nice shiny medals for our winners, plus team photographs for the also-rans, it was on to the second race of the night - Goodwood Revival.

This next stage of the evening saw the introduction of RCS64, an all-singing, all-dancing race management system with the potential to do fuel, tyres, brakes, weather, damage and probably half a dozen things we haven't discovered yet. This was the first time we'd run RCS64 at the Barn or on a big track and, with plenty of warnings about a late finish, we were expecting a select bunch of guinea pigs. Instead we had the biggest ever Goodwood field - ten cars and twenty racers.

We tried to make it simple, by eliminating everything except tyres from the equation, but even that was a lot to take on board in the limited amount of time. It was only an introduction - both for the drivers and for race control.

RCS64 has a different race screen and a pit stop menu to toggle through, rather than just hitting the refuel button in SSDC. So there was plenty to learn and re-learn during the practice session and the races. Added to that was the additional information to digest - tyre wear, weather conditions, track temperature and dampness and (I think) brake wear. All this has an impact on the car's behaviour - the wrong tyres mean the car does not stop and is almost un-drivable.

The two ten-minute qualifying races started with damp tracks and deteriorating weather, making the driving conditions tricky for everyone. It was a hard ten minutes in each of the heats, the first group setting better scores with Jean and Jonathon taking pole position with their '69 Maurice Carter Camaro. They pipped Mike D and Graham's 1970 SCA Camaro by just a quarter of a lap, with Neil and Corey's Shelby Mustang a further three laps back. All three pairs had topped thirty laps. Only one pair in the second heat matched that score - Andy and Ollie's '69 Al's Body Shop Camaro scoring exactly thirty laps. Then it was a nail biting wait for the rest to find out who'd fill the final two places in the feature race. Two GT40s made the cut - Simon and Duncan, plus Jamie and Aaron - both pairs scoring 28.25 laps.

With a ten o'clock finish looming, a few racers headed home through the thickening fog. One of those was Ollie, who was replaced in Andy's Camaro by Aiden. Otherwise, the line-up for the fifteen-minute feature race was the same. The race started with a damp but drying track, the drivers starting on either wet or intermediate tyres. It looked like the wets were the best choice as Graham, Jonathon and Simon set the early pace. The track continued to dry and the inters came into their own. Aiden picked up a second pair and was keeping pace with Simon in a battle for third.

Having qualified third, disaster struck for Corey and Neil. A rear hub came loose on their on-loan Pioneer Mustang and they were forced to limp round before retiring. Aaron and Jamie inherited fifth place, but their pit work wasn't quite slick enough to keep up with the two pairs ahead of them. However, up front, well ahead of the chasing pack, a great battle was going on between Jonathon and Graham.

Graham was driving the SCA Camaro very well, going from wets to inters at the right time, but failing to shake off Jonathon's '69 Camaro. The youngster had gone for a more aggressive switch - from wets to hard compound tyres - and it seemed to be paying off as Graham's inters quickly wore out on the rapidly drying track. When Graham handed over to Mike D and Jonathan to Jean, the two pairs were neck-and-neck.

Mike D certainly knows how to win Goodwood Revival races, but Jean was determined to take home a winner's medal on his WHO debut. The Frenchman drove hard, but a strategy of taking fresher tyres didn't quite pay off, despite some very slick pit stops. In the end, Mike and Graham took the win by just over a lap. They also claimed the fastest lap, just over a tenth of a second quicker that Jean and Jonathon.

Aiden's excellent drive set up Andy to bring home third place ahead of Duncan and Simon, despite some very sloppy pit stops by the Camaro's owner. An extra thirty seconds in the pits could have cost them that third place, but they just got away with it. Aaron and Jamie were a further seven laps back.

Congratulations to our winners, especially to Graham on his impressive 'double'. Big thanks to everyone who gave RCS64 a go - you were our guinea pigs - and thanks for all the feedback, both positive and negative. There are lots of things we've learned. Expect to see tweaks to hardware, software and formats when we use RCS64 again for the Goodwood race in May and for the afternoon of June's digital Saturday.

As always, our digital events would never get off the ground without Mike D's enthusiasm, vision and equipment. Nor would we have such big digital tracks without our committed crew of volunteers to set up and pack away. Thank you to all who helped out this time. 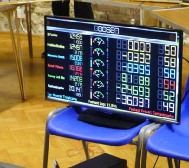 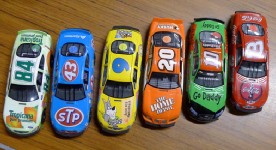 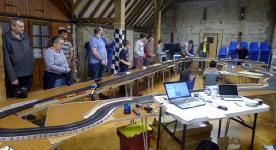 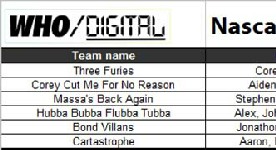 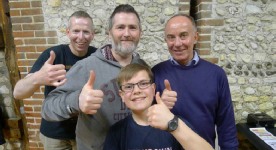 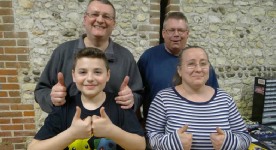 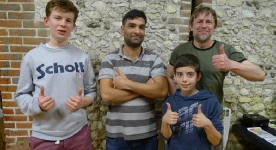 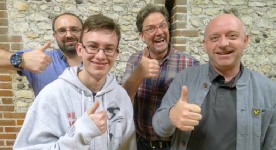 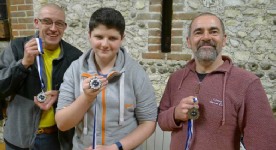 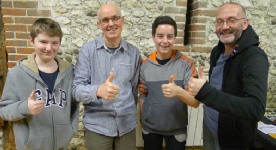 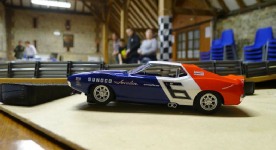 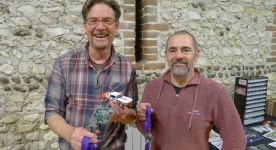 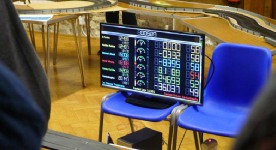 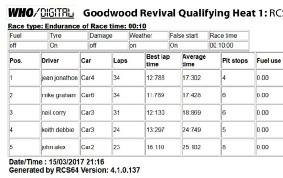 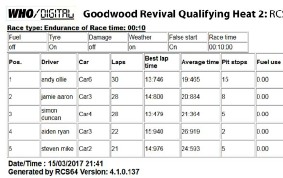 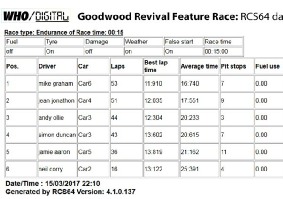