We've thoroughly enjoyed our digital racing over the past two years and we're gradually knocking the format into shape. This would be the first time we'd run two classes on one Wednesday evening, starting with a Nascar team race and closing with the Goodwood Revival pairs race.

Before all that happened, a six-strong team of setter-uppers got to grips with Mike's track plan. And, with a few tweaks on the three-lane section and to avoid the eighteenth-century timber posts, we had a working track by 6.30pm.

The Dadson digital driving school was busy, with Paul and Fernando new to digital and Chris, Freddy and Lewis making their first ever visit to the Barn. While the practice session drew to a close, the names for the Nascar teams were drawn from a hat. With twenty-one racers, we'd have three teams of four and three teams of three…

The race would be run in the usual WHO/digital format - three segments of twenty minutes and the cars swapped round each time.

It was clear from the start that the racing would be very close. Mike's design certainly favoured taking the correct line on the curved lane-changers and Simon's tweak to the three-lane section made the extra lane the quickest way round. So plenty to think about... And then there were the other cars to avoid, fuel stops to make and race strategy to perfect.

After the first twenty minutes it was Alex, Jamie and Neil - I Pug the Robotic Pug - who had a four lap gap back to the following pack, lead by Nature's Bakery on 74 laps, with Team Samba and Win it or Bin it level on 73 laps. Aubergine Racers, who looked very strong on paper, were another two laps back in a surprisingly lowly fifth place.

Of our digital rookies, three were in equal third place, Paul and Fernando with Team Samba and Lewis with Win it or Bin it. Freddy and Chris were bringing up the rear with Mike D in Team Speedy, but had learned plenty on that first stint.

In fact everyone had learned plenty. In the second segment, the pace stepped up and the marshals could relax just a little bit as the cars spent more time on track. The Aubergine Racers started to show their form and jumped up to third place on 158 laps, just one lap behind the Pugs and two behind the new leaders, Nature's Bakery - Aaron, Keith, Debra and Duncan.

Behind these top three teams a small gap had opened up. Team Samba - Fernando, Andy, Daniel and Paul - were on 153 laps, Win it or Bin it - Lewis, Stephen and Mike Mc - looked more like binning it than winning it and were on 150 laps. Although still sixth, Team Speedy added seven laps to their previous score and were just nine laps off fifth.

Going into the final segment, our top three were covered by just two laps. It was anybody's race...

The Aubergine Racers - Corey, Darren, Simon and John - immediately showed their intent by pulling out a two lap lead over Nature's Bakery at the first driver change. That was enough to tie the race lead. That lead has eked out to four laps by half way, with the Pugs having briefly pulled themselves back into the mix. The Pugs would drop back, but the lead at the top remained the same going into the final five minutes. Keith for Nature's Bakery battled incredibly hard to reduce the deficit, but Darren defended resolutely for the Aubergines.

As the horn sounded for the end of the race, the Aubergines had put in an incredible 92 laps to finish on 250, just two laps ahead of Nature's Bakery. The Pugs were third, a further six laps back. The other places stayed as they were, none of Team Samba, Win it or Bin it or Team Speedy could match the relentless pace and high scores of the top three teams.

After Corey, Darren, Simon and John had received their medals, it was time to say goodbye to Chris, Freddy, Lewis and Darren. Then the horse-trading began for who would drive with who in the Goodwood Revival pairs race.

For the first time, there were more bring-your-own cars than Mike's loaners. Mike D had his all-conquering Ford Galaxie and Andy returned with his Camaro. Simon had a brand new Carrera Aston Martin DB5, Mike Mc had his shiny red Ford GT40, Daniel a Mercury Cougar and Stephen a little MGB. With two Ford Mustangs on loan, that gave us eight cars.

The six-minute qualifying heats would see two cars drop out. Up top, Mike D and Jamie qualified comfortably with 26 laps and the only sub 11 second fastest lap. Behind them were Mike Mc and John in the GT40 on 22 laps, Simon and Duncan in the DB5 on 21 laps, followed by two cars on 19 laps - Keith and Debra in the Pioneer Mustang, plus Daniel and Alex in the Cougar.

Then it got extremely tight for the final qualifying place... Andy and Fernando looked to be heading out, until Andy dragged them up to 17 laps and a tie with Neil and Corey in one of Mike's Mustangs. The tie-breaker for the heats is the best fastest lap, which favoured the Camaro by 11.9 seconds to the Mustang's 13.1. Behind them was the fast but flighty MGB of Stephen and Aaron.

All was not lost for the non-qualifying four. John and Alex had to head home, which left two places up for grabs. Mike Mc recruited Corey into his GT40 team and Daniel nabbed Aaron to drive the Cougar. Another change saw Keith and Debra swapping to one of Mike D's Camaros after the Mustang lost a wheel in the heat.

The ten minute feature race got off to a scrappy start with half the field crashing at the first corner. One of those to avoid the carnage was Jamie, taking first stint in the Galaxie. He would hand over to Mike with a lead of a couple of laps over the GT40. Sadly, Duncan's race never really started with the DB5 grinding to halt. Plenty of frantic pit work on the Aston would see it return to the track for a final flurry at the hands of Simon.

As Jamie took over from Mike D for the final five minutes, Mike Mc handed the GT40 over to Corey and Keith took charge of the orange Camaro from Debra. That would be the battle for the top three places, although Andy's charge up the field saw the blue Camaro close in to within a couple of laps.

In the end, Mike D had stretched the Galaxie's lead to five laps giving the big car an impressive hat-trick of wins. Behind, Keith just pipped Corey to second place - both finishing on 36 laps, but the Camaro headed the GT40 on the road. Fernando and Andy were delighted with fourth place and 34 laps, after the younger member of the pair had initially struggled with the faster car. Daniel brought the Cougar home in fifth, with Simon putting in some cracking laps in the repaired DB5. Sadly a short circuit wiped the fast times, so we're not sure quite how fast Simon was!

Huge congrats to all our winners tonight and thanks to everyone for taking part and making it such a competitive and fun evening. Special thanks to Mike D for putting on the show and to Simon, Duncan, Keith and Debra for helping set up and to everyone who stayed behind to pack away.

Despite a few glitches and brief interludes, we managed to run both classes in an evening, which is really exciting. We'll see if we can do it again next month, this time with a GT race starting off the action... 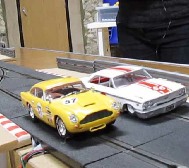 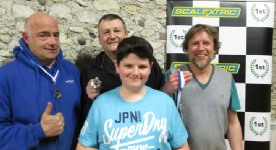 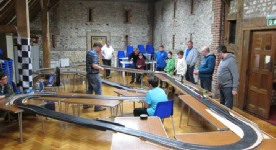 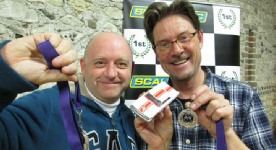 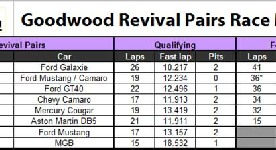 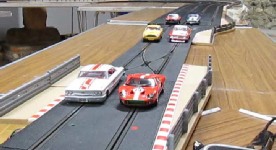 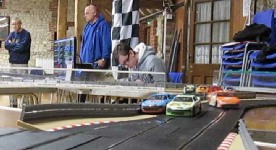 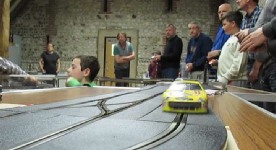 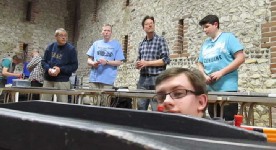 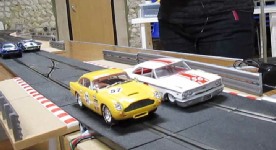 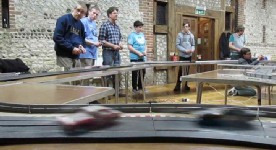 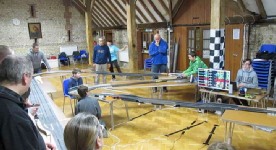 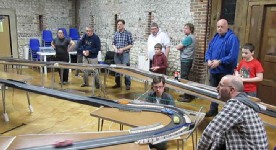