Mike designed an absolutely massive layout for our seventh WHO/digital event at the Barn. The track was a smidgen under one hundred feet long (or 30 metres, if you prefer), used up most of Mike's and the WHO/digital track stock, plus it had a bridge - a first for any WHO Racing event.

The construction process was an epic task, requiring many hands and agile minds - but cars were running at 6.30pm as racers started to arrive for practice. This was despite an unfortunate fluid spillage on the start/finish straight. Not to be recommended...

New to the track were six non-mag GT practice cars, set up with the same SSDC characteristics as the team race Nascars. They helped provide an even more helpful Dadson's Digital Driving School than ever before.

New on the digital grid was Hayley - finally racing at WHO after too many visits to the Barn as a spectator! Everyone else had tried out SSDC racing, although Andrew, Ben and Nathaniel's rather brief experience was at the Scalextric World Championship event back before Christmas.

We had decided to play with SSDC race management system a little more - decreasing the speed of cars when they are full of fuel and increasing the overall top speed a little for a track that had some nice big straights.

First though, we drew names out of Alan's hat and divided our nineteen racers into five teams of three and one team of four. The four would be a race control team including both Andy and Mike, with Ewan and Barry taking most of the driving responsibility. They'd be 'Scumbag College'.

There's be another father-son pairing in 'Clash of Cars', with John and Alex being joined by Simon.  Deborah and Keith ended up together in 'Turbo Thundercats' along with Nathaniel. The 'Hillman Imps' of Richard, Alan and Tony certainly had experience on their side and contained two of January's winners.

Our last two teams were 'In It To Win It' - that was Ben, Neil and Ash - and Corey, Andrew and Hayley made up 'I Don't Know', who's refreshing honesty allowed us to get on with the racing...

With teams of three, we ran five fifteen minute segments, each driver having five minutes each time. The Scumbags, with a team of four, saw Andy and Mike alternating on the final stints, Mike running the first, third and last races.

As always, the first segment saw all the teams and drivers finding their feet, easing into the rhythm of fuel stops and driver changes and getting used to driving in racing conditions, where there's more pressure than in practice.

Penalties were ready to be dished out, but only four were awarded throughout the first fifteen minutes, two of those right at the end. The Scumbags came out on top, just one lap ahead of the Imps, with Clash of Cars and In It To Win It tied for third just one lap further back and the Turbo Thundercats one lap behind them. The I Don't Know trio were five laps adrift, which hopefully would be retrievable...

Mike had certainly served up a very different track. It had four big straights and wide, sweeping corners in between. On previous tracks a smooth, fuel-conserving driving-style was often the way to go. This time, it was looking as if fast, aggressive driving might just pay off, despite the increased fuel consumption. Use of KERS would also be a factor on those straights.

In this second segment, the Imps were one of the smoother driving teams and they came second, finishing on the same number of laps as hard-driving Crash of Cars, but just behind them on the road. Behind the leaders, the Turbo Thundercats finished two laps back, with In It To Win It a further lap down and I Don't Know and Scumbag College six laps off the pace. The Scumbags had a torrid time with over-ambitious pit lane entry speeds...

After half an hour's racing, we had the Imps leading Clash of Cars by just one lap. In fact, the top five were covered by just five laps. Team I Don't Know had a lot to do back in sixth. One problem was that they were picking up the bulk of the penalties.

The start of this fifteen minutes was heart-in-mouth stuff as all the drivers drove full-pelt in close formation. Some skilled over-taking and bump-drafting without actual contact meant there were surprisingly few penalties during that five minutes. However, there were more than a few offs and rolls.

Things calmed down a little for the middle stint, but it was pedal to the metal to round off this third race. Scores were down a little over segment two, although In It To Win It set there best score of the night to finish first, a lap ahead of the Scumbags, two ahead of the Imps and Clash of Cars and five ahead of I Don't Know and the Thundercats.

There's no doubt that the six Nascars we use for our team races each have their own characteristics and quirks. Some love just ask to be driven hard, like the red Coca Cola Ford Taurus, while others - especially the orange Home Depot Pontiac - goes best when stroked round the track. Getting the best out of each segment means adjusting your driving style to the car you end up with.

It was the Turbo Thundercats who did the business this time, driving the Coca Cola Taurus just hard enough to post the highest score of the night so far - 63 laps. Inevitably, it was incredibly close behind them - Clash of Cars on 62, the Imps and In It To Win It tied on 61 and the Scumbags on 60. Losing more ground were I Don't Know with 56 laps.

Going into the final fifteen, the leader board remained the same, but the Imps and Clash of Cars were now tied on 236 laps and In It To Win In just two laps behind...

The start of this segment was as frantic as the third had been, but exhibited significantly more skill. The pace was high, but the cars stayed on the track - everyone was going for it. Ewan was leading the way for Scumbags in the Yellow Jetsons Taurus. Although pitting early, the youngster held the lead when he re-emerged, with the other five teams battling it out a lap behind.

As we passed the first driver change, the race was starting to spread out. Scumbags held a comfortable lead, but nowhere near the five laps they'd need to draw level with the leaders. Following behind them were In it to Win It and Clash of Cars. Then followed the Imps, I Don't Know and the Thundercats.

Clash of Cars' only focus was on the Imps and things were looking good - two laps ahead after the first five minutes and a little more at half way. Taking over for the last stint of the race, Simon really put the hammer down for Clash of Cars and Tony wasn't able to respond for the Imps. The gap at the end was three laps and that would be the margin of victory.

The Scumbag's efforts in the last segment has meant they set the best score of the night, jumped In It To Win It by one lap, and finished just one lap behind the Imps. The Thundercats had clawed back some ground and were just two laps back in fifth - the top five teams were covered by just seven laps!

Coming home sixth were I Don't Know. Corey, Hayley and Andrew never gave up, setting their best score of the night - 60 laps - in that last segment. They were just fifteen laps adrift after 75 minutes, not a big gap under normal circumstances. And Hayley had really enjoyed herself, being part of the racing at last...

Huge congratulations to Alex, Simon and John on their win. Alex, as always, was a brilliant captain. Thanks to everyone who made it such a great night of Scalextric digital racing at the Barn, especially to those who gave their time setting up and/or packing away.

Our next WHO/digital event is a full day of racing - another SSDC Saturday - on 23 May. Expect another team race, a GT competition, a Goodwood Revival pairs race and maybe a few surprises. 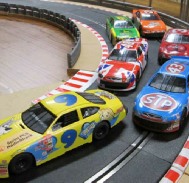 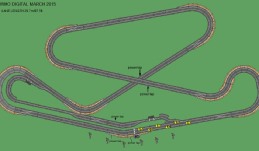 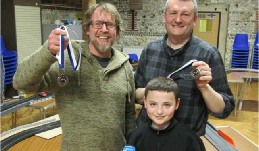 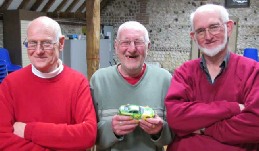 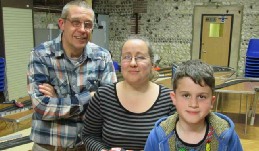 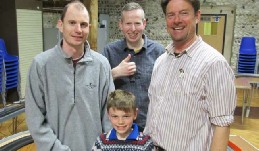 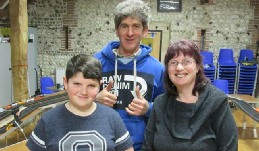 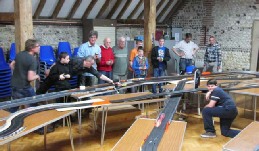 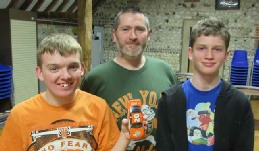 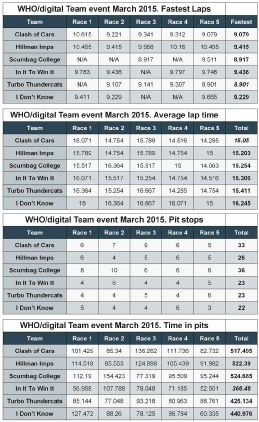 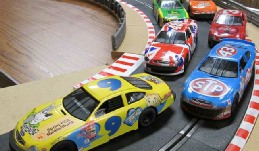 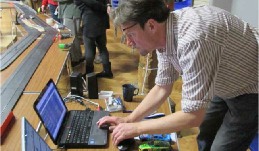 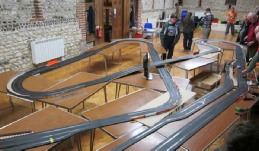