The evening’s results and some pictures are on the right, with more pictures via the Flickr button and final championship tables on the 2018 season page. Click the images to make them bigger. A video of some of the action is available via the YouTube button.

Twenty four is a perfect number of racers for our WHO/digital Wednesdays, giving us six teams of four in the Nascar team race and twelve pairs for the Trans-Am race. That's exactly what we had for the final Digital Wednesday of 2018, when the Nascar and Trans-Am titles would be decided.

Simon provided us with another eye-catching track which was wonderful for racing. Not one of our longest layouts at 91 feet, but a great combination of straights, wide-radius turns, technical sections and a clever pit lane design that minimised pit exit incidents.

The top six drivers in the championship were separated by just eight points, so we made sure they were all in different teams. As usual, it would be the juniors who captained their teams - Jonathon and Aiden were also championship contenders. Mike D picked a summery selection of yellow and green cars and, as a hum of anticipation settled over the Barn, we were ready to roll...

The race started with a false start for Alex's Shady & Speedy team. A Stop-Go penalty put them at the back of a very competitive field. We were only running the fuel simulation in this section of the race, so pit stops were quick and straightforward.

As we approached the end of the twenty minutes, two teams were out in front - Aiden's 'Two Eyes Good, Four Eyes Better' and Oliver's 'Famous Four' which included championship contender Simon. When the chequered flag fell, the Eyes had 65 laps and the Famous Four had 64, three laps ahead of Corey's Team in third. Ryan's 'Too Many Jeans' and Jonathon's 'The Four Lions' were on 60 laps and Shady & Speey finished on 59.

We added in the tyre wear simulation for the second stage, meaning that captains needed to concentrate a little more on their tactics and drivers had to keep their wits about them in the pits. Sometimes we've seen a dip in the second stage scores, but that wasn't the case this time.

The Four Lions - Jonathon, Jim, Andy and Steve - added five laps to their Stage One score to come home first and move up to third overall on 125 laps. Just behind them on the same lap were the Famous Four - Oliver, Simon, Matthew and Stephen - followed by the Eyes - Aiden, Alex S, Terry and Duncan - one lap behind. That left the Eyes and the Famous Four tied in the lead on 129 laps.

Too Many Jeans - Ryan, Ash, Jean and John - came home fourth in the stage and sat fourth overall, seven laps behind the leaders. Corey's Team - Corey, Neil, Graham and Rod - were fifth, with Shady & Speedy - Alex F, Mike D, Mike Mc and Brad - sixth after another 59 laps, eleven laps behind the leaders overall. So what did that all mean for the six championship contenders?

With just the final 20 minutes to go, the championship leader on the road was Aiden (Two Eyes...), who was one lap (and therefore one point) ahead of Simon (Famous Four), with Jonathon (Four Lions) three laps back from Aiden. Ash (Too Many Jeans) and Mike D (Shady & Speedy) were five laps adrift and Neil (Corey's team) eleven points back.

It's been pretty hot on the South Coast this past two months and we are all crying out for some rain. Thankfully, RCS64 came to the rescue and we set some random weather conditions for this final stage - starting sunny, clouding over and forecast for rain by the end of the race. It would be a close, tense and exciting twenty minutes.

The first half of the race saw the Eyes and Too Many Jeans pull out a lap lead over the Famous Four and the Four Lions. It was that close. Corey's Team and Shady & Speedy were just another couple of laps back. Rain started falling earlier than expected - well before half distance - and everyone changed to wet tyres for the damp track. Wet tyres last for ages in the rain, so pit stops would just be fuel stops.

Too Many Jeans seemed to have the upper hand in the second half of the race. They went a lap ahead of the Eyes, but that wasn't enough to win the race or hand Ash the championship. The Eyes and the Famous Four found themselves on the same lap and that was the battle for the overall race win and the championship. Whoever finished ahead on the track would win the race, but Simon needed his team to be more than a lap ahead of the Eyes to go home with individual honours...

At the final pit stops, the Eyes had a small advantage over the Famous Four, but both were still behind Too Many Jeans. The run to the chequered was tense, but when everything was done and dusted Ryan's Too Many Jeans won the stage, with the Eyes finishing half a lap ahead of the Famous Four in second and third. That gave Two Eyes Good, Four Eyes Better the overall race win and Aiden the Nascar championship. Simon was runner-up by just one point and Ash beat Jonathon by two points to fill the final place on the championship podium.

Well done to Aiden, Alex, Terry and Duncan for their race win and huge congrats to Aiden who becomes the first junior racer to win a WHO/digital championship. After all that excitement, there was still the Trans-Am race to look forward to.

This race was the final round of our inaugural Trans-Am championship. Mike D looked reasonably comfortable at the top of the table after two thumping wins in January and February, but he and Jean would need to successfully qualify for the feature race. It was the same for Corey, who looked good as top junior, but would also need a feature race appearance to make sure. With such a strong field, any slip-ups would be punished - only six of the twelve pairs would qualify.

The first ten-minute heat saw John & Alex on excellent form, having missed the last two digital races. They had a lead of a lap over Oliver & Ryan when pit stop woes dropped them back. They finished in fourth on 33.5 laps, exactly a lap behind Neil & Corey, Graham & Jim and Oliver & Ryan who all scored 34.5 laps. Simon & Duncan had fun with Simon's little Ford Falcon XY, but were two laps back. Another new car, Terry & Aiden's AMC Javelin was another two laps back. Both new cars will need development for next season.

The drivers in the second qualifying group knew what they needed to do, but were under enormous pressure after such a fast opening heat. Andy & Ash topped the list with 36 laps, just ahead of Alex and Jonathon. Mike D and Jean sweated in third place, crossing the line for 35 laps and qualifying for the feature race. The other three cars didn't. Mike & Stephen fell short by three laps. It also meant John & Alex had missed out.

John & Alex did start in pole position for the five minute consolation race. Mike & Stephen took the lead from the line and their Sunoco Camaro battled with John & Alex's Brut car for the entire race - the pole-sitters eventually winning by half a lap. Behind them Simon & Duncan brought the Falcon home third, with Brad & Rod fourth, just ahead of Terry & Aiden. Matthew and Steve were sixth.

All six pairs in the feature race were focused on the race win. The first lap was hectic, Jonathon quickest off the line with the Pioneer Camaro and then Ash coming together with the rest of the field just coming out of the technical section. Only Jonathon and Ryan's cars got through, giving them a decent early gap on the other four cars as they were returned to the track.

Ash soon worked himself up to third, then passed Ryan & Oliver's car for second and set his sights on Jonathon. Everyone was driving hard and the whole field was separated by less than two laps. The top two stopped last for their driver change, Alex rejoining half a lap ahead of Andy and a lap ahead of Graham & Jim's Mustang.

Alex and Andy threw everything at the win - Alex for a second Trans-Am victory in a row, Andy looking to fulfil the promise the Javelin has shown this season. Both were fast, but neither was error free - the Javelin took a trip to the floor which seemed to have ended Andy & Ash's chances and then Alex had a mix-up in the pits. It was the Camaro's final stop and needed fuel only. Alex blipped the throttle too soon, surprising himself as the car left the pits, probably without enough fuel to reach the end...

Meanwhile, Graham had brought the Mustang in for a splash and dash to ensure he'd get to the finish. He was driving fast and smoothly and not getting involved in the dogfight for the lead just ahead of him. Mike, Neil and Oliver were a couple of laps back from the leading car.

Marshals and spectators became transfixed with the battle for the lead, which closed up as Alex and Jonathon tried to figure out their fuel situation and Ash passed on the info to Andy so he could push as hard as possible. Both had small offs as the final seconds ran down. Then what we know is that Alex ran out of fuel on 36 laps, the Javelin slipped past and Andy & Ash celebrated. Then confusion set in as Graham's Mustang was also scored on 36 laps, but an extra half a lap ahead.

A stewards enquiry looked at the facts and what people thought had happened at the end. It was certainly possible that the Mustang had slipped through the chaos - the top three had been close, although everyone had been focusing on the battle between the Camaro and the Javelin. It was unlikely to be a software glitch - the Javelin looked to be too far into the lap not to have counted a final thirty-seventh lap. The scores stood - Graham & Jim's Mustang first, Ash & Andy's Javelin second and Alex & Jonathon's Camaro third. It was Graham & Jim's turn to celebrate.

A lap behind the top three, Mike & Jean came in fourth, giving Mike the Trans-Am championship on the final outing for the big blue Falcon XB. Neil & Corey were fifth, a few inches behind - Corey picked up the junior Trans-Am title. Just a few feet further back were Oliver & Ryan - all six cars covered by just over a lap and a half.

Congrats to Graham and Jim on their first Trans-Am win of the year and to Mike and Corey on their championship trophies. In the manufacturers' competition, Chevrolet beat Ford by 159 points despite Ford taking three race wins to Chevy's two. AMC were third in the table, Mercury fourth and Dodge fifth.

And that was the end of the evening. We'll need to wait until January for the next Digital Wednesday, but we do have all-day Saturday events in September, November and December - an awesome autumn of digital racing.

Huge thanks to everyone who came along and made it such an excellent digital evening. Special thanks go to the set-up and tear-down crews and to Stephen and Ryan who helped out on race control. We wouldn't be racing digital at the Barn without Mike's inspiration and the loan of his kit. Thank you Mike! 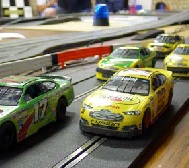 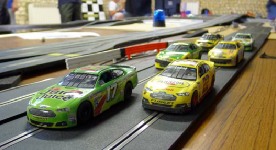 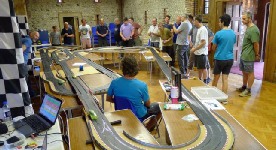 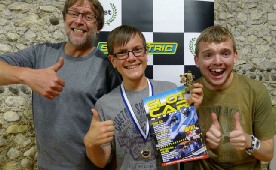 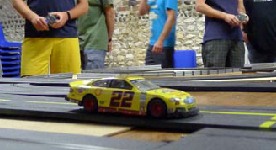 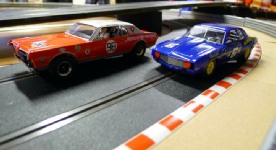 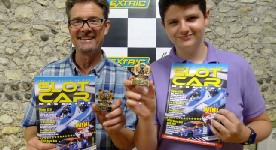 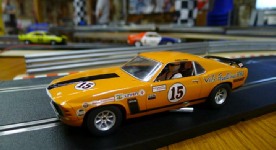 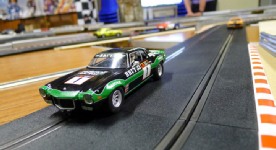 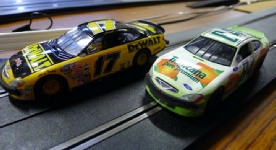 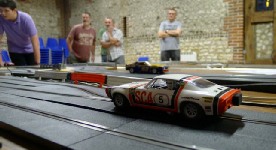 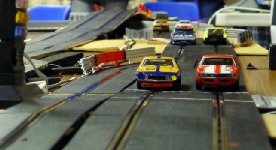 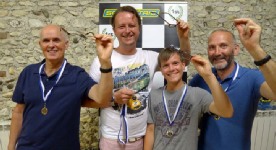 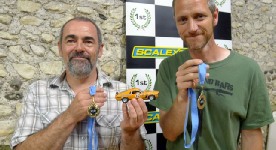 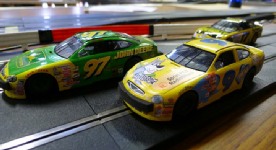 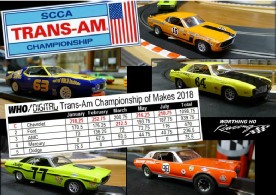