Summer has turned rather sultry and stormy down on the south coast. We got a nice breeze blowing through the Barn and an excellent twenty-two racers took to the WHO/digital grid for an evening of thrills and spills on another big Scalextric track. The well-oiled set-up crew put together Simon's latest creation in no time at all - everything up and running just after six o'clock.

That meant it was time to crank up the RCS64 race management software and give racers an early taste of the new features and pit-stop procedures that we'll all be getting used to. Those who'd come along to last month's Digital Saturday had a bit of a head start and it was great to see everyone sharing their tips and experiences to get everyone up to speed.

After some practice races and pit stops using the WHO/digital wreckers-yard fleet, it was on to the main race of the evening. Our inline Scalextric Nascars are the original WHO/digital cars and they are still going strong. For a change, the six cars were either green or yellow, giving some of the less frequently-run cars a chance to shine.

The six junior racers captained the teams and their team mates were selected randomly from two pools, the first made up of six seeded drivers. Our twenty-two racers formed four teams of four and two of three.

Race one was just ten minutes and none of the RCS64 features were turned on. It was a chance for a quick blast - to learn the circuit and to practice using the brake button on the Truspeed controllers, very necessary at the end of the main straight. It was Jonathon's team, the Wacky Racers, who lead the way with 37 laps, just ahead of four of the other five teams. Ryan's Rockets had failed to lift off, ending up a disastrous ten laps adrift - hopefully they'd learned enough to make progress.

Cars were swapped and fuel consumption turned on for race two, this time a twenty-minute marathon. The cars were thirsty, so there were plenty of opportunities to get the hang of the pit stops! Corey, Duncan and Neil - Team 'Tell Him Something' - were driving great and pitting perfectly. That gave them the race two win, with a massive 73 laps. Alex, John, Graham and Terry - 'Wheel Probably Win' - were just three laps back, just ahead of the 'East Coast Alliance' of Oliver, Mike D and Stephen. And those were our top three overall.

Race three saw fuel stops replaced by tyre stops - a slightly more complex menu with the choice of soft and hard compounds and with tyre wear coming into play. It looked like racers were getting the hang of things... four teams - Wacky Racers, Wheel Probably Win, East Coast Alliance and Tell Him Something - all finishing within a lap of each other. Ryan's Rockets were most certainly recovering, just six laps back and threatening 'AAA & Mike' (that's Aiden, Ash, Andy and Mike McCann) for fifth place.

The final twenty minutes - race four - was the culmination of the RCS64 learning process for tonight and saw both fuel consumption and tyre wear in operation. Most were finding the pit stop menu more familiar by now, but it does require time and patience to get right and, most importantly, not to panic! It was only AAA & Mike whose scores were failing to go forward and they slipped to sixth place overall. More practice is obviously needed... Their score of 56 laps was rather eclipsed by the 68-lap scores of Wacky Racers and Ryan's Rockets, the 69 laps of East Coast Alliance and Wheel Probably Win and by the race-winning score of 72 laps put in by Tell Him Something.

The margin of the overall race win was six laps, but the gap between second and third was less than thirty centimetres - East Coast Alliance just finishing ahead of Wheel Probably Win. Wacky Racers were a further six laps back. After losing Keith half way through the evening, Jonathon, Jean and Deborah put together a great performance. Ryan's Rockets - Ryan, Simon, Steve and digital-newbie Matthew - recovered superbly from their dodgy first race to end up fifth. All-in-all, a very enjoyable and exciting seventy minutes of racing and a great way to learn the new race management system.

We still had time for a Goodwood Revival pairs race. Despite a few departures to be ready for school and work tomorrow, we were left with eight pairs and two qualifying heats to see who'd go through to the six-car feature race. RCS64 was set up with fuel and tyres, just like we'd finished the Nascar race.

The first heat was an all Trans-Am affair - two '69 Camaros, a '67 Notchback Mustang and a Mercury Cougar made up the grid. Lessons were still being learned... Matthew jumped the start and had failed to 'wake' his controller, but he put that all behind him and drove well, although he and Andy would finish fourth after Andy completely messed up a late pit stop. It was John and Alex who drove their sumptuous Pioneer Mustang to a huge 40.50 laps. Jean and Aiden booked a place in the feature race for Jean's lovely new Camaro. And Stephen remained optimistic, having finished not far behind with his Cougar, assisted by Mike D after Jonathon had been whisked off home.

The second heat was mostly sports cars - two GT40s, a Ferrari 330 P3 and a lone Trans-Am 1970 Chevy Camaro. Jean kindly loaned the Walker brothers his GT40 MkII. After a few early difficulties, Oliver and Ryan drove it well, but their 25 laps put them bottom of the pile. Mike McCann and Steve drove Mike's MkI GT40 and were looking to beat Andy and Matthew's score to qualify for the feature race. They missed out by just under four laps and were eliminated alongside Oliver and Ryan. Up front, there was a right old battle between the yellow Ferrari of Simon and Duncan and the orange Camaro of Mike D and Graham that has dominated our Goodwood class in 2017. At the end of ten minutes, it was the Ferrari that took the spoils by just a few metres, both cars ending up on 40.75 laps, just a fraction ahead of John and Alex's score in heat one.

The feature race was an exciting ten-minute sprint. Mike and Graham had their 100% success record to defend and they took the early lead. Simon and Duncan threw everything at them, but could not prise the top spot away. The gap stayed around a lap, the Ferrari pair trying to stretch the time between pit stops, but to no avail. Behind, John and Alex were charging hard, but a loose wheel dropped them down the field while repairs were made. That allowed Matthew and Andy to move up to third, where they battled with Jean and Aiden. Stephen was now accompanied by Oliver in the Cougar, both driving impressively and attempting to fend off the recovering Mustang. As the clock ticked down, the excitement ramped up. As the chequered flag fell, Mike and Graham took their fourth Wednesday night pairs win of the year, although Simon and Duncan had run them very close. Jean and Aiden pipped Matthew and Andy to third and John and Alex just slipped through to beat Stephen and Oliver. There'd been some magnificent duels and plenty of great Goodwood racing to end of a very enjoyable evening.

Congratulations to our winners - Corey, Neil, Duncan, Mike D and Graham. And thank you to everyone who took part. Absolutely huge thanks go to the set-up team and to all those who stayed late to pack away. Finally, we couldn't do WHO/digital without Mike D's generosity, lending us his superb kit. Next up is a Digital Saturday in September where we'll have a full day of racing and some very exciting plans to announce for 2018... but more on that later. 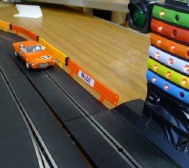 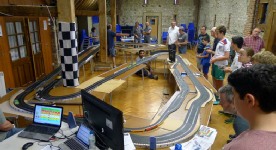 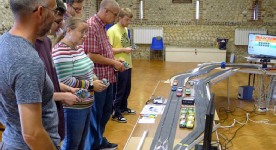 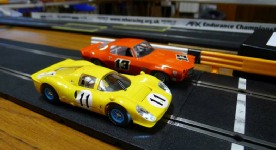 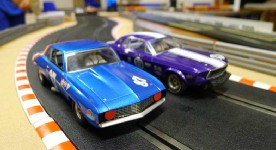 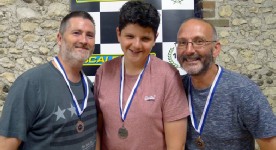 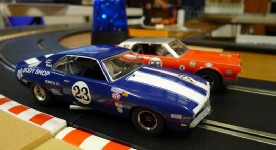 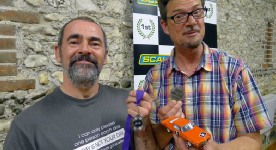 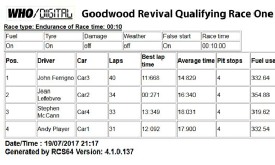 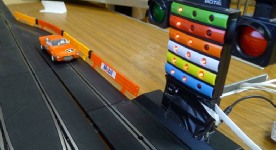 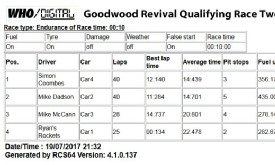 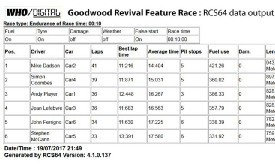