Our first WHO/digital Wednesday of 2018 followed on from our last one in November - a huge field of 30 for the Nascar team race and a healthy grid of eleven pairs for the debut of the new Trans-Am class. The results and some pictures on the right, with more pictures over on Flickr and a video on YouTube.

Our biggest year of digital racing started with a huge grid of thirty racers for the Nascar club car team race. We welcomed 1/32 racers Andy, Dean, Jim, Ben and Thomas for their first visits to the Barn. There were also a few more racers using the RCS64 race management programme for the first time, so Mike's Dadson Digital Driving School was pretty busy.

As Mike gave the driver briefing, Andy put together six teams of five racers - six junior captains paired with the top six racers from last year's Nascar championship, plus three other team mates chosen randomly. Then we were ready to race.

Our Nascar club car team race is the original WHO/digital format and it works very well. An hour of racing is broken up into three twenty-minute segments, with teams running a different car in each. In-race driver changes take place in the pits every four minutes.

Simon's track looked good on paper and it was even better to drive. There was a fast loop round the outside and a superb technical section in the infield. It flowed perfectly, allowing plenty of options to overtake and made the pit entry and exit easy and incident-free.

We set up RCS64 with just the fuel burn simulation to ease people in to the first twenty minutes. The fuel tanks weren't big enough to stretch the four minutes between driver changes, so there was immediately strategy at play. Team captains had to be on the ball, talking to their drivers, helping those new to RCS64 and keeping a very close eye on fuel levels.

At the end of that first twenty minutes, we had two teams tied for first place - Oliver's Jammie Dodgers and Ryan's Racers both on 66 laps. Two laps behind were Jerome's Gold & Silver Tops. On 62 laps were Jonathon's Team, just one lap ahead of fifth place The Hive Mind. Corey's Team - Don't 'Ave One - had struggled to reach 57 laps, despite being full of experienced WHO/digital racers...

The tyre wear simulation was added for the second twenty minutes. Racers and team captains would now have two simulations to think about and would need to monitor the use of both fuel and tyres. Less experienced racers would be dealing with a more complex pit stop menu. Communication within the team would be key.

Some teams faltered, Ryan's Racers dropping five laps on their earlier score. The Jammie Dodgers and The Hive Mind also came in short of their first segment scores. There were also some big improvements... Don't 'Ave One added a huge eight laps to finish on 65 - the same as Gold & Silver Tops - but it was Jonathon's team that smashed out 67 laps with the blue car to win the segment. That would be the best score of the night and put them equal first overall with the Jammie Dodgers and the Gold & Silver Tops on 129 laps.

I'm not sure we've ever had a three-way tie going in to the final segment, but we had fifteen pumped-up drivers determined to win - and Ryan's five Racers just two laps back in fourth...

Talk about tense and full-on racing! All six teams were fully-focussed on that final twenty minutes. The pit stops were getting slicker and the communication getting better. With the pressure on the leaders, errors were bound to creep in on the track and in the pits. It was the leading trio of the Jammie Dodgers, Jonathon's Team and the Gold & Silver Tops who ran out front. The JDs - Oliver, Matthew, Neil, Ash and Jim - held the advantage, but it wasn't a comfortable lead.

The final round of pits stops left the Jammie Dodgers a lap and a half ahead of Jonathon's Team and Gold & Silver Tops - who were still locked together. As the clock ticked down, premature celebrations seemed to have tempted fate as the JD's car crashed in the final corner and panic swept through the Jammie Dodger camp... But Neil stayed cool - he knew they'd won - even though he never got that final extra lap.

The final scores were as close as we've seen in a WHO/digital team race - although we've had some very tight two-way finishes. Oliver grabbed his first digital team race win as captain and Jim picked up a very well-deserved WHO medal on debut. Ash, Neil and Matthew need to start thinking about building trophy cabinets... Just a lap back, Jonathon's Team just pipped Jerome's Gold & Silver Tops by around half a lap. Congrats to Andy D for an excellent second place on his first WHO/digital appearance.

Dean and Ben also did a great job on debut, finishing four laps behind the winners with Ryan, Graham and John. Don't 'Ave One recovered from their appalling start to finish just eight laps behind the winners. Somebody has to finish last and this time it was The Hive Mind - no real disasters, they were just a few laps off the pace in a very competitive race. With three of the team using RCS64 for the first time, it was a good effort and plenty learned for next time.

After the traditional medal celebration and team photographs, we presented trophies and certificates to the 2017 WHO/digital class champions and top juniors, plus the second and third place racers. It was Mike D, Aiden, Jonathon and Andy who took home the shiny plasticware - congratulations to them all.

Although it'll take a while for some of us to stop calling the Digital Wednesday pairs race 'Goodwood Revival', this was the first running of our new Trans-Am class. Based entirely around the Scalextric and Pioneer DPR Trans-Am and Aussie Saloon cars of the late 60s and 1970s, it was a fabulous-looking field of eleven cars and twenty-two drivers.

We'd tweaked the format slightly, but the basis was still two ten-minute qualifying races and a ten-minute feature race. The additions were a one-minute practice before each qualifying heat and a five-minute consolation race for the cars who didn't make the cut.

The first heat saw two Dodge Challengers, a Scalextric Mustang Boss and three Camaros - one Pioneer '68 model, one Scalextric 1968 Penske car and John and Alex's 1970 Brut car. After a very rapid race, it was the Ford that took the chequered flag, Graham and Jim beating John and Alex by exactly one lap - 37 to 36.

With just five cars in the second heat, the winners would qualify, but everyone else would have to wait nervously for the results of the second race. Ben and Thomas were a couple of laps back with Graham's loaned Penske Camaro. Simon and Jonathon were looking precarious in the wonderful lime green Posey Challenger, just ahead of Alex and Terry's Pioneer Camaro. Andy D and Dean's Dodge was back on 28.5 laps.

Mike D and Jean blitzed the second the heat and finished with a huge 40 laps, Mike's Ford Falcon was big, but fast and looked a lot of fun to drive. Neil and Corey's brand new '69 Camaro also looked pretty handy, coming home with 36.5 laps and slotting in to third place in the qualifying order. Andy P's new Javelin finished third in the heat and fifth in the qualifying order, sharing with Simon A - the Brighton & Hove duo finding the inline Trans-Am extremely quick, but not as well planted as the bigger, heavier sidewinder cars. Just behind came Aiden and Terry P, driving Andy's Camaro. They took the final qualifying place.

Daniel and Mike McCann finished fifth in their '69 Penske Camaro and would join four pairs from the first heat in the consolation race. A five minute sprint, with a driver change at half way, it was a cracking race. With two minutes left, the three leading cars were on the same lap, Jonathon and Simon holding a small advantage until Simon ran out of fuel and fell back to fourth. That let the two Penske Camaros get through, with Mike and Daniel just beating Ben and Thomas at the end. Andy D and Dean weren't far behind - they'd swapped the Challenger for a Pioneer Mustang Notchback. Alex and Terry had car troubles, spent time off track for repairs and came in fifth.

The feature race lined up with Mike and Jean's Falcon the clear favourite. A start line crash held up the Camaros of Terry and Corey, both of whom would need a lap added at the end. Jean was out in the lead, but the racing was very close - Jim's Mustang, Simon's Javelin and Alex's Brut Camaro were all less than half a lap behind. Corey was quickly making up for lost time and Terry was pushing hard too. The first round of pit stops mixed up the order a little and a few errors crept in, Jean stretching his lead out to just over half a lap ahead of Alex, Jim, Simon and Corey - although with the extra lap, Corey was now right up with the chasing pack.

The injection of adrenaline following the driver change saw plenty of crashes, including Neil's Camaro left spinning on its roof as Ash valiantly marshalled cars right, left and centre. Mike had the lead with the Falcon and it was now John who was pushing hard to keep in touch and close the gap. The scoreboard showed Neil a lap further back than he really was, but his was also on a mission and started to claw back ground on the two leaders. Graham's Mustang was jumped by Andy's Javelin, thanks to some pit stop strategy that put the little inline car up into second place.

As we moved into the final minute, Andy's tyres gave up and he was forced to make an unscheduled stop, dropping him behind John and Neil, but still on the same lap and on soft tyres. That turned into a frantic battle for the runner-up spot, with some late comings-together determining the finishing order. Mike had pulled out a three lap winning margin, but second to fourth were covered by just over half a lap - John and Alex bring the Brut Camaro home in second on 38 laps, Neil and Corey (with their added lap) on 37.75 and Simon and Andy on 37.50.

Graham and Jim's Mustang had faded from the early strong position to finish fifth on 36.25 laps, but did get the fastest lap of the race. Aiden and Terry were sixth on 34.50, probably a little disappointed not to push on from an excellent qualifying performance. In the new constructors competition, Chevy beat Ford, Dodge and AMC - based on the top three finishes for each manufacturer. All in all, a pretty excellent first Trans-Am race...

Huge congratulations to all our winners and a big thank you to everyone who came along and made it such a great start to the 2018 WHO/digital season. Special thanks goes to Simon for his superb track design, Daniel for his excellent work on race control and to all those who came early to set up and stayed late to pack away. Of course, we couldn't even think about racing digital at the Barn without Mike D's inspiration and loan of his amazing kit.

The next WHO/digital race is another Digital Wednesday on 21 February. 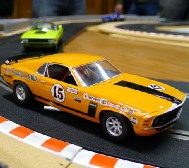 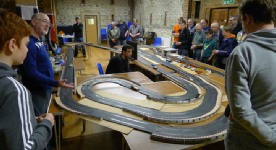 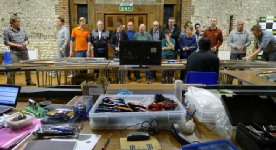 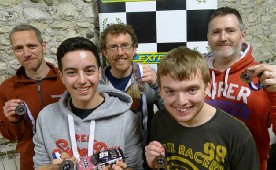 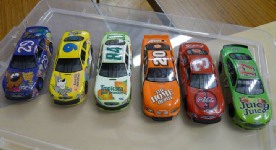 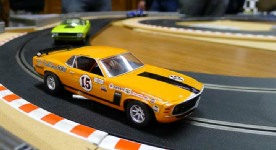 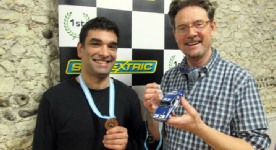 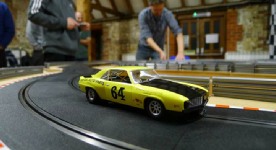 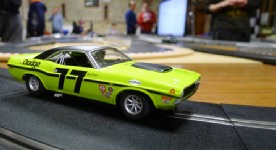 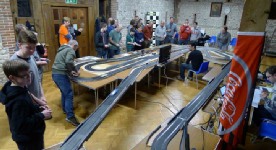 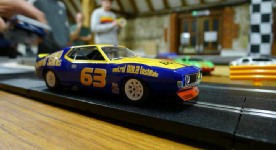 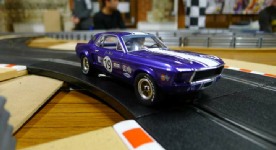 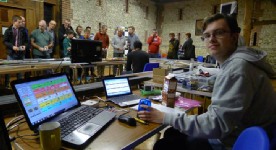 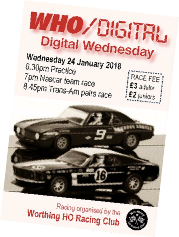 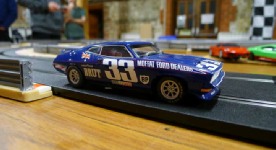