With the temperatures a bit parky on the south coast, twenty intrepid souls gathered at the Barn to complain about the weather and race some Scalextric digital cars.

We welcomed Simon, Graham and Terry for their WHO debuts. The latter two had returned after earlier visits to 'have a look' - they obviously liked what they saw. Simon is yet another RC racer trying out slot cars during the winter off-season. He follows in some illustrious footsteps.

Mike had designed us a layout that was both aesthetically-pleasing and wonderfully smooth to drive. A couple of long straights would be good for the little bit of KERS we gave the GT cars. One final debutant was the new TruSpeed SSD IV digital controller, which would be our green controller all evening for evaluation purposes…

The field of twenty was the largest we'd had for the full GT rotation, meaning that there'd be twenty races with every driver spending four minutes racing each of the GT club cars. As the action began, it looked like 16 laps would be a good score, 17 very good and 18 excellent.

Jonathon, our junior GT winner from December, was the first to finish his six races. After a slow-ish start, he'd come tantalisingly close to a couple of 17s, but then blew us all away with a perfect four minute run and scraped over the line to score 19 laps - the best of the night and left him with a total of 96.75 laps.

Keith soon beat that, having recovered from a huge slice of bad luck in his first race. He ended just a quarter of a lap off 100 laps, a barrier that was broken in the next race as Mike D finished his six races on 102 laps. Neil and Simon C both just failed to better that score, ending on 101.25 and 101 laps.

Meanwhile, Andy had made an extremely strong start with two eighteens, followed by two seventeens and another eighteen. That left him needing just 15 laps from his final four minutes. A tricky start saw him struggling and more than a bit worried. On just seven laps at half way, Andy pulled himself together and ended two and three-quarter laps ahead of Mike D.

That was that for the overall win, but the battle for the junior medal went to the final race of the twenty. Jonathon had been biting his nails for most of the evening as he watched and waited to see if Aiden, Vlad or Corey could beat his score. When it came down to that last race, Corey needed 18 laps to win, 17.75 laps to tie. We all know how cool Corey is under pressure and he gave us a magnificent drive, scoring 17.50 laps. So close, but the medal went to Jonathon.

It had been an enthralling GT race that had taken our full allotted time. However, once we'd said goodbye to those who had to get home to bed, there was just time for a Goodwood Revival pairs race. With seven pairs, we had two quick-fire five-minute qualifying heats which saw Mike and Daniel's GT40 eliminated, falling short by just over a lap.

The feature race was a ten minute scramble for the silverware. Pole-sitter Graham lead the way with Mike D's 1970 Chevy Camaro, although Simon C was driving his yellow Ferrari 330P4 like a man-possessed. He managed to stay in touch with the leader, but as Graham handed over to Mike D, Duncan had it all to do with the Ferrari. Both Mike and Duncan were throwing their cars around the track in sensational fashion - it was a spectacular race to the line. The lead was comfortable, but they didn't care. It was quite a show!

The race for third was much closer and no less spectacular. Corey and Neil has really clicked with Mike D's on-loan Boss Mustang and qualified in fourth, just behind Keith and Deborah's 'Stang. Behind them, Simon A and Stephen were finding things difficult, Simon driving John's rapid, but tail-happy GT40 and Stephen with Andy's not-quite-right '69 Camaro. However, when the car-owners took over, they upped the pace and started to close the gap to the two Mustangs.

As the clock ticked down, Corey and Keith were in an almighty battle, with the on-loan white Mustang eventually finishing exactly one car length ahead of Keith's orange one. How close was that? Andy's Camaro was a lap and a half back, pipping John's GT40 by half a lap in what had been an intense pedal-to-the-metal final minute duel for fifth place.

All agreed it was well worth the late finish for a memorable high-octane and high-adrenaline Goodwood finale.

Huge congratulations to our first WHO/digital medal winners of 2017 and thanks to everyone who raced so hard and so skillfully throughout the evening. Massive thanks goes to those who came early to set up and stayed late to pack away. It's a big job for a digital night, but we're getting pretty slick at it. Finally, an extremely big thank you to Mike D, without whom we'd not be racing digital at the Barn. 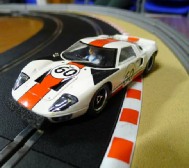 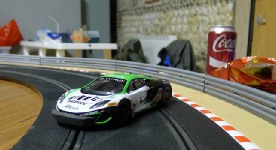 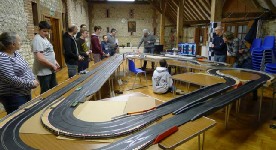 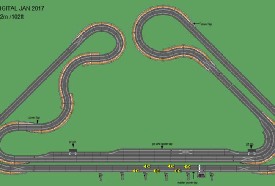 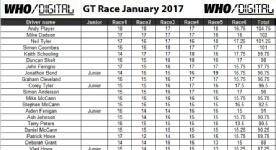 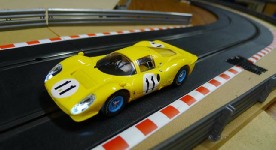 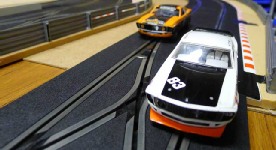 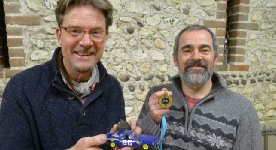 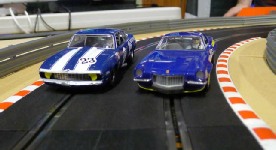 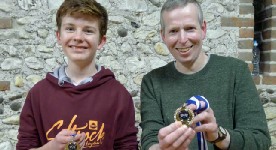