All in all, a great day of SSDC racing and chillin’ out at the Barn, even though we had a bizarre interlude early on which left us all rather unsettled...

Once we got on Mike’s excellent track and immersed ourselves in the familiarity of a Nascar team race, things were very much better.

It was a select bunch for the morning - including the return of Jack after 4 years away and the debut of grandson Isaac - and the team race was almost a pairs race. With four teams, it turned into a battle between Keith & Mike (Straker Industries) and Simon & Duncan (The Tremblers) - although The Avengers were always very quick off the start line…

In the end - as lap scores went up and lap times came down - it was the pair of Mike and Keith who won the race by ten laps.

Nonetheless, Simon was the post-race star and cooked us some excellent WHO Dogs for a very welcome lunch.

Jack and Isaac headed off after lunch, and it was all change as we were joined by a posse of Scalextric World Championship veterans - Rachel, Dave, Sean, Patrick, Sasha and December's SWC race winner Vlad. Plus Gary was visiting the Barn for the first time.

That gave us fourteen racers for our new GT format - everyone racing all six cars and accumulating as many laps as they could.

After a few inevitable teething problems with the new format, we all got into the rhythm of the ‘European’ rotation and really enjoyed the racing - everyone that is apart from Keith who was biting his nails to see if his score was enough to beat the rest of the field…

A string of 14 lap scores put Andy within 14 laps of Keith’s score with just one of his races to go...

Keith's nail biting ended with Andy managing another 14, matching Keith’s total laps score, but not beating it - so they shared the race win. Rachel held her nerve in the very last race of the rotation and won a well-deserved first WHO junior medal.

The GT format worked so well that we had plenty of time for a proper crack at a Goodwood Revival Race. We had three owner-drivers on the grid, plus some lovely loaners from Mike’s American Muscle stable for the other four pairs to race.

Simon's new #12 GT40 looked good and both Mike Mc and Patrick have their own GT40s waiting to be converted to non-mag racing. The Goodwood Revival field is growing.

It was Simon & Duncan's GT40 that just pipped the Galaxie of the two Mikes in the qualifying races, with the pair of Rachel and her uncle Gary being eliminated.

The feature race had a different outcome. The Mikes' Galaxie didn't put a tyre wrong when it really mattered, although they came under late pressure from Andy & Dave's Camaro after the latter two had driven a perfect fuel-conservation strategy…

That Galaxie is an awesome car, but the competition is getting closer. I can’t wait until the next time we run the Goodwood Format - probably in April and/or July.

Huge congrats to all our winners and many thanks to everyone who came along and enjoyed a laid-back antithesis of December's full-on mayhem. Special thanks to Mike who made it all happen and to Simon who expertly played the roles of track-builder, peace-maker, cook and race car driver. 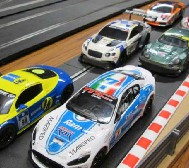 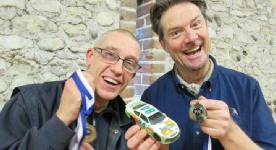 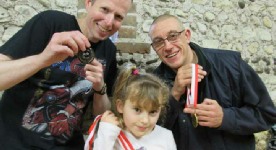 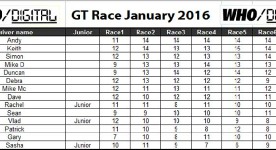 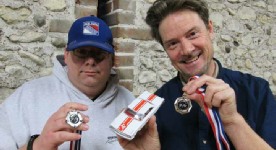 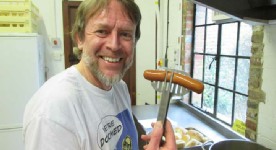