Our February WHO/digital Wednesday saw twenty-six people take to the grid for a Nascar club car team race and a Trans-Am pairs race. The results, RCS64stats and some pictures are on the right, plus there’s a video over on YouTube. Championship tables are on the 2020 season page.

Despite the aftermath of Storm Dennis, plenty of half-term roadworks and the ongoing coronavirus outbreak on this part of the south coast, twenty-six people came along to the Barn for what would be an exciting evening of Scalextric digital racing. We welcomed Waseem for his first digital event, but there were also other digital novices – Ed and John W were back for second go, plus Andy D joined us for the first time in a long while.

The set-up crew made quick work of Mike’s compact track design, which featured an eye-catching corkscrew section at the kitchen end. The two parallel straights were lengthened by a couple of feet to give a total length of just over 110-feet. Ryan and Andy sorted out the Nascar teams using the 2020 WHO/digital driver seedings – and we were ready to race at 7pm with four teams of four and two teams of five. Mike’s grid of five Pontiac Grand Prix and one Ford Taurus looked fabulous – a throwback to the pre-WHO/digital rug racing days.

Daniel and Ash worked out a perfect system on Race Control – the bell signalled a driver change for the five-driver teams and the usual flashing light was used for the others. Teams just had to worry about the fuel simulation for the first twenty minutes, to ease everyone into RCS64. Two teams finished on 64 laps – Daniel, Jean, Peter and Rob getting to the line first, ahead of Oliver, Oli, Matthew, Duncan and Waseem. Three laps behind, Jerome, Mike D, Graham and Steve finished in front of Ryan, Alex S, John F, Mike Mc and Ed. So far so good. Ash, Dean, Terry and Andy D were a further three laps back on 58 laps – six behind the leaders. However, back on 55 laps – nine behind the top two teams – were Alex, Andy P, Simon and John W. They’d lost a lot of time, running out of fuel and unable to pit – but digital racing is a learning process, they could only improve.

Alex’s team did immediately bounce back, smashing out 67 laps with both the fuel and tyre simulations running. That was enough to win the segment and was the top score of the race. Lessons learned, perhaps? Just a lap behind in second place was Ash’s team, also making up ground lost in the first segment. Ryan’s team were third on 64 laps, two laps ahead of Daniel’s team, who would hold the overall lead with 20 minutes to go. Ryan’s team had moved up to second overall, just ahead of Ash’s quartet. Oliver’s team had dropped from second to fourth after a disappointing 59 laps. Jerome’s team had dropped to the back, having scored 60.

It was a tense and exciting finale. Again, Alex’s team looked really strong, battling for the lead with Oliver, Oli, Matthew, Duncan and Waseem. Coming from fourth and fifth place overall, they both had ground to make up on the race leaders. Daniel’s team had to keep the gap within a couple of laps to hold on to their overall lead and win the race. The pace at the front was frenetic – both teams pushing their pit stop strategy to the limit to try and find a crucial advantage. Oliver’s team – in the orange Home Depot car – decided to pit for a splash & dash with about a minute to go. Alex’s team – in the M&Ms yellow Pontiac – stayed out and drove to conserve fuel. The orange car was pushing hard, the yellow one tip-toeing round… As the twenty minutes were up, the yellow Pontiac had already slipped through for one final lap, but the orange car – about ten feet behind – did not, finishing on 65 laps to Alex’s team’s 66. That would be crucial…

With the three segment totals added up, Daniel, Jean, Peter and Rob were the winners on 189 laps. Oliver and Alex’s teams were level on 188, but Alex, Andy, Simon and John took second thanks to finishing first in the final segment. Not only would overturning those ten feet have given Oliver’s team the segment win, an extra lap would have given them the overall race win… Ten feet was the difference between first and third. Daniel’s team had just done enough with their 63 laps. Ash’s team came in fourth on 62 laps and finished in fourth overall – three laps behind the winners. Jerome’s team were fifth on 61 laps, but that was not enough to beat Ryan’s team to fifth overall.

After an hour of racing, four laps covered the top five places – the gap between first and sixth was only seven laps… That has to be the closest six-way battle we’ve had. Huge congratulations to our winners and a big pat on the back for all the racers who gave us such a close race. Team photos and the medal presentation over, it was time for the Trans-Am pairs race.

All twenty-six racers stayed for the Trans-Am race, giving us thirteen cars and no loaners required. Both Ed and John W had prepared beautiful 1971 Camaros for their WHO debuts, Andy D had taken a Pioneer Dodge Charger out of the box. Mike and Graham had switched to the white #11 Camaro, otherwise the cars – and most of the pairs – were the same as last time. Jean would co-drive for Ed and Oli with John W.

A last-minute switch to three qualifying heats did add an extra ten minutes of racing to the evening. The last-placed qualifiers would not make the consolation race. It was a super-competitive qualifying – eight laps covering the top twelve. Ed and John dominated the second heat to take pole with 40 laps, half a lap ahead of Oliver and Ryan. Andy and Ash’s Javelin was tied with Peter and Jerome’s Pioneer Camaro for third. Mike and Graham and Alex and Dean completed the top six qualifiers who would battle for the winners’ medals in the feature race. Before that, would be the mad five-minute dash that we call the consolation race...

This was a frantic and close race that would probably hinge on the half-distance pit stop and driver change. John W was the pick of the bunch through the first half of the race, handing over to Oli at the pit stop. Daniel and Duncan pitted from second and third, Terry from fourth, Andy D from fifth and Alex from sixth – all covered by less than two laps. There were no huge disasters at the stops, but it was Rob – driving Terry’s Javelin – who became Oli’s closest rival for the win. They drove hard and kept their cars on track, Oli finishing half a lap ahead of Rob on 19.75 and 19.25 laps – a pace that would have got both cars comfortably in the feature race. Simon beat Mike in another close battle for third. John F brought the Brut Camaro home fifth and Steve struggled with the big, heavy Dodge – finishing a couple of laps adrift.

The final race was sensational. Ed was first off the line in the Chaparral Camaro, pulling out a gap over Ryan in second and Ash in third. An awkward crash out of turn one put Ash a lap down with a minute of the race gone, Peter moving up to third. A minute and a half in, and Ryan took the lead – still closely followed by Ed, Peter, Graham, Dean and then Ash. The first round of pit stops would be crucial, Ryan comfortably holding the lead, but Ed had problems and dropped to sixth place. Graham and Deane shuffled up to second and third, leap-frogging Peter. Ash made up some ground in fifth. Then the RCS64 weather simulation kicked in, the sky clouded over and the track started to get a little damp.

All six cars were on Hard tyres and they became tricky to drive as the track conditions deteriorated. However, no-one wanted to waste time changing tyres so close to the driver change pit stop. Ryan anticipated half distance perfectly and Oliver was away on Intermediate tyres just as the other entered the pits. Ash stayed out another lap or two and had an empty pit lane to refuel, change tyres and hand over to Andy. Everyone was now on Intermediates, apart from Jerome – who was struggling in fifth place, just ahead of Jean.

With three minutes to go, Oliver had nearly a lap lead over Mike. Alex was a lap ahead of Andy – the top four covered by three laps. Jean was up to fifth, a further two laps back, but was the fastest car on the track. What should have been the final pit stops were completed just before the two-minutes-to-go mark - Oliver still held a useful lead over Mike, but Andy was now right behind Alex and Jean was relentlessly closing the gap. Mike was doing all he could to catch Oliver – he was driving so hard, it didn’t look like he’d get to the end on fuel. Meanwhile, Andy had got ahead of Alex into third, but their epic nose-to-tail battle continued.

As the clock counted down, Mike had no option to make an ultra-rapid splash & dash and hope Oliver ran out of gas. All of the top four were looking marginal on fuel, but only Alex ran out – on the last lap. He’d crossed the line ahead of Jean, so held on to fourth place. Andy and Ash were delighted with third. However, they were nowhere near as delighted as Ryan and Oliver – scoring their second Trans-Am win in a row. A very impressive achievement.

That was the end of the action for the evening. Loads of people stayed behind to pack away in super-quick time. A big thank you to all those who helped with setting up and tearing down. Special thanks goes to Daniel and Ash for their highly-skilled work on Race Control – it was impressive to get through all the racing pretty much on time.

We are back with another Digital Wednesday on 18 March and then our first Digital Saturday of the year on 18 April. 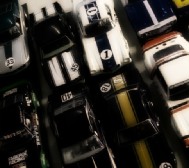 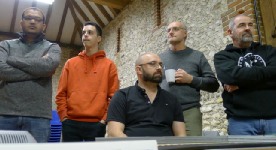 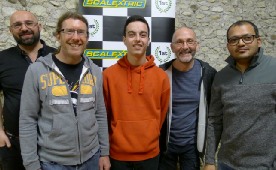 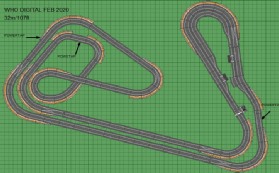 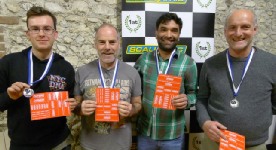 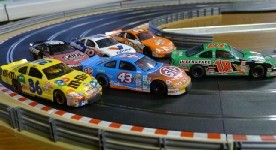 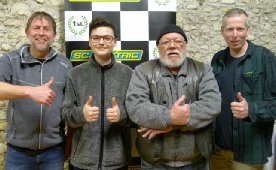 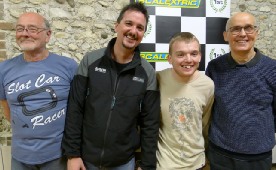 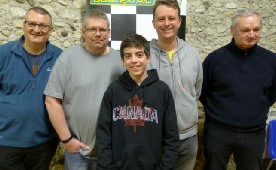 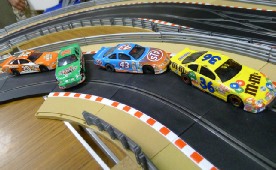 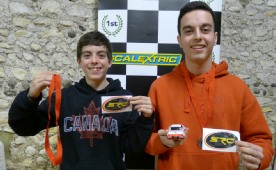 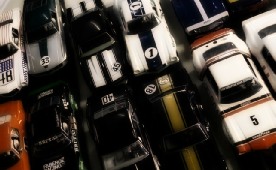 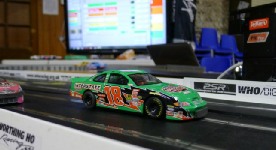 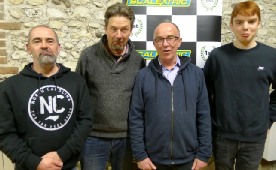 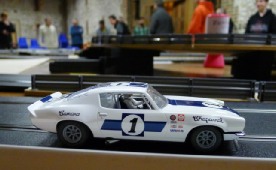 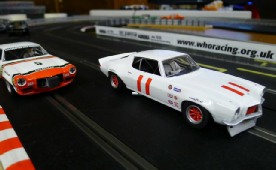