Our second WHO/digital Wednesday of the year fell in February half term. Eighteen people took to the grid for a Nascar club car team race and a Trans-Am pairs race. The results and some pictures on the right, plus there’s a video over on YouTube.

We welcomed eighteen racers to the Barn for our February half-term Digital Wednesday. Five of those were Scalextric digital newbies and three were making their first visit to the Barn. Mike's digital driving school was busy. After a rapid set-up, we made sure that all last month's gremlins had been sorted out (they had) and we even had time to give the two Audi LMPs a shakedown in preparation for the DiSCA oXigen Le Mans 24 hour race in April. Plus Oli popped in to test some of his cars before the first WHO Digital Saturday in June.

Mike's track was a little shorter and more compact than usual, but was very enjoyable, great for overtaking and ensured some extremely close racing...

With eighteen racers on the Nascar grid, six teams of three gave us four stages of fifteen minutes each. Quite a few of our juniors were busy doing other things at half-term, so team names ended up as simply Team One through to Team Six - boring, but fully functional.

Simulations during the first 15 minutes were limited to fuel only. The racing was pretty good from the off with Andy, Rob and Jean (Team Three) leading the way. Their winning total was a pit stop-adjusted 58 laps, two laps ahead of Simon, Matthew and Pedro (Team Four). The rest were close together, between 53 and 48 laps.

Cars were swapped and the tyre simulation added for the second 15 minute race. The idea was to just run the tyre simulation, but race control failed to alter the fuel menu - it was in at the deep end for the newbies and Richard found it rather a handful. Again, Teams Three and Four were the top dogs - finishing level on 54 laps with team Four finishing first - the gap overall still just two. Team Three had fought back after their red car had stopped out on track with a technical fault. Behind the top two, it was as you were - Ash, Terry and Peter (Team One) five laps back on 105 laps overall, five ahead of the two Mikes and Richard (Team Six) who had lost ground in this segment. Team Five - Alex, Duncan and ten-year-old Andrew - were just a lap back and two laps ahead of Jerome, Graham and Adrian (Team Two).

The cars were swapped again for the third stage - first with last, second with fifth and third with fourth. Richard opted out of this one, leaving the two Mikes to set top score of 58 laps. A lap behind were Simon, Matthew and Pedro who managed to take two laps from Team Three, tying the race oval on 167 laps. Mike, Mike and Richard (Team Six) had closed in to a lap of Ash, Terry and Peter (Team One) for third place. Team Five and Team Two were also separated by only a lap in their battle for fifth.

It couldn't be clearer for the final stage - whoever crossed the line ahead out of Team Three and Team Four would win the race overall. Andy, Rob and Jean led from the opening lap, followed closely by Team Mike & Mike and by Matthew, Pedro and Simon. Rob put in a great middle stint for Team Three, maintaining the lead before handing over to Jean for the final five minutes. Jean finished a lap ahead of Mike D and two laps ahead of Simon, giving the win to Team Three. That meant the two Mikes and Richard pipped Ash, Terry and Peter by two laps to take third overall, with Alex, Duncan and Andrew finishing just a lap ahead of Graham, Jerome and Adrian for fifth.

Following team photographs and a medal presentation, Rob, Adrian, Jerome, Pete, Andrew and Richard departed for home. We were left with twelve for the Trans-Am pairs race and we took the opportunity to run six cars for 30 minutes and enjoy the fun of an extended weather simulation. It turned out to be a cracking race.

Ash was the early leader on a damp track in the blue and yellow Javelin. He was first to pit and everyone had been in for fuel by the time the heavens opened at 4 minutes - much earlier than expected. Both Matthew and Ash pitted again for wets, followed soon after by Simon, Graham and Mike McCann. Mike D stayed out with Intermediates on his white Camaro, giving him a two-lap advantage over Ash and Graham. Simon had been right up there too with the big black Charger, but a loose rear wheel dropped him to last place.

The deluge ended at the ten minute point, but the track remained wet. Everyone stayed on wets, with Mike McCann the first to change to Intermediates, followed by Mike D. As we approached the halfway stage and the driver change, Mike D's Camaro was three laps ahead of Ash's Javelin and Graham's Mustang. Matthew's orange Camaro was two laps behind Graham, Mike's Mustang was struggling in the wet a further six laps back, just ahead of Simon's Charger, which had required more pit work (aka super glue) on the loose wheel.

It looked good for January's Trans-Am winners as Mike handed the white Camaro to Jean with that three-lap lead over the Javelin, now in the hands of Andy. However, Andy gradually ate away at Jean's lead on a drying track, aided by a slow pit stop for the Camaro. Andy changed to Soft tyres on the still damp track and closed right up until the two leading cars were running side-by-side lap-after-lap, dodging the slower traffic.

Both had less-than-perfect pit stops, Andy mistakenly coming out on wets with five minutes to go and was unable to push. Jean managed to maintain a half-lap lead. Both drivers also had a few alarming moments on track, but when both made their final stops, they sat nose-to-tail in the pits with just under three minutes to go. It was Andy who refuelled and changed tyres the quickest, exited first and led by nearly a lap by the time Jean got going.

Behind them, Duncan was getting the best out of the Charger - now with four wheels - moving past Terry, who'd swapped to his Javelin and Pedro who had taken over Matthew's Camaro. However, Duncan was still nine laps behind Alex in Graham's Mustang - Alex closing in a little on the battle for the lead and setting the fastest lap of the race.

As the final minute ran down, Andy moved the Javelin to the back of the white Camaro and stayed there, just under a lap ahead. The chequered lap came out at thirty minutes and Andy crossed the line with 124 laps, Jean with 123 and Alex 121. Duncan brought the Charger home with 112 laps, with Pedro just two laps behind. Terry and Mike clocked up 103 laps between them. Andy and Ash were utterly delighted to bring the Javelin home for its first win on its seventh WHO appearance.

Congratulations to all our winners and a big thank you to everyone who came along and made it such an exciting and fun evening. Special thanks goes to the set-up team and to all those who stayed behind to pack away - and to Barbs who did some magnificent marshalling, as always. Of course, we wouldn't be racing digital at the Barn without Mike's generosity and enthusiasm - thank you Mike!

We're back for more Nascar and Trans-Am action on Wednesday 20 March. 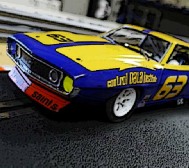 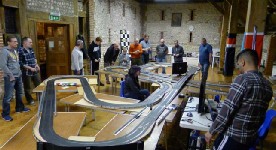 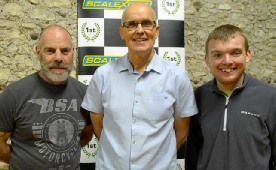 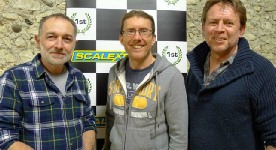 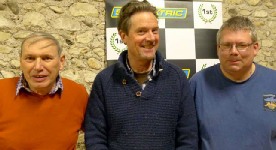 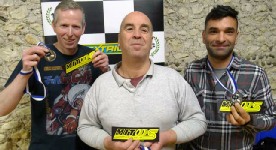 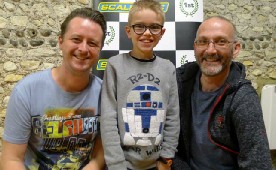 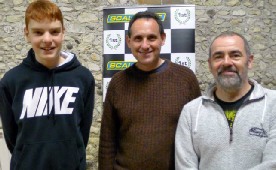 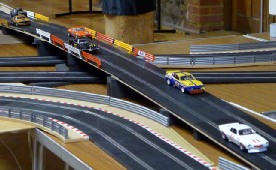 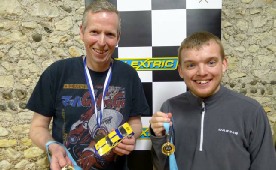 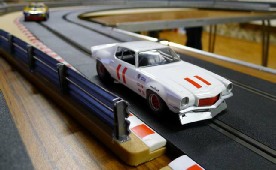