An excellent 28 racers took part in an other action-packed Scalextric Digital evening at the Barn - our twenty-fifth WHO/digital event. The results and some pictures are on the right, with more pictures via the Flickr button. A video of some of the action can be viewed via the YouTube button.

We had 28 racers at the Barn for our twenty-fifth WHO/digital event. We welcomed Gary, Scott, Steve and Paul for their first taste of WHO action in the Nascar team race, with Joe joining us for Trans-Am.

Mike D had designed us an exciting track with two super-long straights that required heavy braking at the ends, plus a technical loop through the start line and pit complex that required careful control. The highlight for me was the corkscrew corner that looped up and over the pit exit and on to the first long straight. Good lap times were low to mid eleven seconds for the Nascars and about a second quicker for the top Trans-Ams.

After the traditional Dadson's digital driving school and a driver briefing, the Nascar team race kicked off at 7.10pm. The twenty-seven drivers were split into three teams of four and three teams of five. Each was captained by a junior racer and had two seeded drivers - one from a pot of the top six grown-ups from the 2017 Nascar championship and a one from a second pot of six other WHO/digital regulars.

With the wiggles after the start line, it was not surprising that there were a couple of offs in the first few seconds of the hour long race. However, things soon settled down into a good rhythm. Steve W drove first for Jonathon's Jamaican Bobsleigh Team; Corey took the first four minutes for Corey's Crashers; Jammie Dodgers had Terry at the helm; Ryan led his team from the front; as did Aiden for "What is a team name?"; and Ash was given the nod by Jerome to lead off the Skeleton Crew.

Up to the first driver change (4 minutes for the five driver teams, 5 minutes for those with just four), things were pretty even, then "What is a team name?" pulled away a little and Ryan's team slipped back after some pit stop woes. Only the fuel consumption simulation was switched on for this first 20 minutes. At the end of the segment, Aiden - with Simon, Pete and Jean - was three laps ahead of Skeleton Crew, Jamaican Bobsleigh Team and Corey's Crashers, the Jammie Dodgers were a further lap back and Ryan's team were seven laps behind the leaders.

The start-line adrenaline caused more carnage at the first corner at the start of segment two. The teams had swapped cars - first with last place, second with fifth and third with fourth. As the race settled down, it was the Skeleton Crew in the orange Home Depot Pontiac taking the fight to Aiden's quartet in the white-ish Tropicana Ford Taurus. Lap times were coming down, but pit stops were getting longer - teams now having to change tyres as well as refuelling. Team work was crucial to keep an eye on fuel levels and tyre wear and to choose the perfect time for a pit stop.

With almost identical fastest laps and the same amount of time in the pits, it was no surprise that Skeleton Crew and Aiden's team finished on the same lap, the Home Depot car just ahead on the track. Those were the top two teams and would go into the final segment separated by the three lap gap from the first twenty minutes. Three laps behind the top two, the Jamaican Bobsleigh Team came home third - that would leave them six laps off the overall lead. Probably out of the hunt for the win were Corey's Crashers and Jammie Dodgers who both finished eight laps off the pace. Ryan's team were a further lap behind.

The maths was simple, Skeleton Crew had to pull back three laps and finish ahead on the track. They had the yellow Penzoil Ford, Aiden's team had the green Go Daddy Chevy - both of them good cars to drive. However, it was Ryan who set the early pace with the Home Depot Pontiac. He'd started each segment well, but his teammates had failed to keep up the momentum. Ryan held a small lead up to and after the first round of pit stops, the other five cars locked together behind. We'd started the segment with a damp track and all but Corey's team chose intermediate tyres. The weather forecast was for sunshine...

At half way, the Skeleton Crew had a lap lead over Aiden's team. Could they stretch it to the three laps they needed? Corey's Crashers - now also on intermediates - were in third, with Jammie Dodgers and Ryan's team neck-and-neck for fourth. In last place were the Jamaican Bobsleigh Team, their hopes for a win replaced by fears of losing their third place overall.

In the final ten minutes, on the drying track, Aiden's team well and truly hooked it up and the Skeleton Crew got stuffed. Jerome, Mike, Ash and Gary put together the sixth best score of the night and were clear second in the segment, but they were six whole laps adrift over the twenty minutes, nine laps behind overall. Aiden, Simon, Pete and Jean's score of 84 laps was the best of the race and within that was a 11.038 second lap - the fastest lap of the evening by a Nascar. The Jammie Dodgers came in third, ahead of Corey's Crashers and the Jamaican Bobsleigh team, who'd recovered well. Ryan's team were sixth.

Huge congrats to the winners and the valiant runners-up. Jamaican Bobsleigh Team did manage to hang on to third, with Corey's Crashers and Jammie Dodgers ending up equal on laps, but Corey's car was ahead on the track and grabbed fourth. Despite some great driving by their captain, Ryan's team were sixth. Medal presentations and team photographs concluded, it was time to move on...

The entry list of twelve cars was the biggest ever for a Wednesday evening pairs race. It would mean two full grids for the ten-minute qualifying heats and then a five-minute consolation race, followed by the ten-minute feature race. Lining up for our second Trans-Am encounter were seven Chevy Camaros (six Scalextric and one Pioneer), two Fords (a Falcon and a Mustang), a Mercury Cougar and two AMC Javelins.

The first qualifying heat saw Ash and Andy's Javelin give Mike D and Jean's race-winning Falcon a run for its money. Right up there too was Oliver and Ryan's new 1970 Camaro, showing a lot of pace and good racing. The Falcon finished on 46 laps, the Javelin on 44 and the brothers' Camaro on 43. Those three pairs would be safely through to the feature race, surely? Biting their nails were Alex and Jonathon, whose Pioneer Camaro finished on 40.75 laps. Staring the consolation race in the face were Graham and Jim (Mustang) and Steve and Joe (Cougar).

However, the pace of the opening part of the second heat did not look near as fast as the first. The exception was Neil and Corey's 1969 Camaro, which was rapid and skilfully handled. They smashed out 42 laps to qualify fourth overall. The others would have to seriously pick up the pace, but Aiden and Terry in second only managed 36 laps - nowhere near enough to put them in the feature race. Alex, Jonathon, Graham and Jim all breathed a sigh of relief.

That left five of the pairs from the second heat in the five-minute quick-fire consolation race. All of them would start behind Steve and Joe's Cougar, which was sixth in the first heat. It was a very close final - all six cars running on the same lap until Mike and Daniel suffered pit issues and dropped back. Perfectly judged one-stop races by the Sunoco Camaros of Thomas and Ben (#6 car) and Simon and Matthew (#9 car) left them out front. Having just lost out on the win last month, the youngsters were delighted to finish in first this time, half a lap ahead of Matthew and Simon. Aiden and Terry ('69 Camaro) just edged out Steve and Joe for third. Gary and Scott (AMC Javelin) were a lap back in fifth.

The top two qualifiers shot away from the front of the pack at the start of the feature race. Ash's Javelin led Jean's Falcon through the first couple of laps until they crashed into each other in the wiggles. Jean rejoined mid-field, Ash at the back of the pack. Approaching half distance, Graham led Jean by a lap and Ryan was right behind in third. Neil was a further two laps back in fourth, on the same lap as Ash in fifth and Jonathon in sixth.

After the driver change, the dynamic of the race changed. Mike D was gunning for Jim and with 3 minutes 30 seconds remaining, he moved the Falcon past the Mustang and into the lead. Corey had moved up to third, two laps back. Oliver was a further lap adrift and being chased down by Alex and Andy. All six cars were covered by just over three laps.

Slightly different pit strategies and some frantic driving made the final stages rather exciting. With two minutes remaining, Mike and Jim were on the same lap, but the Mustang had slightly more fuel. Mike would need to pit again, but would Jim? Andy had moved the Javelin up to third, two laps behind Mike, with Corey and Alex breathing down his neck. Oliver had dropped down to sixth, a lap adrift and almost out of fuel.

Mike put the hammer down, made his fuel stop and still came out a lap up on Jim, who'd got a bit ragged. With a full tank, half-worn tyres and only a minute to go, Mike was good to push to the end. Corey, Andy and Alex had all made their final stops and were all on the same lap battling for third. With time running out, Andy was pushing hard, but an off at the corkscrew ended the Javelin's chances of a podium. Alex was too far back to take advantage so it finished Corey, Andy and Alex. The Javelin did have the consolation of fastest lap, 10.633 - not quite the fastest, that was 10.283 for the same car in the first heat.

Congrats to Mike and Jean on a second Trans-Am victory with the big blue Falcon and to Jim and Graham for recovering from an iffy qualifying heat to take second spot on the podium. Corey and Neil put on a great performance to finish best of the Chevys and that puts Corey top junior in the Trans-Am championship.

A very big thank you to everyone who came along and made it another hugely enjoyable evening of digital racing at the Barn. Special thanks goes to the set-up and tear down crews, plus the race control team. We couldn't race digital without Mike D and the loan of his wonderful Scalextric Digital kit. That was the twenty-fifth WHO/digital event and it keeps getting better.

Our next digital event is in four weeks - another Wednesday evening on 21 March. See you then. 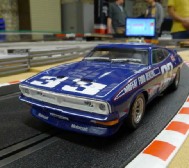 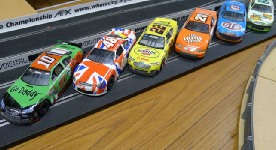 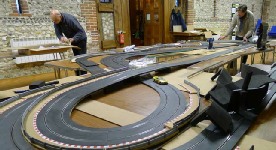 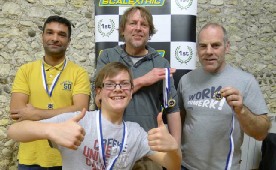 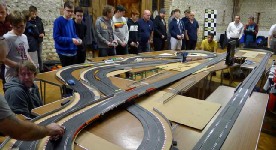 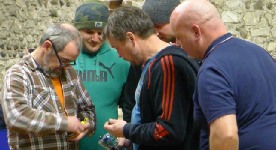 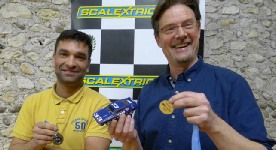 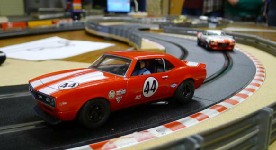 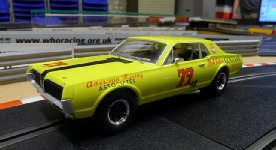 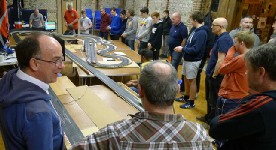 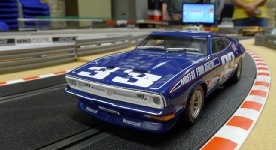 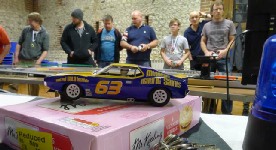 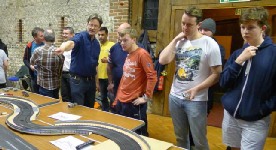 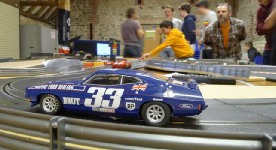