The Saturday before Christmas has become an annual feast of digital slot car racing at the Barn. With the demise of the Scalextric World Championship, this year's event was rather more low key, but no less festive in mood.

After setting up Simon's fabulous track, we welcomed Jack and Finlay for their first tastes of racing at the Barn. And it was excellent to see Jonathon return, exactly a year after his WHO debut. The three of them captained Nascar teams, along with Alex and Ash. In fact, we had three pairs and a pair of threes, although Finlay and Phil would be co-driving, alongside uncle Simon.

The second segment saw the top two draw out their lead and finish level on 72 laps overall. The others remained close together, but now nine laps back. The Flappers shaded the third segment, pulling out a one lap lead over the Humbugs, with the Pudding Wheels finding some form and matching the top two. The final two teams were really struggling to keep up.

The Pudding Wheels really began to roll in the penultimate segment, setting the top score. Behind them there was drama and a crucial turning point in the race. The Flappers were having a poor ten minutes, losing ground to their closest rivals... until disaster struck for the Humbugs. With Keith at the wheel, their car lost its guide pin and it was darned difficult to get it fitted back in. Having lost three, maybe four laps, the car returned to the track, trailing the Flappers by a lap and the Flappers' lead stretching to two laps going into the final ten minutes.

The Flappers only had to defend and Alex did a great job in the first five minutes, pulling out another lap against Jonathon, before handing over to Mike. Push all he could, Keith couldn't make enough headway to put Mike under pressure. The Flip Flopping Flappers took the win by three laps. Still, second was an excellent result for Jonathon and it was more than enough to give Keith the inaugural WHO/digital Nascar championship.

Behind the top two, the Pudding Wheels continued their late surge to finish nine laps adrift, with the Mean Green Team also finishing strongly a further five laps back. Catch the Pigeon came in fifth.

The morning's racing over, Simon conjured up some lunch - his legendary WHO dogs going down very well. Over lunch, we said goodbye to Finlay and Phil and said hello to John, Patrick, Vlad, Sasha and Aiden. The new arrivals all had a good bit of practice, but Sasha decided he'd spend the afternoon on his iPad rather than race.

Fourteen racers meant fourteen heats in the GT race. Everyone would get to race each of the six cars for four minutes. We had the Bentley, the Camaro, two Trofeos and two McLarens - all of them with different characteristics to adjust to.

As always, the GT racing was fast and furious. Andy Player set the early pace - getting the first 18 lap score - but then a mechanical disaster and a 12 lap score seemed to have scuppered his chances. Deborah was the first to finish her six heats, but her score of 83.25 was soon eclipsed by John, whose 98.50 laps looked the target to beat.

Keith knew he only needed to finish ahead of Andy to win the GT championship. He was Mister Consistent and finished on 99 laps, taking the lead and looking good for the championship. Equally consistent, but scoring even higher was Mike D, breaking the hundred lap mark and shoving Keith off the top step of the podium. Andy came back to tie with John for third, but the winners' medal went to Mike, the championship to Keith and a superb performance by Jonathon gave him a well-deserved junior medal, a lap ahead of Alex. Phew!

We now moved on to the final race of the 2016 season. The Goodwood Revival cars took to the track for a bit of practice as car owners negotiated with the guns for hire to give us eight pairs. That meant two qualifying races of four cars each, with the bottom two scores being eliminated.

The first heat had four Chevys - two '69 and two 1970 Camaros. It was the two 1970 cars that set the pace, our GT winners Mike and Jonathon teaming up and beating Andy Phillips and Ash by two and a half laps. Andy Player and Jack were biting their nails a further two laps back and Neil and Corey were particularly nervous, managing exactly 35 laps. Would it be enough?

The second heat was all Fords - with two GT40s, a Mustang Boss and a '68 Notchback. It was a much closer race and the pace looked good. The bottom two from the first heat could only look on and hope... Keith and Deborah's Boss Mustang won the heat and slotted into third behind Andy and Ash. The other three were covered by half a lap - Simon and Aiden on 35.25, John and Alex on 35 laps exactly and Patrick and Vlad on 34.75.

That left us with four pairs covered by half a lap! Patrick and Vlad were eliminated, leaving Neil and Corey tied with John and Alex on laps, but beating them by having a better fastest lap. That was tough on John and Alex, but Corey and Neil were delighted.

The twenty-minute feature race saw Simon and Aiden swap their GT40 for a bright yellow Ferrari 330 P3. They lined up against the four Camaros and the solitary Mustang. The longer race required extra concentration, but everyone did a cracking job. Jonathon lead the way, keeping Deborah and Ash at a safe distance. Jack was doing a great job to hold fourth going into the driver change.

An over-eager pit lane entry meant Ash and Andy's car didn't know it was in the pits. Chaos and confusion dropped them down the field, with Mike stretching his lead over Keith, Andy Player inheriting third and Simon moving up to fourth. Simon and Andy would have a good scrap for that third spot and Andy Phillips would recover to almost join in the battle. However, the race finished like that. It was a third medal of the day - and the Goodwood Revival championship - for Mike and a superb second medal for Jonathon. Huge congratulations to both.

And that was the end of the day - just time to present our first WHO/digital championship trophies and to have twenty minutes of fun on the track before we needed to pack up. A big thanks to everyone who came along and made it such an enjoyable day at the Barn - especially to Simon who designed the track and cooked lunch and to all those who came early to set up (including Duncan, who couldn't stay to race) and the big crew who stayed behind to pack away so quickly.

It has been a great season at WHO and the racing starts again on Wednesday 4 January. Fingers-crossed that Santa brings some exciting slot car presents to West Sussex next weekend. 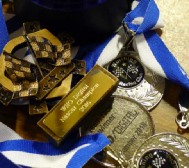 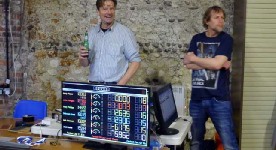 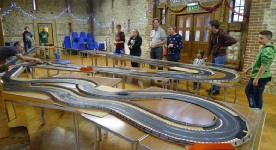 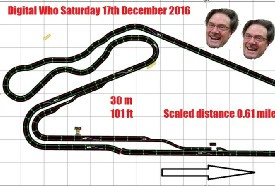 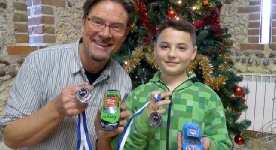 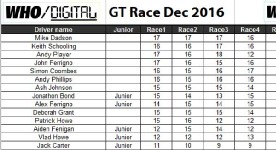 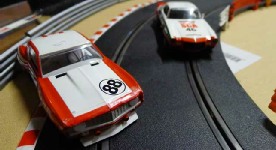 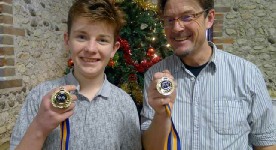 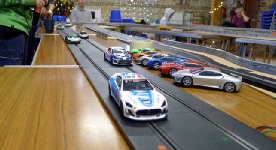 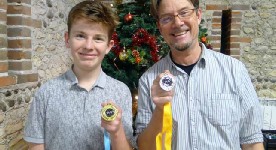 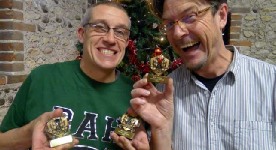 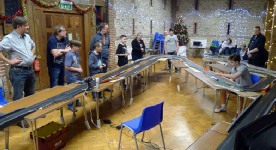 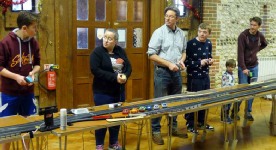