Twenty WHO/digital racers rocked-up to the Barn for a GT/Goodwood Revival double-header. We welcomed Sam and Graham for their first WHO races and it was an excellent surprise to have Ash back racing with us.

Nineteen in the GT race meant nineteen three-minute races, each racer running all six of the ex-Scalextric World Championship GT cars. Mike has converted those rapid magnet cars into nice and heavy non-mag motors, complete with foam fenders fore and aft. It was an impressive fleet, lead by the ultra-cool slammed Stevenson Chevy Camaro.

Mike also gave us a re-work of last May's layout, complete with a double fly-over, a three lane overtaking section and plenty of his trademark sweeping loops and curves. It was, as always, a joy to drive and a challenge to pull off a perfect lap.

After a very useful practice session and driving lessons courtesy of Simon, names were typed in to the computer and our SSDC software ran the next hour and a half of racing with hardly a hiccup.

The first few races were a little scrappy, but the racing soon settled down. Although more than a few cars hit the floor during the evening, the racing was pretty clean, with no penalties being issue under the 'no contact' rule. Not that there wasn't any contact - racing incidents happen - just people behaved themselves exceptionally well.

One tragic accident occurred about half way through, with a marshalling fumble seeing the slammed Camaro hit the floor, pop a rear axle bushing and loosen the crown gear. It was retired, hopefully to return next time out. A replacement Gallardo took over on the orange controller.

Like in January's GT rotation race, the battle for the win looked to be between Keith and Andy. Keith set ultra-consistent thirteen lap scores, whereas Andy's scores were rather more varied, but a fifteen and a fourteen put him up there with twenty-eight required from his final two races.

Those two weren't the only ones right on the pace. Neil was setting the same scores as Keith, but a disastrous race early on left him seven laps adrift of the leader. Aaron, Mike D and John all managed a high score of fourteen laps, but just weren't consistent enough to be right up there in the mix.

It was a case of déjà vu for Keith, chewing his fingernails while he watched Andy race his last two heats. Keith relaxed a little when his rival failed by a whisker to reach fourteen laps in his penultimate heat and then was all smiles when the final chequered flag fell and he'd won by two clear laps.

If that was close, then the battle of the juniors was closer still. Aaron, Sam and Nathaniel were all tied on sixty-two laps. Great performances by all three - we'll have to get some more medals minted!

After a brilliant GT race, a pause in the action was a good opportunity for some of the youngsters to head home ready for school the next day. We waved farewell to Nathaniel, Andy J, Sam, Aiden and Duncan (who's still a youngster for a couple more months), with Ned following after the Goodwood qualifying races, being replaced in the Dadson Ford Galaxie by Graham.

That made it seven pairs and - remarkably - only one loaner car was needed. Keith and Deborah had their new Mustang Boss to join Mike D's undefeated Galaxie, Mike McCann and Jamie in the little GT40, Simon and John raced the Aston Martin DB5, Stephen and Ash the Mercury Cougar, Neil and Andy the Chevy Camaro and the loaner Mustang was shared by Corey and Aaron.

We ran two ten minute qualifying races, with the drivers swapping at halfway. The first heat saw a dominant run of forty-five laps by Neil and Andy in the blue Camaro. The GT40 came in six laps back, but Aaron and Corey had big car problems and managed only twenty-one laps. They needed a miracle to qualify for the six car feature race.

The Cougar was supposed to run in the first, but Stephen realised at the last minute that he'd taken the chip out... A quick refit meant the car was ready for the second heat. And what a race it was! The four cars were never more than three laps apart, the lead swapping on the track and in the pits. The Galaxie was guzzling fuel on this track and a couple of misjudged fuel stops left the big car limping round the track out of gas.

The result of that second qualifier saw Deborah and Keith take the win with forty-two laps, the Aston Martin a lap back, the Cougar on forty laps and the Galaxie on thirty-nine. Corey and Aaron were eliminated, Andy and Neil had pole and Mike's Galaxie took the final qualifying place.

The feature race was also run over ten minutes and was also an absolute cracker. Neil took off into the lead from pole position, but couldn't shake off the pursuing pack. The Camaro, Cougar and Aston Martin were out in front after a first round of fuel stops, but Graham was keeping the Galaxie in contention. As the clock ticked round to the driver hand-over, it was Galaxie - on a completely different fuel strategy - that had the lead.

After the driver change, it was Andy in the Camaro and John in the Aston that started to pull out an advantage. Mike D managed to miss a fuel stop and another crawl round the track sunk the Galaxie good and proper. Stephen was now driving the Cougar and just couldn't keep pace with the front two, although he had a lap or two over his dad in the GT40 and a hard-charging Keith in the Mustang.

Andy managed to extend a half-lap lead into almost a lap - or eleven seconds - and he held that until the end in what was a full-on battle for the win. The Camaro ended on forty-five laps, with the Aston just a lap behind. Stephen had hung on to third, a fine performance by the two teenagers in the Cougar. The GT40 pipped the Galaxie for fourth and the Mustang was sixth - a result that must have been disappointing for Keith and Deborah after their brilliant qualifying heat win.

So that was that. The end of a particularly brilliant night at the Barn. Massive thanks goes to Mike D, without whom we wouldn't be racing digital, and to all those who arrive early to set up and stay late to pack away.

We're back again for another digital evening in July, but plans are already being hatched for an extended schedule of eight WHO/digital races in 2017. 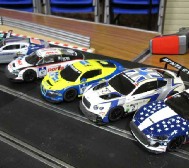 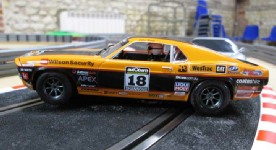 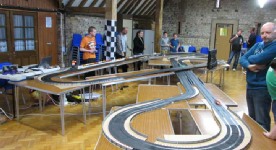 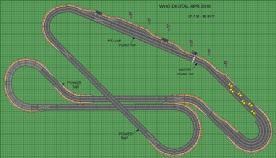 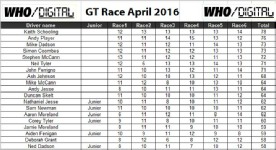 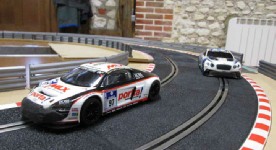 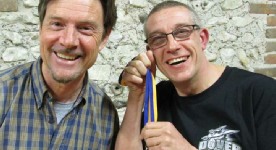 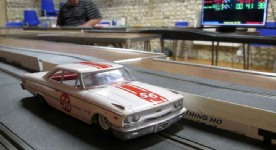 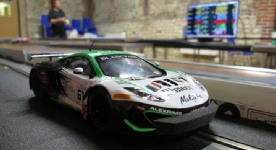 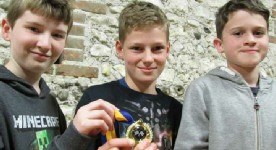 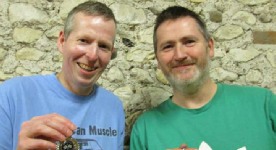 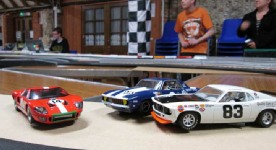 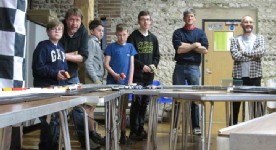 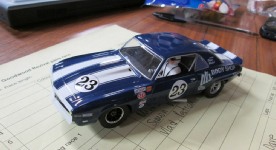