Our fifth and final WHO/digital Wednesday of the year saw twenty-one people take to the grid for a Nascar club car team race and a Trans-Am pairs race. The results, stats and some pictures are on the right, plus there’s a video over on YouTube. The final championship tables are below and on the 2019 season page.

Twenty-one racers came along for our fifth and final Digital Wednesday of 2019. Owen joined us for his WHO debut and it was great to have Mike McCann back and firing on all cylinders. Plus Stephen honoured us with his annual WHO/digital visit.

Simon had designed a fabulous track, perfect for some close, exciting racing with the Nascar club cars and then the Scalextric and Pioneer Trans-Ams. The Barn wasn't free until nearly five o'clock, so a massive thanks to the set-up crew of Mike, Jean, Terry, Simon and Andy for a super-human effort to get everything built and functioning by quarter-past six.

The first action of the evening was the Nascar team race. Five racers were in with a shot of the championship, Simon leading Andy by three points and Matthew by five. Jean and Mike D were long-shots. Ryan and Andy completed the seeded team allocation, giving us three teams of three and three teams of four - all the championship contenders separated.

Stage One - 20 minutes.  The first segment of the race used only the fuel simulation of the RCS64 software. Matthew and the two Alexes came home first with the red Coca Cola Ford Taurus, finishing on 63 laps, just ahead of the pink Exide Taurus of Andy, Terry and Stephen. Two laps back were Simon, John, Duncan and Mike McCann's Home Depot Pontiac, finishing on the same lap as Mike D, Ryan and Dean with the John Deere Taurus. There was then a three lap gap to Graham, Oliver, Daniel and Steve's Dewalt Taurus and another laps back to Jean, Ash, Rob and Owen with the blue STP Taurus.

Stage Two - 40 minutes.  Tyre wear was added to the software simulation for the second segment, making car handling and pit stops rather more complex. Good teamwork become even more important. We usually expect scores to drop a little in the second 20 minutes, but Mike, Ryan and Dean put in a monster 64 laps with the orange Home Depot car. Andy, Terry and Stephen's Dewalt Taurus was a lap back - giving them the overall race lead by just one lap. Graham's team had recovered well with 61 laps and were up to fourth - but the others all had sub-60 lap scores, leaving Matthew, Alex and Alex six laps off the lead in third with just the final segment to run.

Stage Three - 60 minutes.  Weather was thrown into the mix for the final 20 minutes. The track would start damp, then sun and showers were forecast. How quickly any of this would happen was anyone's guess - so strategy, teamwork and precise pit stops would be vital. Most teams started on intermediates, but some gambled early on a switch to hard tyres. Mike D's team was one of those and they were racking up the laps at the front with the STP Taurus. Matthew's team had hard tyres on their orange Pontiac and were close behind, running neck-and-neck with the Exide Ford of Jean, Ash, Rob and Owen. That was the order at half distance, with the teams of Simon and Andy adrift at the back. And no sign of rain, yet...

When the rain came, it came hard. Full wet tyres were necessary almost immediately - there was plenty of slipping and sliding as drivers got used to the new braking points. Out front were Matthew, Alex and Alex - still just ahead of Jean's team. Mike, Ryan and Dean had dropped a lap or two - which appeared suspiciously like a lap-sensing glitch. A close eye was kept, but it didn't look like it would impact on the race result...

The segment was won by Matthew's team, a lap ahead of Jean's crew, with Mike's trio scored three laps further back. The other three teams all finished on 58 laps. That gave an overall race win for Mike, Ryan and Dean, by one lap (or maybe more...). Matthew, Alex and Alex finished second on the same number of laps as Andy, Terry and Stephen. Jean's team were fourth, Simon's team fifth and Graham, Daniel, Oliver and Steve sixth.

The gap between third and the following pack was six laps, which was enough to shake up the final championship places - laps equalling points in the team race table. Simon dropped to third on 901 points, Matthew second on 903 and Andy taking the title with 905 points. Alex F finished top junior.

After the traditional team photographs and prize-giving (thanks to Professor Motor for the stickers) it was time to move on to the Trans-Am pairs race...

All twenty-one racers stayed for the Trans-Am race, which had eleven cars on the grid. Simon was randomly picked for double-duty to partner the partner-less Graham in the Boss Mustang. There were three Pioneer cars on the grid, alongside eight Scalextric Trans-Ams, Simon's Jerry Titus '67 Mustang Notchback making its debut.

Qualifying heats - 10 minutes.  The first ten-minute qualifying heat featured all three Pioneer cars. It was Alex and Dean's Pioneer Charger which dominated the race, setting a massive score of 37 laps. Mike D and Jean's 1970 Camaro was second, half a lap back - then there was a big gap back to Terry and Rob's Javelin on 32.25 laps. The two Notchback Mustangs of Simon & Duncan and Stephen & Owen were looking nervous about qualification, along with Mike and Daniel's '69 Camaro.

The second heat - a five-car affair - delivered plenty of issues for four of the teams. At the front, Graham and Simon qualified comfortably for the feature race in third place. Behind them, Oliver and Ryan managed 33 laps to qualify fourth, but regular podium-finishers John and Alex had serious pit stop woes which scuppered their chances of qualification. Matthew and Steve also missed out after a less-than-ideal run. Ash and Andy just scraped through after their own dramas in the pits and a popped axle bushing.

Consolation race - 5 minutes.  The fast and furious consolation race saw a incredibly close battle between Duncan and Alex from the start. The Brut Camaro moved into the lead courtesy of a gentle nudge past the Mustang and was first into the pits for fuel, tyres and the driver change. However, Duncan delivered payback in the pits - the Camaro de-slotted and Owen found himself second in a Pioneer Mustang 1-2 at the start of the second half of the race.

John took over the Ferrigno Camaro and soon dispatched the first of the Mustangs. The race to the line was a classic - Simon just about doing enough to fend off the hard-charging John. Owen rolled his Mustang right at the end, allowing Matthew to sneak through and claim third by the finest of margins. Mike and Daniel had switched from Chevy to Mercury power for the final and finished on the same lap as third and fourth. John and Alex did manage the fastest lap of the evening, but that was no consolation for missing out on the feature race.

Feature race - 10 minutes.  Daniel decided on some weather for the feature race, a decision that was warmly welcomed. The forecast gave us a damp track to start, rain and then sunshine. Everyone chose intermediates, apart from Mike D who started on full wets. Simon drove Graham's Boss Mustang into the lead on the first lap, followed by Ryan, Dean, Mike, Rob and Ash. Ryan pitted first after two minutes, dropping back to fifth. Simon was still at the front, with Mike, Ash and Dean in hot pursuit on the same lap. Rob's Javelin was two laps back.

The rain arrived just after three minutes of the race had passed - and it rained heavily. Only Mike and Dean were on wets, the others having to drive carefully on intermediates. Nonetheless, Simon continued to hold the lead with six minutes to go, still followed by Mike, Ash and Dean on the same lap. Ryan had dropped one lap in arrears and Rob was still two laps off the leader.

All six cars made their second pit stop at half distance and changed drivers. All changed tyres to wets, apart from Jean who stayed on the original wets and Andy who kept the original intermediates - both benefiting from much quicker fuel-only stops. Jean jumped Graham for the lead and Andy closed the gap to the Boss Mustang. With four minutes to go, Alex was a lap back in fourth and Terry had moved ahead of Oliver for fifth.

The battle at the front was getting intense. The rain stopped with four minutes to go, but the track was only drying very slowly - no-one needed to pit yet. With two minutes remaining, Jean and Graham made a dive for the pits, closely followed by Andy. Jean changed to new wet tyres, whereas Graham went fuel-only. Both cars left side-by-side with an inevitable collision as the pit lanes merged and that saw Graham crash off the track. Andy managed a rapid fuel-only stop, drove past Graham's stricken Mustang and set off after Jean.

The Camaro and Javelin ran pretty much side-by-side lap-after-lap until Jean lost it going into the sharp left-hander before the pits. That put Andy in a clear lead with just under a minute to go and Jean in a battle for second with Graham. The track remained wet, but Andy avoided any temptation to push too hard on the intermediates, keeping it clean to the end. Half a lap behind, Jean and Graham fought to the line, Graham crossing just before Jean. Alex finished a lap back in fourth, Terry four laps back in fifth and Oliver a couple of laps further back in sixth.

As non-racers watched the final stages unfold, they saw Andy's car drop to third on the race screen with a couple of laps to go. As he wasn't passed, fuel and tyre levels were checked after the race and were both fine. The most likely conclusion was a missed sensor reading, so Ash and Andy were awarded the win - not the ideal way to finish such an exciting race, but thankfully enough witnesses to make sure it was the correct decision.

Congratulations to Jean and Mike D on winning the 2019 WHO Trans-Am championship, an impressive performance that saw two race wins and five straight podium places. Alex F finished top junior and eighth overall. Chevy took the manufacturers' title for the second year, this time ahead of AMC, Ford, Dodge and Mercury.

So that was the end of our 2019 Digital Wednesday season. Thirty four racers took part, ten of them experiencing digital slot car racing for the first time. A big thanks goes to Mike and Simon for five superb and different track designs which were built by our fabulous WHO/digital set-up crew. Our Wednesday format was slicker than ever - Daniel was a massive help on RCS64 race control, Ash and Oliver assisting with getting the Nascars and Trans-Ams back on the line. And thanks to all those who stayed late to pack away.

Huge thanks goes to everyone who took part in our WHO Digital Wednesdays this year. We now have three full-day Digital Saturdays to look forward to through the autumn. A final thank you must go to Mike D - without his suggestion of trying digital at the Barn and then the loan of his amazing Scalextric kit, WHO/digital wouldn't exist. The schedule for 2020 - our seventh year - should appear in September. 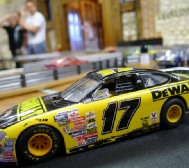 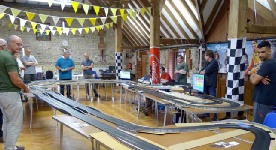 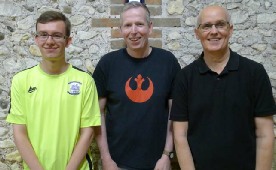 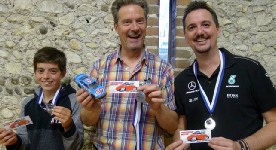 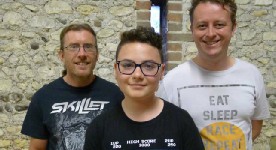 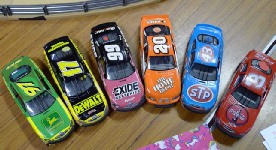 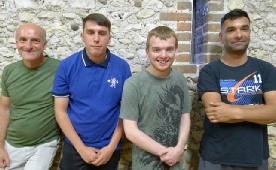 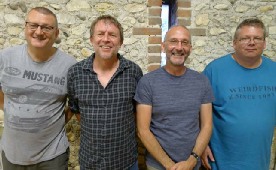 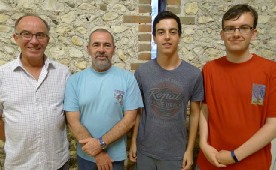 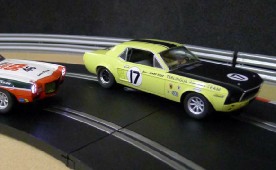 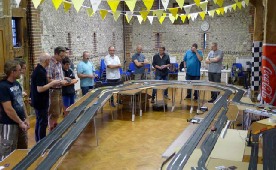 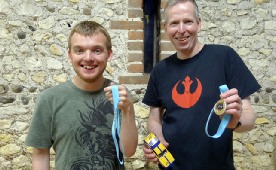 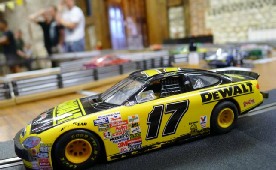 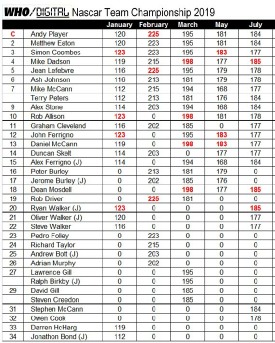 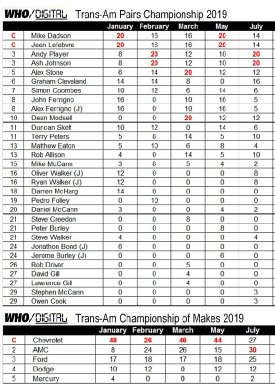