A broken boiler at the Barn failed to dampen spirits for the February half-term Micro Scalextric sprint race. The slightly chilly temperatures might have added a Winter Olympics feel to the evening, but, like Sochi, it wasn't that cold at all.

We did have the option of cranking up a former cold-war jet engine attached to a massive butane canister. Simon had been given training in operating the contraption the day before. However, after a brief demonstration, we decided that the foul smell and decidedly worrying noises were not worth it.

There were a couple of adjustments to the sprint race format and equipment for the new season. First, we'd run with just one set of four cars, so eliminating any bias of getting the 'wrong' car on any lane. Secondly, the controllers has slightly softer springs fitted. And third, step-up finals are now standard procedure.

A change of personnel meant that Duncan and Mike Mc would run race control for the first time together - and what a superb job they did.

It was also great to welcome Ryan and Tommy for their first race at the Barn. Ryan hopes to become a regular at WHO and Tommy is looking forward to more school holiday visits in the future.

And so to the night's racing - who was going to be our Lizzie Yarnold and who would be the Jamaican bobsleigh team?

Ryan was dropped in at the deep end, debuting in the first pair of heats alongside multiple champion John and top junior Ned. And what a debut - he won the first race of the night, breaking the twenty lap barrier in blue lane.

The heats suggested we had three very close car and lane combos, with only yellow being generally disagreeable. However, it was not plain sailing in those other three lanes, with some very patchy results on show. Although twelve of our racers broke the twenty lap barrier in one lane, only two did it three times.

The top two after the heats were Andy and Mike, with reigning champion Simon joining them in the 'A' final. Stephen was top junior, qualifying an excellent sixth.

With step-up finals, we had a full complement in the F final. Jay had first pick of lanes and his favoured red lane proved a good choice. The youngest Skelt romped to victory, beating his father in the process. There was an intense battle for the remaining places, with Alex pipping Tommy for runners-up spot. I'm not sure if Richard was more devastated by coming last or by being beaten by Jay...

The E final saw another great performance from Jay. He very nearly came second, but Corey just kept him at bay. In front of them Jonah took a confident victory. Mike was dumped down to fourth when the blue car's braids went skew-whiff and it ceased to go - which caused a certain amount of concern for those who'd chosen blue lane for the A, B, C and D finals...

The blue car wasn't quite right for the D final - Ryan setting a score four laps off the one he managed in his heat. Otherwise he'd have been right up there. I doubt he'd have beaten an inspired Ash, who turned out his best performance of the night to win the race with a massive score of 21.25 in white lane. Not far behind was Ned, with Jonah third.

To be in with a chance of battling Stephen for the junior medal, Tyler had to win the C final. He put in a magnificent performance to beat Neil, Paul and Ash, as well as setting his best score of the night.

Tyler's win put the pressure back onto Stephen for the junior medal showdown. In the end, Stephen won that battle quite comfortably. However, all that was overshadowed by John setting the biggest total of the night in white lane - a massive 23.40 laps.

That left a pretty tasty looking 'A' final. Pole-sitter Andy failed to leave the line, with the others having nearly a lap on him by the time the blue car got going. Mike was the early leader, with Simon close behind and John finding yellow lane not quite as smooth as his B final run in white.

Then disaster struck for Mike, the red car losing its body shell in a crash and dropping to the back of the pack. This left Simon leading Andy by about half a lap and looking comfortably in the groove in the inside lane. Andy pulled back a few tenths, but then pushed too far. It was all over - Simon was the winner with Andy, Mike and John following him home.

With three team races and two more sprint races to come, there will be plenty of twists and turns over the course of the season. Yet our reigning Micro Scalextric champion couldn't have done any more to ensure a perfect start to the defence of his title.

Congratulations also to Stephen, last season's second-placed junior, who took first blood in the battle for under-16 honours. It was a very well-deserved medal - his first in an individual race.

There's now only a couple of months to the second round of the Micro Scalextric Championship - a team endurance race on Wednesday 16 April. I can't wait. 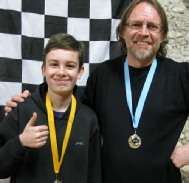 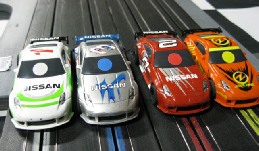 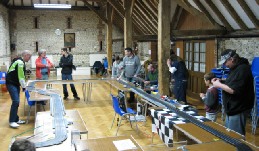 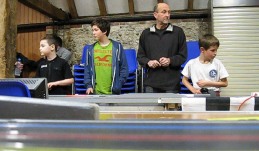 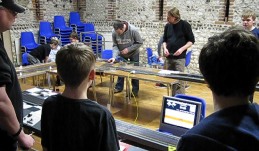 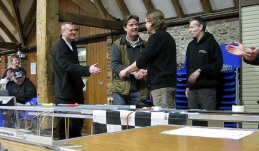 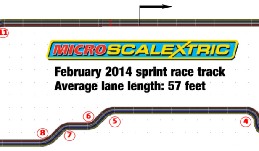 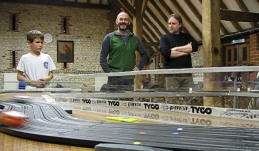