Micro Scalextric team races are a real highlight of the calendar at WHO and our Easter event did not disappoint.

It's also great to welcome new racers to the Barn, so for Owen, Ethan, Jules, James, Josh, Rob, David, Russell and Jude to walk through the door was a brilliant start to the evening.

With the nine rookies making the most of an extended practice session, those of us with a vague grasp of mathematics divided up the racers into teams. We plumped for five teams of three and two of four.

Seven of our juniors - including Ethan, James and Jules - captained the teams, each picking one of our top 'grown-up' racers. The remainder of the names were drawn out of a hat.

Once team names had been decided, we were off racing - every team running fifteen minutes on each of the four lanes. Who would come out on top after one hour's racing time?

The early pace-setters were Team Ash Wheels, with Ash, Mike McCann and Josh having a decent 15 lap lead over the rest of the pack at 15 minutes. Toxteth O'Grady (an obscure 'Young Ones' reference) were best of that chasing pack with Stephen leading the other Mike (there was some confusion over which Mike he had picked at the team selection) plus Rob and Owen.

One noticeable feature of the racing was more crashes and less laps than last time. Certainly having more rookies on the grid was a factor. And we know that those Micro Scalextric braids don't like crashes. But it made a very interesting race, especially as the newer racers started to bed in...

At half way, Team Ash Wheels had extended their lead to 22.5 laps with The Cool Winners up to second. James had Duncan and Tony in his team and they'd put in a big score of 195 laps in red lane to leap up from sixth place. Toxteth O'Grady had gone the other way - second to sixth - but were only seven laps off third spot. It was all very close.

During the third segment, everything changed and the result seemed set. The Cool Winners put together an awesome fifteen minutes on white lane with Tony showing the rest of the field how to run on the tricky inside lane. His teammates followed suit. The 193.75 laps put them 32 laps in the lead over Jules' Jewels, who'd gone ahead of Team Ash Wheels with the first 200 lap stint of the evening.

The top three had daylight - nearly 60 laps - between them and the other four teams. The split also co-incided with the two groups of teams - so it was the group of three teams that were out in front. Perhaps it was that they had a clearer track? A couple of the cars did look a little better (although the stats suggest they weren't that much better). Maybe having just three drivers is an advantage? Or were they just the best teams and the best drivers on the night?

Whatever the answer to those musings, the hard fact was that Jules' Jewels and Team Ash Wheels needed a minor miracle to overhaul The Cool Winners in the final fifteen. The extent of that miracle was 32.25 laps for Jules' team and 36.25 laps for Ash's trio. And James' team had a very decent yellow lane to defend from.

Before that final showdown, we had the battle for the minor places. It was a fierce one, with Toxteth O'Grady just coming out on top, overtaking Blockbusters - Alex, Jude and Andy - to take fourth place. Just behind them were Sonic - Ethan, Gareth and Russel - who'd driven hard for their sixth place. Stuck to the bottom of the pile were Don't Have a Clue, with Corey, Neil, Rich and David having run as high as third in the early stages.

With the clock ticking, the top three teams took to the drivers' rostrum...

The first trio to step up were Jules, James and Josh. The youngest of three, Josh, found blue lane tricky and slipped back, leaving Team Ash Wheels, the early leaders, out of contention for the win. Jules and James both did well, with James comfortably defending his team's 32 lap lead, giving away just a couple of laps.

With five of the last fifteen minutes gone, The Cool Winners looked like they would live up to their name.

At the first driver change-over, James handed over to Duncan and John looked to chase down the lead for Jules' Jewels. Duncan defended hard, but John was absolutely flying in white lane, closing the gap to just 15 laps by the time he passed the controller to Dave.

With John's progress in that middle stint, Dave had the belief that he could do the same. The task of defending those precious 15 laps was left with Tony, the guy who'd done so well in white lane. Dave needed to take back three laps every minute and Tony had to stop him.

Both started strongly, but after two minutes the gap had shrunk to 11 laps. Not quite enough for Jules' Jewels to win. Dave would need to push harder.

And he did, relentlessly setting fast times and lapping the car in the yellow lane. With 90 seconds to go, seven laps were needed to overhaul The Cool Winners. The heat was on.

With 40 seconds to go the gap was three laps, but a rare crash from Dave let Tony escape again. So at 30 seconds, three whole laps were still required. It took another 15 seconds for Dave to get that next lap - leaving just 17 seconds to laps Tony two more times. It looked like Tony had judged his defence to perfection.

It was all or nothing for Dave - he put in a mighty assault and Tony wobbled. Dave passed him again with ten seconds to go and that put them on the same lap. The final pass was made with 3 seconds to go as Tony took a tumble off the track and the two cars finished a quarter of a lap apart as the power was cut for the end of the race.

Remember the gap Jules' Jewels had to make up? Yes, it was 32.25 laps. That quarter of a lap put both teams absolutely level after 60 minutes of hard racing. A tie was declared - the teams would share the win and the medals.

It was an incredible tussle in that final 15 minutes of the evening. Congratulations to Jules, John and Dave for a magnificent comeback. And congratulations to James, Duncan and Tony for standing firm and defending their lead in the face of that onslaught.

Well done to everyone who raced, marshalled and made the evening so enjoyable. The event wouldn't have happened without all those who helped set-up, clear away and run the race. Particular thanks goes to Duncan for anchoring race control so well all night.

We have to wait until the end of the summer holidays for our next Micro Scalextric race on Wednesday 20 August. However, we do have a Scalextric digital day on Saturday 24 May and we have our regular club nights on the first Wednesday of every month - the next being a Nascar race on 7 May, just three weeks away. 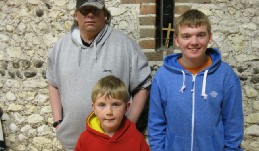 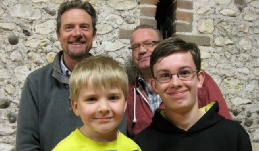 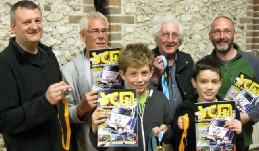 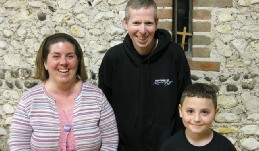 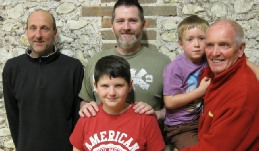 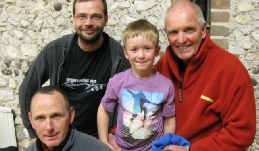 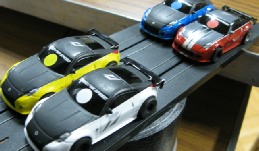 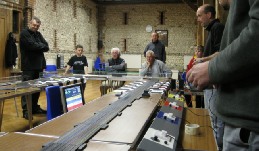 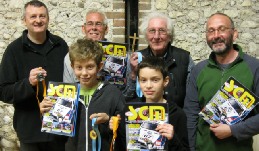 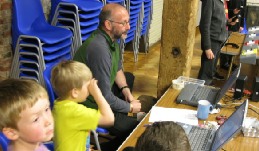