A wave of fiendish colds and sore throats was sweeping West Sussex for half-term, but twenty-four healthy-ish souls made it to the Barn for our Halloween Micro Scalextric team endurance race. We gave a warm welcome to Faye, Jamie and David for their first tastes of WHO Racing action.

The track was a little different, with a Micro version of the Spa-Francorchamps 'old' circuit - a long, fast-flowing drive with the tricky La Source hairpin tucked just inside the main doors. For a change, race control was opposite, rather than next to, the drivers.

Stephen orchestrated the team selection, with eight juniors acting as captains, picking one of the eight leading grown-ups in the Micro championship and drawing the rest of our names out of Ben's hat. Twenty-four racers went very nicely into eight teams of three.

The first four teams got off to a rapid start. Jamie's Skeleton Racers set a blistering score of 132 laps on blue lane, just ahead of Ben's Road Warriors in red. It was no surprise that the middle lanes would be good to drive, but how teams performed on white and yellow - the gutter lanes - would probably decide who'd win and who'd lose the race.

Yellow had a very tricky left-hander at Les Combes and too many offs are just no good for those pesky braids! Scary Spooky - Faye, Duncan and Andy P - managed 121 laps on yellow in that first run, a score which ended up the best effort of the night. Nathaniel's Spectre scored 116 laps in white, not quite hooking up with the inner lane.

When the second group of teams got their first go, Aaron, Neal and Richard - Ghost Rider - showed us all how to drive white, scoring 127 laps, the best of the night on white and putting them fourth overall after fifteen minutes.

Scary Spooky powered into the lead after a strong run of 136 laps in blue - Faye was really enjoying herself. Corey's Pumpkin Smashers also enjoyed blue, scoring 134 laps and moving smoothly up the order. Of the two teams in red, Skeleton Racers - Jamie, Hayley and Stephen - had a disappointing run, whereas Alex's Skelly Bobs did much better and jumped up to second overall.

Of the teams in the gutters, Road Warriors - Ben and the two Mikes - and Oscar's Iron Zombies held up well in white. Spectre - Nathaniel, Simon and Andy J - struggled in yellow and Ghost Rider's team members were simply exasperated by their mis-firing Nissan and that Les Combes left-hander...

At halfway, the field was covered by thirty laps, first and second separated by about three feet and Road Warriors tying with Iron Zombies - Oscar, Tony and Neil - for fifth. We sure like close races!

Although Spectre - racing in blue - set the top score of the night so far (138 laps), this segment was all about red lane. Scary Spooky did okay with 124 laps, but the Pumpkin Smashers - Corey, John and Robin - did much better (131 laps) and jumped into the lead. Ghost Riders had another frustrating run, scoring a mediocre 123 in blue.

Out in the gutters, everyone was struggling. Skeleton Racers, Road Warriors, Iron Zombies and Skelly Bobs - Alex, Andrew and David - all lost ground. However, all the teams where still in with a chance and it would all depend on the final fifteen minutes...

The adrenaline was certainly pumping when the first group of teams started their last stint. Ben and the two Mikes - Road Warriors - absolutely monstered blue lane, throwing down the gauntlet with the best score of the race, a huge 141 laps and breaking the 500 lap barrier overall. A solid run for Scary Spooky in white put them just ahead of Spectre, with Skeleton Racers a fair way back.

Road Warriors' total of 506 laps set a target for the Pumpkin Smashers of 122 laps on white lane - not impossible, although only two teams had managed it so far. Although they had the middle lanes, Ghost Rider and Iron Zombies were just too far back to catch the leaders and the same went for Skelly Bobs in yellow. Although there was still plenty to race for, all eyes were on white lane.

Corey and Robin just about hit their marks, leaving John a target of 45 laps in five minutes. It should have been comfortable for the multiple WHO champion, and a string of early offs didn't seem to bother John at all. Once he got the hang of the lane, the laps were knocked off as regular as clockwork. Ben and the two Mikes still had their fingers crossed, but as the timer hit 21 seconds, white lane clicked round to 122 laps and victory went to Corey, John and Robin.

Huge congratulations to our winners, especially to Robin on his first WHO medal. An extremely competitive second were the Road Warriors, ahead of Ghost Rider, who came back to grab third with an impressive final stint on red. Fourth were Scary Spooky, with Faye our top first-timer of the evening. Fifth were Spectre, sixth Iron Zombies, seventh Skelly Bobs and eighth Skeleton Racers.

What a fun evening it was - thanks go to everyone who took part, especially Neal, Hayley and Tony who helped me set up, to Stephen, Duncan and Hayley (again) who ran the race and to everyone who packed up the Barn so quick that I comfortably got the ten o'clock bus home. 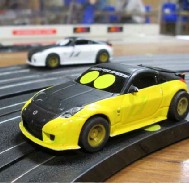 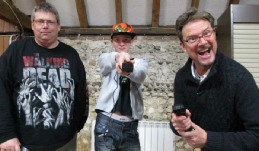 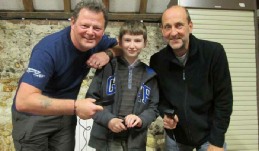 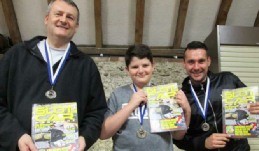 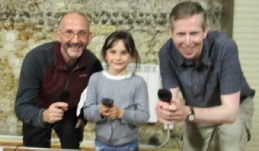 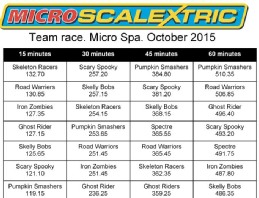 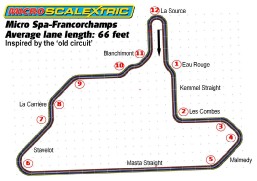 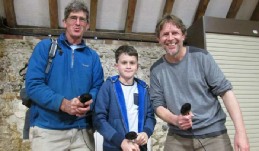 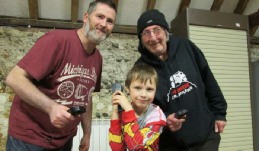 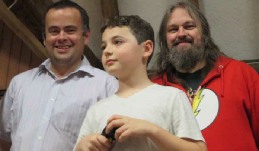 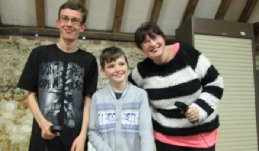