With lots of WHO regulars on holiday, working to cover colleagues' holidays or just out enjoying our lovely south coast beaches, the mid-August race has always been a bit unpredictable in terms of attendance. However, we often welcome new racers looking for something to do in the summer holidays.

This year, we had seventeen racers on the grid. We welcomed Grace, Ewan, Rachel and Graham for their first visit to the Barn. Joe and Mike returned for their second Micro race and Oscar, Andrew and Lucie joined us from Hastings.

There was a nice family vibe to the evening, with only Duncan and Andy not en famille. There were no problems finding six junior team captains - stepping forward were Corey, Alex, Oscar, Joe, Grace and Ewan. They were paired with the top six adult Micro racers - John, Andy, Stephen, Mike McCann, Andrew and Duncan. The remaining five racers - and a blank piece of paper - went in Mike's hat. We ended up with five teams of three and one pair. Lucie drew the blank, so she and Stephen would have a lot of racing ahead of them.

Next were the team names. As we were in the final week of the Olympics, most had an Olympic theme. We had Double Trap (shooting), Omnium Racers and The Cycle Medal Machine (both cycling), Team Hulk (soccer - he played for Brazil), Whitlock's Wheel (gymnastics) and Oscar's Team Boredom - obviously not a fan of the Olympics!

After a half hour of practice on the big and fast Brands Hatch Grand Prix circuit, we were ready to race.

The six teams were divided into two groups to race, each group having their own set of cars, one for each lane. The practice session had suggested that red was a very tasty lane, with the other three a little tricky and white trickiest of all. The plan would be to go for a huge score in red and then go steady on the other lanes, trying not to crash and mess up those pesky braids or get the tyres dirty. In the first fifteen minutes, the two teams on red lane - the Omnium Racers and the Cycle Medal Machine certainly got the job done, with the latter team of Corey and the two Mikes winning the segment and leading the race by eight laps.

Ewan's Team Hulk and Alex's Whitlock's Wheels were next up red lane. Alex was paired with Duncan and Neil and theirs was certainly the strongest team on paper. They lived up to their potential, comfortably winning the segment with the biggest score of the night and jumped into the lead. Team Hulk climbed to second overall with a score just ten laps short of the favourites. Ewan drove really well, keeping the car on track, and was backed up well by Lucie and Andy. Up to third were the Cycle Medal Machine who had discovered how tricky white lane would be, but they made a decent fist of it.

There's nothing quite like seeing three cars racing hard on the same lap, minute after minute. That's what Corey, Oscar and Neil served up for us in yellow, red and white lanes. It was crashy - which made it more exciting - but it was close. After three minutes they were covered by six seconds and at the driver changeover it had stretched to just over ten seconds. Their teammates couldn't carry on the show, but it had been a memorable five minutes. With just one lane to go for each team and everyone having raced on red, Whitlock's Wheels had a 0.10 lap lead over Team Boredom, the Cycle Medal Machine were ten laps back in third, Team Hulk twenty-five laps further back, leading the Omnium Racers and Double Trap.

With such a tiny margin between the top two and only ten laps back to third the tension was massive for the second group of teams. But first was the battle for fourth. John launched the Omnium racers into an early ten lap lead as Ewan and Grace got used to yellow and white lanes. Ewan got into an excellently steady groove and handed over to Lucie with a fifteen lap deficit. Team Hulk needed to get that deficit back down to under five laps to hang on to fourth place, but try as they might, Lucie and Andy couldn't crack Joe and Rachel. In the end, Rachel hung on with the gap of just five and a half laps.

After that nail-biter, we had the battle for the win. From the off, Team Boredom looked out of the race. The other two teams were setting a blistering pace and Oscar just could not keep up in the tricky white lane. Corey was leading the way for the Cycle Medal Machine, up against his dad (Neil) for Whitlock's Wheels. They were neck and neck and keeping the cars on track, but to win, Corey's team would need a nine and half lap lead. As Corey handed over to Mike R and Neil handed over to Alex, it was Whitlock's Wheels with a one lap advantage.

The pace was unrelenting and the two cars were lapping very closely again. Mike moved up and passed Alex, but could not pull out any sort of advantage. With just five minutes to go, both teams were on 74 laps, with Team Boredom back on 59. Mike McCann took over for the Cycle Medal Machine and it was up to him to make something happen. Although the overall gap was too big, the gap on the track remained miniscule. This was an exceptionally exciting fifteen minutes of racing. When the chequered flag fell, the gap was 0.05 of a lap or less than a third of a second, with Whitlock's Wheels winning the segment and the race.

Huge congratulations to Alex, Duncan and Neil. Their team started the favourites, but that doesn't always count for much in these races - they had to make their form and experience count. Second were the Cycle Medal Machine, less than ten laps back. It was a great result for Mike R on only his second race at the Barn. Oscar was a little disappointed not to win, but third was a brilliant achievement for the youngster, along with his dad and rookie Graham. The Omnium Racers' name gave race control plenty of problems during the evening, but Joe, John and Rachel did brilliantly to finish fourth, just ahead of Ewan's Team Hulk - it had been an excellent battle between two similarly-matched teams. Well done to Grace and Stephen for salvaging a good final score after a terrible start - both seemed to have enjoyed spending lots of extra time on track.

Thanks to everyone for making it such a fun summer evening at the Barn, especially to Duncan and Stephen who ran race control so well and all those who stayed behind to pack up at the end. 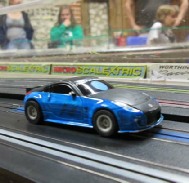 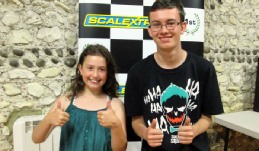 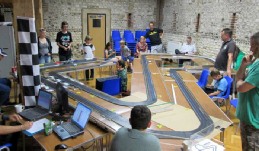 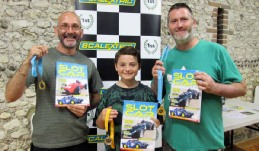 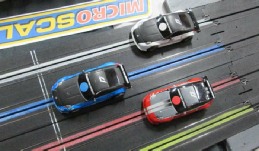 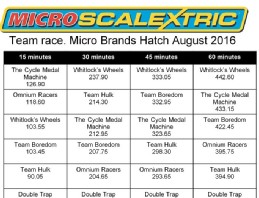 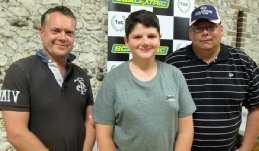 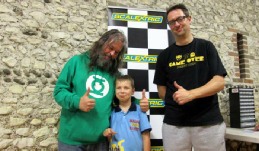 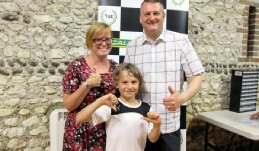 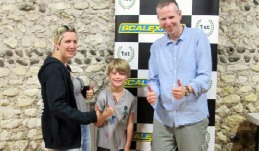 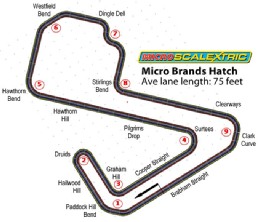 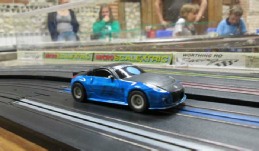